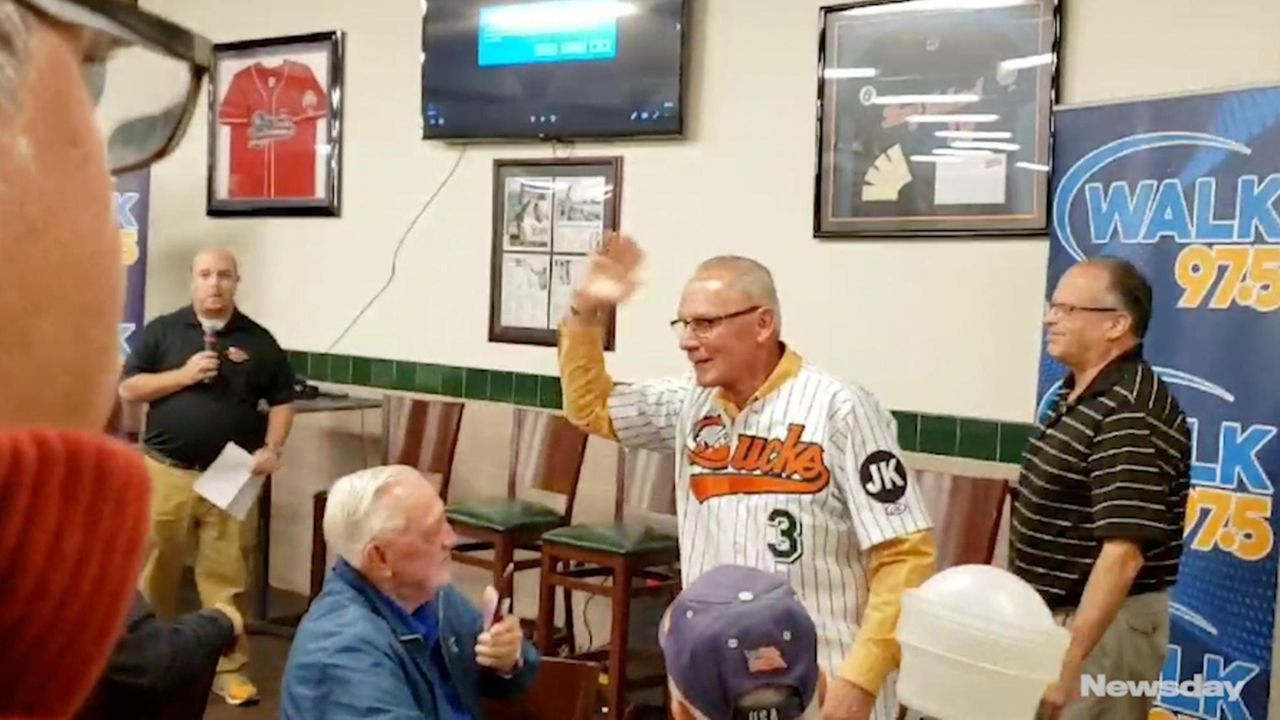 LI Ducks part-owner and Mets great Bud Harrelson made an appearance at the team's celebration for its 2019 Atlantic League championship on Tuesday, Oct. 8, 2019.

Ducks manager Wally Backman was more than happy to talk to fans about the team’s latest Atlantic League championship Tuesday night, but he also couldn’t help but tease excitement for the 2020 title defense.

“I’m thinking about 2020,” Backman said during a question-and-answer session in front of fans at the Ducks’ Atlantic League Championship celebration in a jam-packed Duck Club bar and restaurant at Bethpage Ballpark in Central Islip. “Bring it on.”

After the session, Backman reiterated that he intends to come back and manage the Ducks next season.

“I have a three-year contract here,” said Backman, who finished his first season by guiding the team to its fourth championship in franchise history and first since 2013 Sunday night in Sugar Land, Texas. “My focus is to build a team for 2020 right now. I know we’re going to lose players, and some players might retire, but we have a core that I don’t know that they’ve ever had.”

That core already has started to form. Backman said that the Ducks already re-signed starting pitcher Vin Mazzaro, the former major leaguer who started, and won, Games 1 and 5 of the Atlantic League Championship Series.

Mazzaro, who spent the first half in the bullpen, was moved to the starting rotation in late July and didn’t lose the rest of the season.

In independent baseball, rosters and individual situations can change from day-to-day, much less from October to April, but the fact remains that a core is in place right now.

“Coming into this year, we had [David] Washington, [Daniel] Fields, and Ramon Cabrera, those were the only three position players that we had [signed],” Backman said. “To know that we have multiple players coming back, we can build on that and look for the best players to fill in the voids that we’re going to have.”

But, as much as 2020 was on Backman’s mind, reveling in 2019 was still the order of the hour. Backman told fans that he knew before the season started that his first season was going to end in a championship.

“When I first came here, I talked to [founder and CEO] Frank [Boulton] and I said ‘Frank, we’re going to win the whole thing,”’ Backman said. “He said, ‘Wally, that’s a big statement.’ I told [president and general manager] Mike [Pfaff] the same thing. Fortunately for us, we did.”

Ducks owner Bud Harrelson was the first to be introduced to the capacity crowd. Harrelson, who was diagnosed with Alzheimer’s disease in 2016, threw both fists in the air in celebration as fans greeted him with a loud ovation.

“He was a great coach,” said Backman, who gave Harrelson credit for his bunting success with the Mets in 1986. “He wanted to win as badly as I want to win today. To see Buddy here again today, with the issues that Buddy has, he’s a great person.”