Joe Miloscia poses with daughters Arabella, left, and Chrissy after the three participated in the 1-mile race as part of Long Island Marathon weekend at Eisenhower Park on Saturday, May 5, 2018, to honor the memory of Miloscia's son, Thomas. Credit: James Escher

Joe Miloscia rolled up his shirt sleeve to display the childish scrawl inked on his biceps. It reads “World’s Best Dad,” followed by “Love, Thomas.” It’s a re-creation of a wood plaque Thomas made when he was in kindergarten, years before he got sick.

“No one in the family had a tattoo before, now almost everyone has one,” said Miloscia, a sergeant in the Old Westbury Police Department and a resident of Setauket. “Before” is before Thomas Miloscia died of a rare cancer in October 2015, just days before his 19th birthday.

The “after” is full of grief, but also good deeds, including fundraising events like the Long Island Marathon race weekend.

On Saturday, Joe Miloscia’s tattoo was on the move as he and two his daughters, Arabella, 13, and Chrissy, 15, took part in the 1-mile race to raise money for families affected by cancer. Around 30 friends and family are doing the same — running in everything from the 1-mile race to the half-marathon on Sunday — all to support the Thomas Matthew Miloscia Foundation, said Michelle Milano, a family friend who helped start the charity. 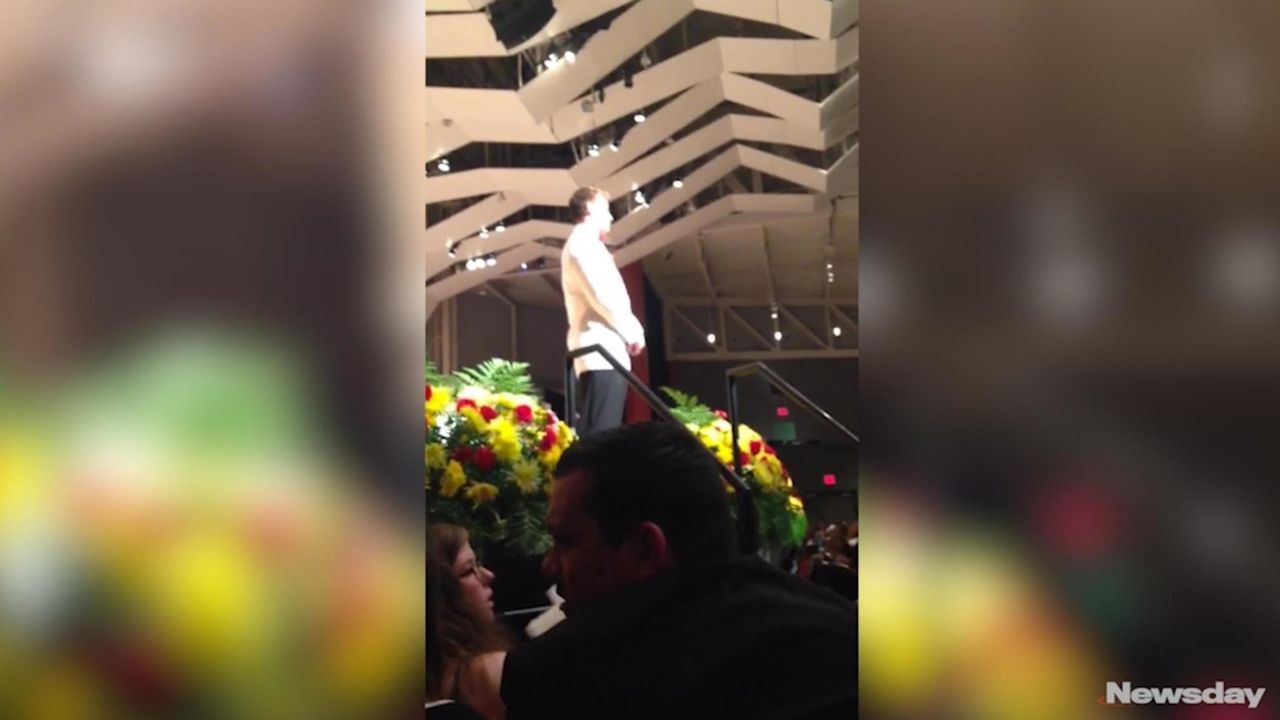 Footage of Thomas Miloscia graduating from Chaminade High School, an LI teen who died in 2015 of a rare cancer Thomas Miloscia was an 18-year-old who died of a rare cancer in 2015. On Saturday, May 5, 2018, his father, Joe, and his sisters, Arabella and Chrissy, ran the 1-mile race during Long Island Marathon weekend at Eisenhower Park to honor Thomas. Their foundation, the Thomas Matthew Miloscia Foundation, provided Newsday with a video of Thomas graduating from Chaminade High School in Mineola - a major feat for the family as Thomas had been diagnosed with aggressive cancer in his junior year of high school.  Credit: The Thomas Matthew Miloscia Foundation

The foundation is growing steadily while providing comfort to families that had to endure what the Miloscias went through almost three years ago.

“Thomas was like a son to our family,” said Milano, whose own sons grew up with the Miloscias, a family of three girls and three boys, including Thomas. “We wanted to do something in his memory, to keep his memory alive and be a tribute to him, and help families struggling for a similar way. There are increased costs that you don’t even think about when you go through that. You go through your life savings.”

Last year, the foundation raised $10,000 toward creating a scholarship in Thomas’ name at Chaminade High School in Mineola, the school from which he graduated, Milano said. This year, that number is $20,000.

In two years since its creation — which happened only months after Miloscia died from a cancer similar to Ewing Sarcoma — a cancer unit at Cohen Children’s Medical Center received 13 X-Box Ones in his name. Kids with family members battling cancer have been sent to summer camp, 50 families were fed as part of a Thanksgiving initiative, and another four families from Stony Brook Hospital’s pediatric hematology and oncology unit received every gift on their wishlist. They also contribute to other charities, such as Make-A-Wish, Friends of Karen, and PALS, a volunteer pilot airlift service that shuttles patients to their treatments. (Thomas himself was flown to Maryland’s Johns Hopkins Hospital for eight months).

So far, the foundation’s Oktoberfest event is its biggest fundraiser of the year — big enough that it will have to move from a residential home to a catering hall this October, Joe said. Donations come from members of the Chaminade community, friends, family and strangers through their website, thomasmiloscia.com. They hope that the marathon weekend will be another consistent draw.

The foundation is a registered 501(c)(k) charity, according to the IRS, and 100 percent of donations go to needy families, per the website.

Joe said they’re just trying to pay it forward. His own daughters were sent to a summer camp when Thomas was sick. They received help and comfort from Chaminade alumni, and from Sts. Philip and James School, which all his children attended, and Arabella, the youngest, still attends.

“We thought it would be something small, a small organization to help people in our situation,” Joe said. “But we’ve grown, and our expectations are that we might even have more to give away (to needy families) after next year.”

Thomas would have wanted people to do this, even if he never got sick, Arabella said. He had dreams of becoming a holistic doctor, and a drive to help others.

“He always put others before himself,” Chrissy said.

“He’d be proud,” Arabella added. “It was in his nature to care for other people. He was the best brother ever. He was so patient. He liked spending time with us and he would always teach me to play things like football and video games. He was pretty much perfect. Words can’t even describe it.”