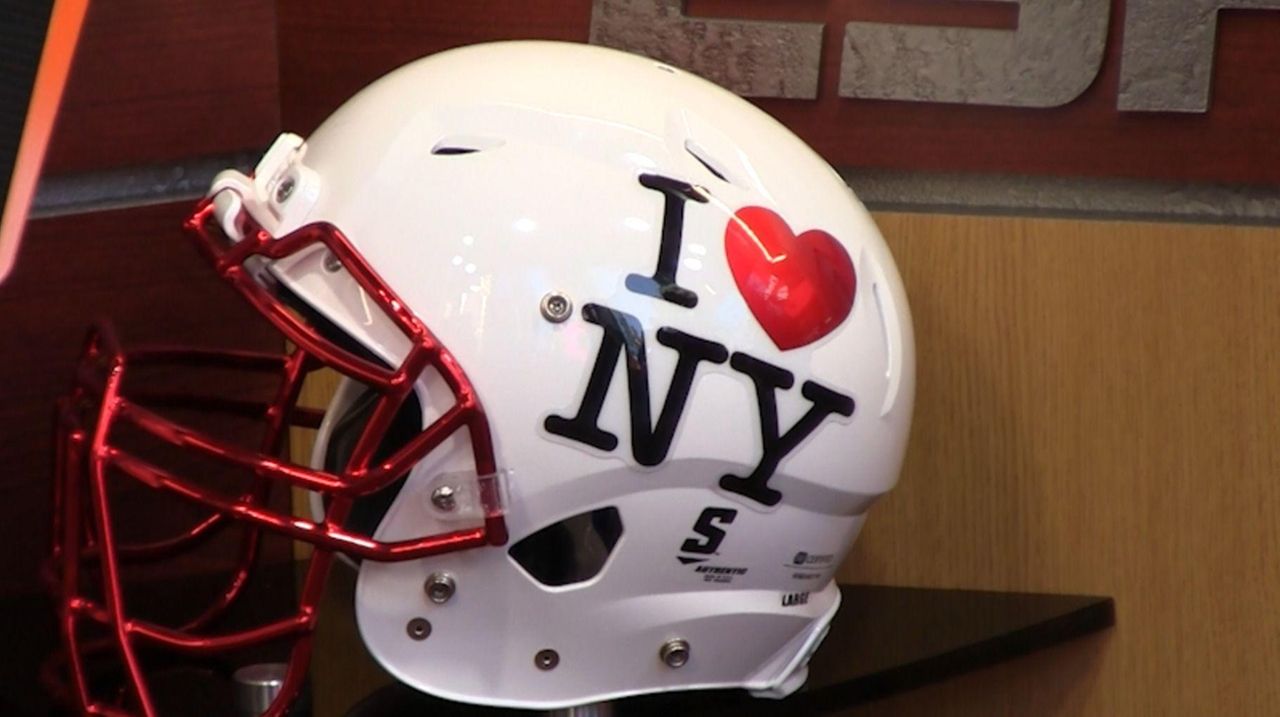 On Saturday, September 23, 2017, ESPN's College GameDay was held in Times Square where college football fans from across the country gathered to show spirit for their team. Credit: Patrick McCarthy

The scenery of a major university will give way to the lights of Times Square. Sirens and car horns will stand in for marching bands. And tailgates smelling of barbecue and beer will be replaced by overpriced casual family dining options.

ESPN College GameDay’s first trip to New York City means a much different setting than fans, as well as cast members, have ever experienced in its 25 seasons of on-campus shows

“I have no idea what to expect,” said analyst Kirk Herbstreit. “I don’t know if it’s just going to be random tourists that are like, ‘What’s going on here? Are they filming a movie?’”

Despite the obvious differences, the GameDay crew is embracing its first New York trip — and shaking off those critical of the decision to come to a city not traditionally known for its college football fanbase.

Herbstreit: TCU could be good bet down stretch

“There’s more here in terms of the history of the sport than people realize,” said host Rece Davis. “The very first attempt to make rules in football happened about a mile from here. I realize there’s not a singular team that everybody roots for like there is in a true college town, but for every Power 5 team in the country, there’s a bar that the alums take over and have that communal experience of college football.”

According to Herbstreit, the idea to broadcast from the city originated from Jennifer Dempster, a former ESPN fitness personality and the wife of former longtime GameDay host Chris Fowler, who became aware of the local bar scene around college football Saturdays when the couple lived in the area. The idea was floated for a few years, once nearly coming to fruition for a Notre Dame-Syracuse game at MetLife Stadium in 2014, according to Drew Gallagher, the show’s coordinating producer.

“My initial reaction was, ‘Hmm, how will that work in the middle of the city?’” Davis said. “But the more I thought about it and the more we talked about it, the more it seemed like a really cool idea.”

Building a set in Times Square proved to be slightly more challenging than normal logistically. Set-up didn’t start until about midnight Thursday, a bit later than usual and a quick turnaround for Friday TV spots, and the side stage and demo field are situated behind the main set due to space restrictions.

“To me, the location and the setting, wherever we are each week, is almost like a fifth person on the set, it’s a character on the show,” Gallagher said. “This week, New York amplifies that even more. It’s New York City, there’s ambient noise, that’s part of it. If you turn your TV on Saturday morning, you’re going to hear New York behind College GameDay, that’s part of it.”

Each crew member said the most unique locations, such as Independence Mall in Philadelphia for Temple-Notre Dame or a trip to FCS power North Dakota State, create the most memorable shows.

“I have a lot of trust in the people who make the decisions of where we’re going. We’ve gone to some places where I’m like, ‘Why are we going there?’ It’s a college campus, but it still didn’t make sense to me,” said analyst Desmond Howard. “We went to Fargo, North Dakota, ‘Why the hell are we going to North Dakota?’ One of the best shows ever. Matter of fact, it was so good, we went twice. So I’ve got confidence in these guys that they know this end of the business, I’m just a soldier showing up where they tell me to go.”

Howard may trust the showrunners’ choices, but some fans were quick to criticize the non-traditional location on social media when it was announced last week.

“Whenever we got to Fargo or Williams College or one of these shows that’s a little bit off the beaten path, I think you’re normally gonna get that,” Herbstreit said. “I get it, we’re very proud of the show and the roots of the show. I needed to be trained myself. Any time we go off the beaten path, I myself have a natural (reaction) like, ‘Wait a second, why are we doing this?’ I’ve learned to buy in, because almost every time we’ve done a show like this, it’s really turned out great. We’re not here just to be in New York City, it’s really here to be here to celebrate the fans and alums of this city. So I think some of the people out there are really misconstruing it and misrepresenting the reality — imagine that on Twitter — or the facts of really what’s happening here.”

Davis managed to turn the negativity into a positive.

“The people who are upset, and I’ve heard from plenty of them on social media, I’m glad, because that means they love the show as much as we do and they feel some ownership and want it to be a certain way,” Davis said. “I think there are some people who are excited and looking forward to seeing what it’s gonna be about. And those who don’t feel that way, I’m glad they care so much because that really is the hallmark of this sport — fans that care, some would say more than they should. But that’s what makes it special.”

Said Howard, “If that’s the worst of your problems, you’re worried about why we’re in New York, life is good for you, my friend.”