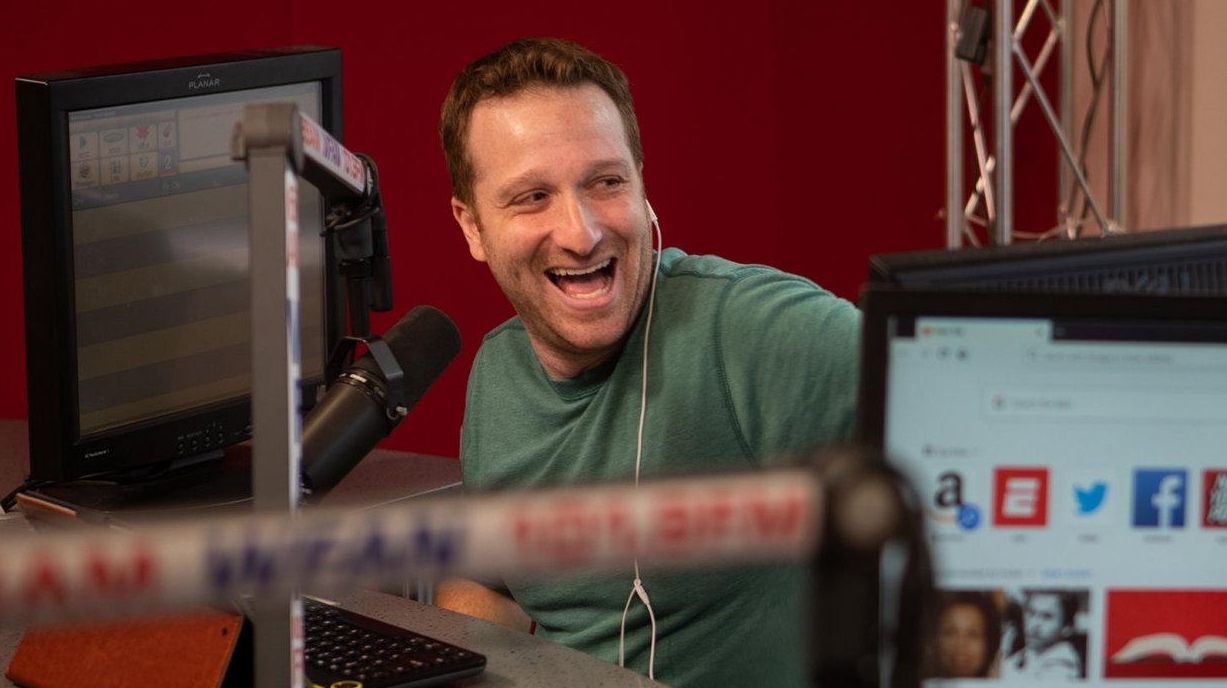 After doing elaborate, make-believe shows in his bedroom as a child in Woodmere, Evan Roberts wrote a letter to WFAN in 1993 that got him a job filling in one day for Mike Breen doing sports updates for Don Imus. Now Roberts is one half of the afternoon drive time team for the station.  Credit: Newsday / Shelby Knowles

Evan Roberts moved into afternoon drive time on WFAN at about the age Mike Francesa was when he got that assignment in 1989. If he lasts as long, he should be ready to move on sometime around 2050.

That sounds like a long run, but for Roberts, it would represent barely half his time associated with the station.

After doing elaborate make-believe shows as a child in his bedroom in Woodmere — “I was strange,” he said — he wrote a letter to WFAN in 1993 that got him a job filling in one day for Mike Breen doing sports updates for Don Imus.

But it was only one stop in a career so precocious that Newsday wrote not one but two stories about him in 1993 alone, and that by age 17 had him give up on a four-year college so he could dive right into radio.

Both of those 1993 stories concerned his work on an old SportsChannel children’s show called “DynaMets!” One recounted an inning of play-by-play he did alongside fellow redhead Rusty Staub during a Cubs-Mets game.

Newsday called him “a 9-year-old, freckle-faced kid with hair the color of a bunch of peeled carrots,” reported his heroes were Gary Cohen and Dwight Gooden, in that order, and that he batted .250 in the Cedarhurst Little League. 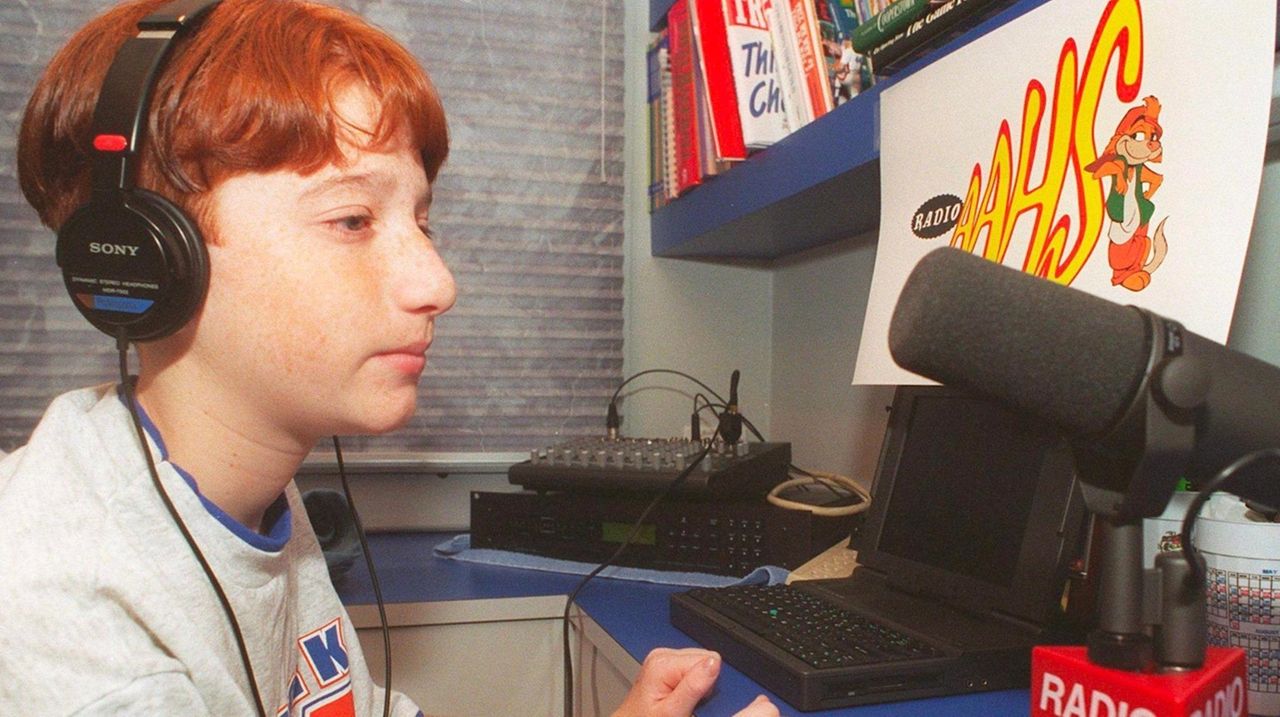 By the time he was 12 or 13, he was hosting a real talk show from his bedroom, on the kids’ station Radio AAHS. The engineer who came to his house to set up for the show later became an executive at XM Satellite Radio.

When Roberts was 17 — after he had hosted another talk show, on WGBB — and about to begin classes at Seton Hall, his old colleague offered him a full-time job at XM that would involve moving to the Washington, D.C. area and giving up on a conventional college experience.

Roberts and his parents agreed some sort of higher education would be wise, so he took enough classes at Montgomery College in Maryland to earn a two-year degree. But that was it.

“It was a tough decision,” he said. “I think my parents were kind of split about it. I appreciate that they let me make that decision.”

Roberts called it “the best decision I ever made, because I learned so much about radio that I hope I still use to this day from my boss at the time, Kevin Straley. He’s like my professor.”

Later, he worked at a station in Baltimore, then moved to Sirius Satellite Radio’s Maxim channel from 2004 to 2006, around the time he also started filling in at WFAN.

In January 2007, he was paired with Joe Benigno, who is 30 years his senior, and the two settled in for the longest midday run in the history of WFAN.

When Francesa first left in 2017, Roberts and Benigno were not offered drive time, but Roberts was not disappointed because he was too busy enjoying the status quo.

“I didn’t cry that night when I found out,” he said. “It was more like, great, I get to keep working with Joe. I signed a new contract at that point, too, so it was still doing my dream job. They haven’t told me to leave yet. This is great!”

Francesa left drive time again in December, and this time the station determined it wanted Roberts on the afternoon show. It considered various co-hosting options, but Roberts’ preference always was Benigno.

“I’ve loved working with Joe,” Roberts said. “I’ve always envisioned that the day he retires, which of course will happen at some point, that will be the day we do our last show together . . . It was always very important that I keep working with him.”

As much as he enjoyed middays, Roberts is enough of a radio geek to appreciate the added prestige, visibility — and salary — that comes with drive time.

“It’s humbling,” he said. “It’s surreal. It’s exciting. It’s new, because it’s a new lifestyle to get used to.”

WFAN launched 10 days before Roberts’ fourth birthday, so he has not known a world as a fan without it. “To be able to be sitting in the same seat as ‘Mike and the Mad Dog,’ obviously it’s a great honor,” he said.

Like many Long Islanders, Roberts grew up a fan of the Jets, Mets and Islanders, and he added the Nets because of their ABA history on the Island, and because his father refused to take him to Madison Square Garden to see the Knicks.

He said his father used to tell him that when the family moved to Woodmere, relative proximity to Shea Stadium was a priority.

“Those decisions before I was born probably shaped me in a big way,” he said. “I think that it led to teams I root for. When you think of the four teams I root for, they all in many ways have connections to Long Island.”

For Roberts, sports fandom and WFAN fandom have been linked from the start.

“One of my biggest memories as a kid was at No. 6 [elementary] school, I was playing basketball one day and somebody had a boom box with ‘Mike and the Mad Dog’ on and that’s when they told us that Mike Piazza was coming to the Mets,” he said.

“I stopped the game, sprinted home to call my dad, I was so excited. So that’s how I got my sports news.”

When Roberts started with Benigno, he was single, living in Long Island City, Queens, and commuting by bicycle to the station’s old Astoria studios.

After that, he began driving to the Upper West Side, parking and biking downtown from there. This month he mostly has been driving all the way to work as he adjusts to his new time slot, but he hopes to return to the old routine come spring.

Roberts said he and his wife were looking for a “J” name to honor three of their parents whose names start with that letter, and that “Jett” was their favorite. He warned her how people would react.

“I said, ‘Just understand for the rest of his life there is going to be an assumption that because I’m a diehard Jets fan, we named our son after the football team,’” he said. “But truthfully, it was the best of the J’s.”

Still . . . “Would we have named him ‘Jett’ if I was a Giants fan? I probably would have voted against it. For example, before we agreed on the letter ‘J,’ she was a big fan of the name Lucas. I said: ‘Not a big fan of Lucas Duda. I don’t know if we can do this.’ ”

(Sylvia is not a sports fan, by the way.)

Roberts accepts that he is not a trained journalist, so he tries to ask questions of guests that he figures fellow fans want answers to, and he is open to learning.

He avidly listens to SiriusXM’s Howard Stern, whom he called “the greatest interviewer in the history of radio. I don’t even think it’s very close.”

Roberts added, “I am a fan. Ultimately, that’s what I am. I’m not a former writer. I’m a career talk show host, but I’m a career fan, is the way I look at it.”

When he was shown a picture of himself doing his Radio AAHS show, he said, “Oh, my God. How did my hair get so not red [in adulthood]? That is some bright-ass redness.”

What would that Evan have thought if you told him how things would turn out for him come 2020?

“I don’t know if he would have believed it,” Roberts said. “WFAN was always the dream. I was going to eventually do whatever I could to get here . . . I think as a 14-year-old, it was still probably this fantastical dream.”

He's one kid who really knows all the scoresWhen Evan Roberts talks, his principal and fellow students listen. A sixth-grader at Lawrence Middle ... The Play-by-Play's the ThingIn his dreams, Evan Roberts, a 9-year-old, freckle-faced kid with hair the color of a ... Baseball boy at the mikeFor 9-year-old Evan Roberts of Woodmere, "Play ball" are two of the greatest words ever ... WFAN's Evan Roberts discusses his careerAfter doing elaborate, make-believe shows in his bedroom as a child in Woodmere, Evan Roberts wrote a ...

Trotz's Game 7 advice to Isles: Embrace the moment
How can the Mets address their starting rotation needs?
Best: Game 7 drama revolves around the fate of Kucherov
The Islanders' history in a Game 7
Highlights: Isles vs. Lightning Game 6
Best: Isles get shower of suds in Coliseum night to remember
Didn’t find what you were looking for?