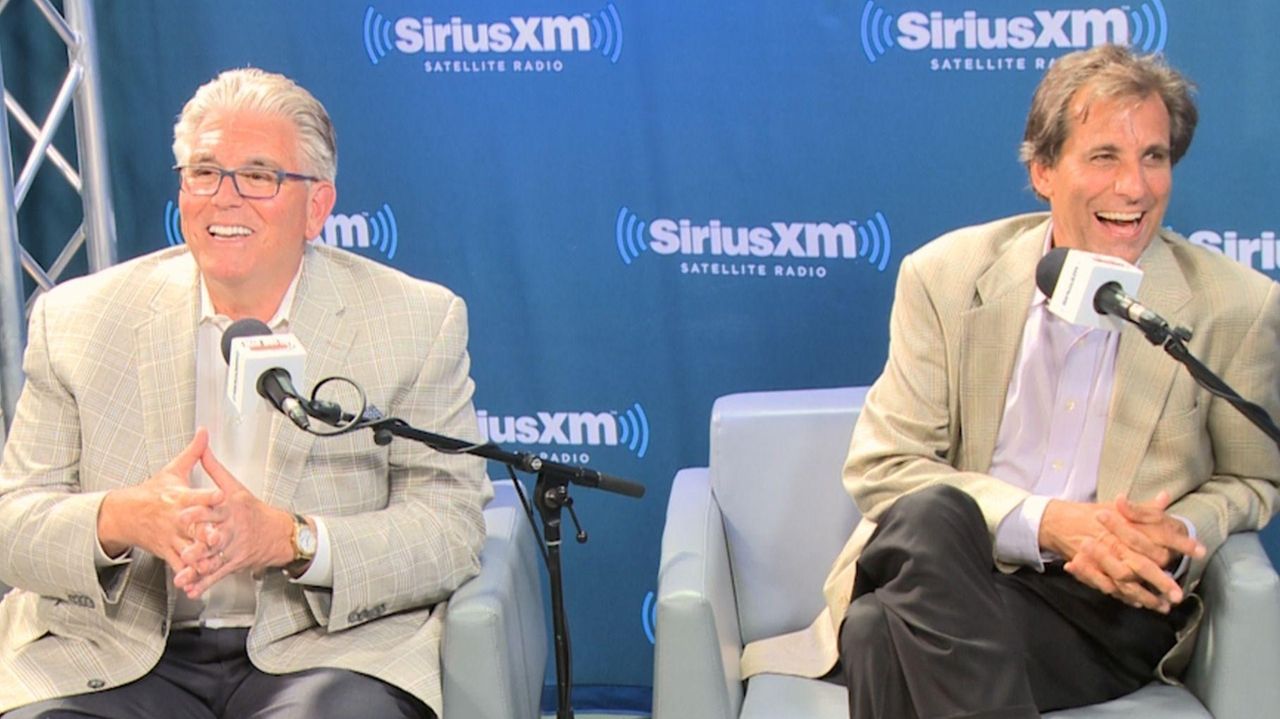 On Thursday, July 6, 2017, Mike Francesa and Christopher "Mad Dog" Russo, the sports radio hosts that put WFAN on the map, reunited for a Town Hall event at SiriusXM in Manhattan. The event will air Thursday night on the Mad Dog Sports Radio channel on SiriusXM. The show was hosted by Chazz Palminteri, and the duo spoke about the "30 for 30" documentary that debuts on ESPN on July 13. Credit: Newsday / Casey Musarra

The “Mike and the Mad Dog” show of old probably is gone for good, but on Thursday, both Mike Francesa and his longtime partner, Chris Russo, laid out what would need to happen for that dream reunion to become a reality once Francesa’s contract with WFAN expires at the end of the year.

“I think we both know we could easily do shows together,” Russo said after holding an hour-long Town Hall with Francesa at SiriusXM studios in Manhattan. “I think we both know we’d be amenable to it if they come up with the right forum [and the right] price . . . I wouldn’t think five days a week now. I think it would be sporadic — maybe one day a week, maybe something around big events.”

The Town Hall, which aired Thursday night on Mad Dog Sports Radio on SiriusXM, touched on a number of subjects, including the upcoming ESPN 30 for 30 documentary on the duo, which will air July 13, and their infamous feuds. But no bad blood remains between the godfathers of sports talk radio, and they say they just recently have begun to understand the full range of their legacy.

Francesa, who isn’t at liberty to speak about any future contracts yet, said he hasn’t decided anything about his future despite talking to a number of people. He agreed that any reunion with Russo likely would not be on a daily basis but said he has “no qualms” about working with him again.

“First someone has to make an offer, which no one has yet,” he said. “But if something comes up, I’ll always listen . . . Who knows? But I’m not saying the economics would work either, so I’ll have to wait and see. I don’t know if there’s something there or not.”

For one thing, Russo said, any reunion would have to work with his pre-existing contract. Francesa termed himself a free agent upon this contract’s end but Russo has agreements with SiriusXM and MLB Network, “so Mike would have to move to this forum,” he said.

With Francesa’s farewell tour around the bend, “I don’t think Mike has quite navigated that yet,” Russo said. “I think once you get past the World Series and into early November, I think Mike would give that some thought.”

Whatever happens, it’s clear the two understand they essentially caught lightning in a bottle during their storied, sometimes tempestuous, always entertaining time together. The show lasted nearly 20 years, coming to a mostly amicable end in 2008 when Russo left to pursue life as a solo act.

“Me leaving probably helped the both of us,” Russo said. “It made people yearn for the reunion . . . [and] I didn’t realize we had this type of impact — my goodness, pioneers.

“Listen, ESPN did a documentary on two radio guys. If I told you 30 years ago that that was going to occur in your career, you’d be satisfied with how your career ended up.”

Francesa, for his part, hasn’t reached the emotional part of goodbye yet, though the documentary, he said, has helped him to reflect some.

“I compartmentalize a little bit,” he said. “When we get to the fall, [the nostalgia] will probably happen. It hasn’t happened yet.”

Parcells believes Schoen is right man for job
K'Andre Miller growing into role on Rangers' blue line
LaMarcus Aldridge can still be go-to guy for Nets
Mets announce coaching staff under Buck
It's a whole new ballgame when it comes to getting into Hall
Isles try to keep things fresh as seven-game homestand begins
Didn’t find what you were looking for?