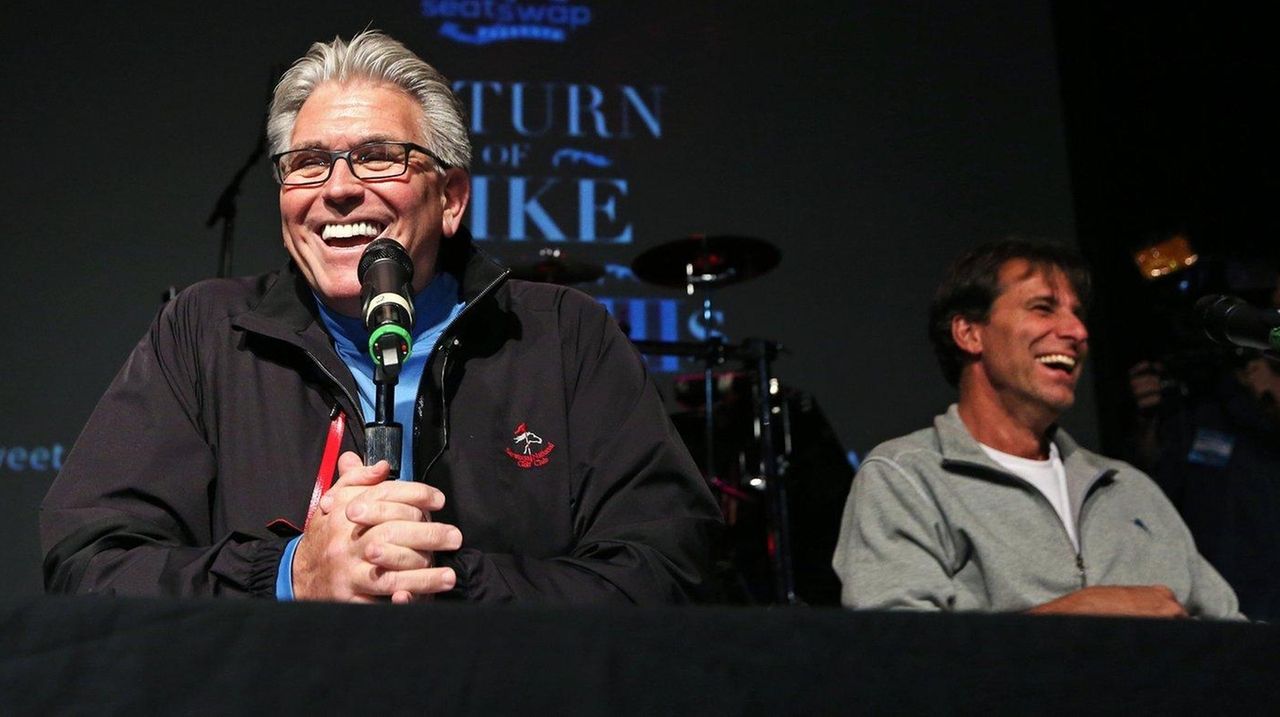 ESPN's 30 for 30 film series takes a look at Mike Francesa and Chris Russo and how their "Mike and the Mad Dog" radio show on WFAN became a success in New York. The documentary premiered at Tribeca Film Festival on Friday, April 21, 2017. (Newsday/Chris Ware)

Mike Francesa knew what the people wanted, and he gave it to them, in the form of a simple but emphatic “yes.”

It happened during a question-and-answer session Friday night following the premiere at the Tribeca Film Festival of an ESPN documentary, “Mike and the Mad Dog,” on his 19-year partnership Chris (Mad Dog) Russo.

Andrea Joyce, who was conducting the interview, asked Francesa and Russo whether they could see themselves “in some form reuniting and giving the fans what they want.”

Francesa answered quickly and affirmatively, to cheers from an audience of about 1,000 fans, friends and family at Borough of Manhattan Community College.

Russo had raised the possibility earlier in the week in an interview with SI.com, rekindling fans’ hopes for a more a regular reunion after brief, sporadic ones in recent years.

“I think it’s possible,” Francesa said. “I really do.”

It is not clear what form it might take. Before the premiere, Russo said on the red carpet that he would love to have Francesa join him on his Sirius XM Satellite Radio show. Russo has been at Sirius since leaving WFAN in 2008.

“The offer is there,” Russo said. “I mean it. If Mike wanted to come to Sirius, and I don’t know if he’s going to want to, we’d figure out how to do some sort of once a week or whatever he wanted to do.”

Francesa reiterated his intention to leave WFAN after Dec. 15 despite reports he might be wavering.

He has an event planned for his next-to-last show Dec. 14 at the Paley Center for Media, and a prime time show is expected to be announced soon for mid-November at the Tilles Center for the Performing Arts in Greenvale.

“It’s a good time to leave,” Francesa said. “There’s nothing left to do there I haven’t done.”

There are multiple hurdles in the way, but both men seem interested in at least considering a limited-form reprisal of their old roles.

The ESPN documentary, which runs an hour with commercials, is to make its television premiere on July 13. Both Francesa and Russo opted not to watch it before Friday.

Afterward both said that director Dan Forer and producer Ted Shaker had captured the show’s essence.

Francesa’s biggest complaint was seeing his long-ago mustache in old video clips and stills. “What was I thinking?” he said.

On the red carpet before the show, both said they were enjoying soaking in an unusual moment.

“It’s cool,” Russo said. “Listen, how many times does a radio talk show host get a red carpet at the Tribeca Film Festival for having a 30 for 30 done? It’s definitely cool.

“History. It’s legacy. It’s one of those things that you’re never going to get to do again . . . If they want to do a documentary on you, you’d have to be an idiot [to say no].”

Francesa called it “an honor.”

“The fact there is a ‘Mike and the Mad Dog’ documentary is pretty weird, and the fact that ESPN would do it is even stranger considering my relationship with them through the years,” he said. “But the series is really well done.

“It’s become a nice way to chronicle history, and I think it will be that way forever, because it really will be great to look back on it in years to come.”

Meet the independent analytics guru helping Stroman, other Mets
With Durant out again, Nets' injuries can hurt postseason chances
Rose manages to bloom again with the Knicks
Rangers know actual points, not style points, matter most in playoff push
Isles focused on Rangers, not three games with Capitals
Jerry Seinfeld returns to Steve Somers' WFAN show
Didn’t find what you were looking for?