Mike Francesa helped revolutionized sports talk radio at WFAN with Chris "Mad Dog" Russo. Nine years since they split up, Francesa remains the top-rated host in New York. After 30 years at WFAN, 2017 is his last. Watch his final year unfold as Francesa's fans, colleagues and athletes from the New York area spoke about what it will be like to no longer have this icon on the air. Credit: Newsday staff) (Photo Credit: ESPN, WFAN

Mike Francesa has been planning his departure from WFAN since 2013, and with a week to go, it has unfolded as well as he could have hoped.

One last Yankees run in October. One last reunion with Chris “Mad Dog” Russo in November. One last coach firing in December — preceded by a grand finale of a rant aimed at poor, soon-to-be-a-footnote Ben McAdoo.

As of Friday, though, after three decades as the blunt, bullying, overbearing, love-him-or-hate-him soundtrack of New York sports, complete with a Long Island accent out of central casting, it will be over.

“It’s been unbelievable,” he said in a recent interview in his lower Manhattan office. “It’s been a great run. It really has. It’s been wonderful. I’ve loved every second of it. I’ve had the best job in the world.”

It has made Francesa, 63, who grew up in modest circumstances in Long Beach, rich and famous, and it has helped grow a durable radio genre that WFAN essentially invented in 1987, a few months before Francesa came on board.

Sure, there had been sports talk before then. CBS Sports’ Jim Nantz, a friend of Francesa, recalled that he got his first on-air experience in 1974 when he phoned into WMCA to talk to John Sterling about North Carolina State basketball star David Thompson.

But no station had been crazy enough to put that on for 24 hours a day. And no one did it the way Francesa and Russo did starting in 1989, with Francesa continuing on alone since 2008.

“He’s dominated for a long time,” Nantz said. “It’s been a remarkable career. I feel very privileged to have seen it all unfold.”

“Mike and the Mad Dog” came along at the right time, as newspaper columnists’ influence began to wane but before the Internet boom, and with the Giants, Knicks, Rangers and Yankees all forging memorable 1990s runs to their leagues’ final rounds. 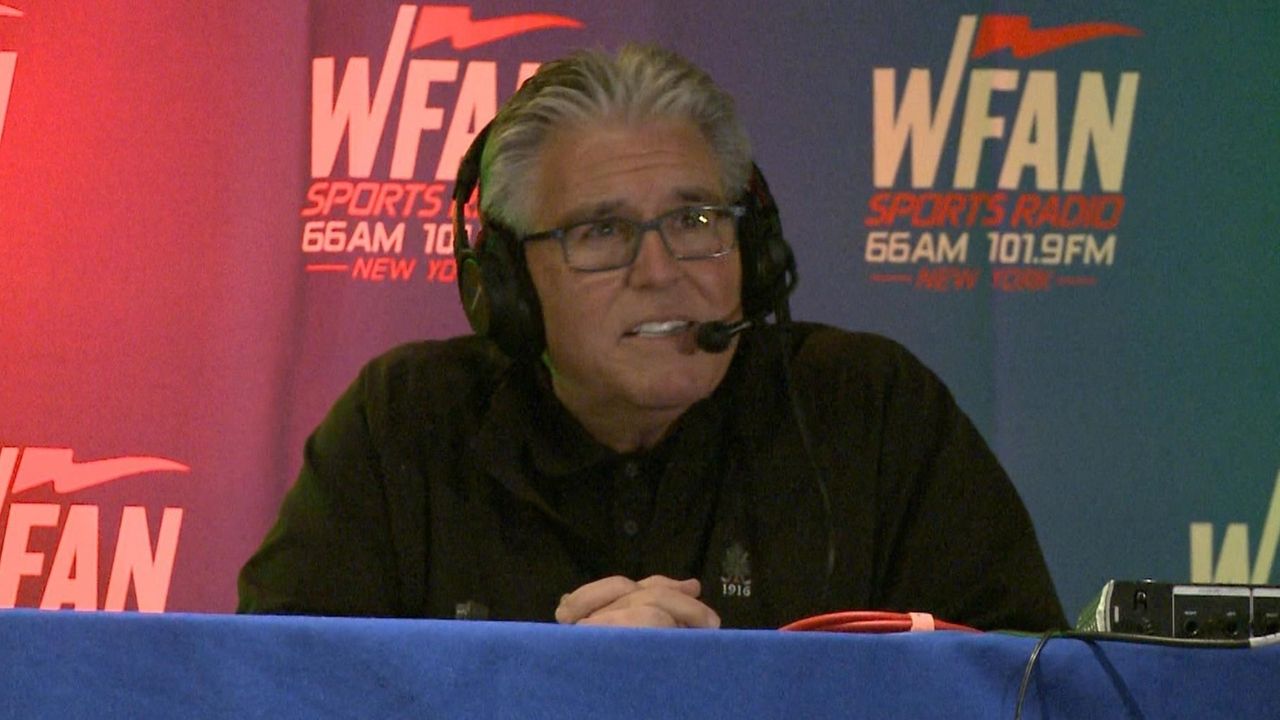 Mike Francesa's final Football Sunday show On Sunday, Dec. 10, 2017, WFAN sports radio host Mike Francesa appeared at Mulcahy's in Wantagh for his final Football Sunday show. Some fans said they woke up as early as 5 a.m. to stand in line to watch the show, as the local sports icon will be leaving the FAN's airwaves on Dec. 15 after 30 years on the air. Credit: Newsday / Casey Musarra

“WFAN was the first 24/7 sports talk, and he and Mad Dog were the stars of it,” fellow Long Islander Bob Costas said. “He’s a very, very significant figure. In a sense, ‘Mike and the Mag Dog’ invented sports talk radio.”

It did not take long for even opposing stars to catch on to the phenomenon, including the most notorious of them all — the Pacers’ Reggie Miller.

“It was cool,” Miller said, “because obviously they were pro-Knick, and they inflamed a lot, which I liked, because the grittier and dirtier and nastier it got, it brought out the best in myself and my teammates. We liked that. We wanted it.

“I’ve always had respect for what [Francesa] did because he’s great at what he does. But when you’re in the ’90s and in the middle of it, you don’t want to hear it. Now that so much time has gone by, it was great theater, and he was front and center for that, which was fantastic.”

Francesa admitted he was “worried” and “very nervous” about maintaining his ratings when Russo departed for SiriusXM Satellite Radio in a bid for autonomy and a break from what had become a strained professional relationship.

“That was the biggest challenge of my career, the first year after he left, to keep it rolling,” he said. “I would have been crushed if it didn’t work out that way.”

For the most part, the ratings held up. But the dynamic changed.

On one hand, without the goofy amiability of Russo, the show lost its personality balance. Francesa became a target for critics who pounce on his inconsistencies, inaccuracies, bullying, verbal quirks, general grumpiness and incidents such as an infamous on-air doze-off.

On the other, the Internet has propelled him to levels of visibility that dwarf even his “Mike and the Mad Dog” days, with fans who call themselves Mongo Nation and an annual festival in his honor called Francesacon.

“It’s part of being the top guy,” Francesa said of the attention, positive and negative. “I became a big celebrity. I don’t know why. I don’t know where it came from. It really happened after Dog left, and it didn’t happen right away.

“I became gold for page hits . . . For some reason I’m Internet gold, and that’s why I get so much attention.”

SNY analyst Ron Darling, who still was a Mets pitcher when WFAN launched, said, “He holds so much power in this town that if he likes you from 1 to 6 [p.m.], you have a chance.

Francesa dismissed the notion that he follows sports less closely than when he was younger and did not have three young children at home. But he acknowledged the “little stuff” that often drives sports talk is of less interest now.

He said a good game still can draw him in, as can an interesting topic such as players kneeling in protest during the national anthem. But he said he finds most debates over player behavior, such as end zone celebrations, “tedious.”

“I don’t care about the players; to me they’re like pieces on the board more than anything else,” he said. “Plus we’re so much older than the players now. I think of them as kids. I have to remember they’re kids sometimes. They’re 20 years old. That’s why they’re acting that way.”

Often, though, it has been his job to weigh in.

“I’ve made my living in this thing, and I don’t want to torch the whole thing on the way out and say, ‘Oh, I’m above this.’ I’m not above this. I love it. I’m not above it at all. It’s just that some of it seems silly at times.”

Francesa and station management had a brief conversation in September about him staying beyond this year after morning host Craig Carton was arrested on federal charges and resigned.

To stay, he said he would have had to be persuaded that WFAN needed him at a time of crisis and was prepared to pay for the privilege.

Francesa has not said what he will do next in media, other than a guest appearance Dec. 18 on CNBC’s “Halftime Report,” his favorite financial news show. On April 1, he will be contractually free to work elsewhere.

Esiason praised Francesa for his legacy and longevity but added, “There’s no irreplaceable person. That goes for quarterbacks, it goes for coaches, it goes for owners. George Steinbrenner has been dead for how long now? [Seven years.] But the [Yankees] franchise is as healthy as ever, if not healthier.

“It’s tough to see an iconic person leave a particular job, whatever that job is, but we always can be replaced.”

That job will fall to Chris Carlin, Bart Scott and Maggie Gray with what promises to be a radically different show. That difference might be a good thing for the trio. Succeeding Francesa will be difficult enough without trying to replicate him.

“He’s as authoritative a figure as there’s been in sports, ever,” said NBC Olympics president Jim Bell, a friend of Francesa. “There are people obviously like Cosell who had that kind of stage and certain sportswriters along the course of history that have had that kind of weight. But I think he’s on the Mount Rushmore, for my money.”

Francesa said the most heartening part of his farewell has been reactions from across generations, of fans in middle age who recall listening in parents’ cars when they were children.

“Radio is very personal,” he said. “That’s one of the great things about it, and people do know you. Listen, they spend a lot of time with you. They understand your personality, which has to come through.”

And now they will move on without him.

“I know there are going to be times when I’m going to be itching to say something or wish I had a platform,” he said. “I don’t know how often that will be. I hope it’s not every day. If it’s every day, I’m going to be back. But I hope that’s not the case.

“I think I have enough varied interests that I will be busy, but until you go through it, how do you know?”

Francesa said he is content leaving the genre in a better place than he and Russo found it, a world in which young people aspire to careers in sports talk.

“That’s what I feel proudest of,” he said. “The job didn’t have a lot of credibility, and now the guy who’s the talk show host is the prominent guy in each town in this country . . . Part of it changed because of the way media changed, the way the world changed, but I think we changed a lot of that, too. I think ‘Mike and the Mad Dog’ changed a lot of that.”

“I’ve preached that these jobs should not be ours forever,” he said. “This is the best job in this town. We created it. Dog and I created it; I maintained it. It’s the best piece of real estate in this town. It is time somebody else gets a chance to see what they can do with it.”

Much has changed in sports and media since Mike Francesa joined WFAN in 1987, shortly after it became the first 24-hour sports talk radio station. What was life like then?

— Evan Roberts was 4 years old, Joe Benigno was a salesman and Boomer Esiason was the Bengals’ quarterback.

— Penn State and Rutgers were not in the Big Ten, which had 10 teams.