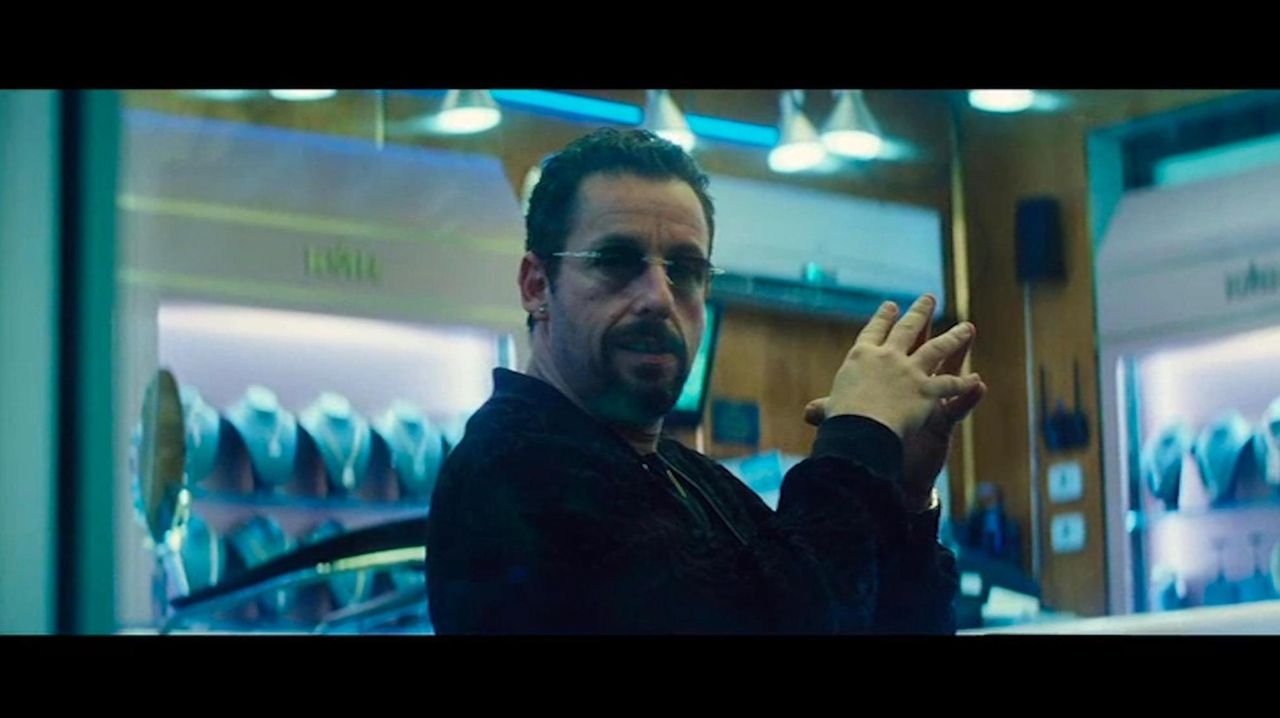 A charismatic jeweler (Adam Sandler) makes a high-stakes bet, but in this high-wire act, he must balance business, family and adversaries on all sides in pursuit of the ultimate win. Also starring Kevin Garnett, Julia Fox, Idina Menzel and Mike Francesa. Rated R. In theaters Dec. 25.

“Uncut Gems” is not a sports movie, in the traditional sense. But its star and co-directors are avid sports fans — very much including of the Knicks — and its tallest supporting actor is a Basketball Hall of Fame lock for 2020.

Also, gambling on games plays a big part in the plot of the caper film, which opened in New York on Friday and in wide release on Dec. 25 and has generated Oscar buzz for Adam Sandler in the lead role.

So yes, being a fan and/or superstar player aided the process.

“It helped a lot, yes,” Sandler said during a recent roundtable in Manhattan with a dozen sportswriters, most of whom cover basketball. (Upon eyeing the group, Sandler said, “[Expletive], I wish I was more up on my [expletive] basketball!”) 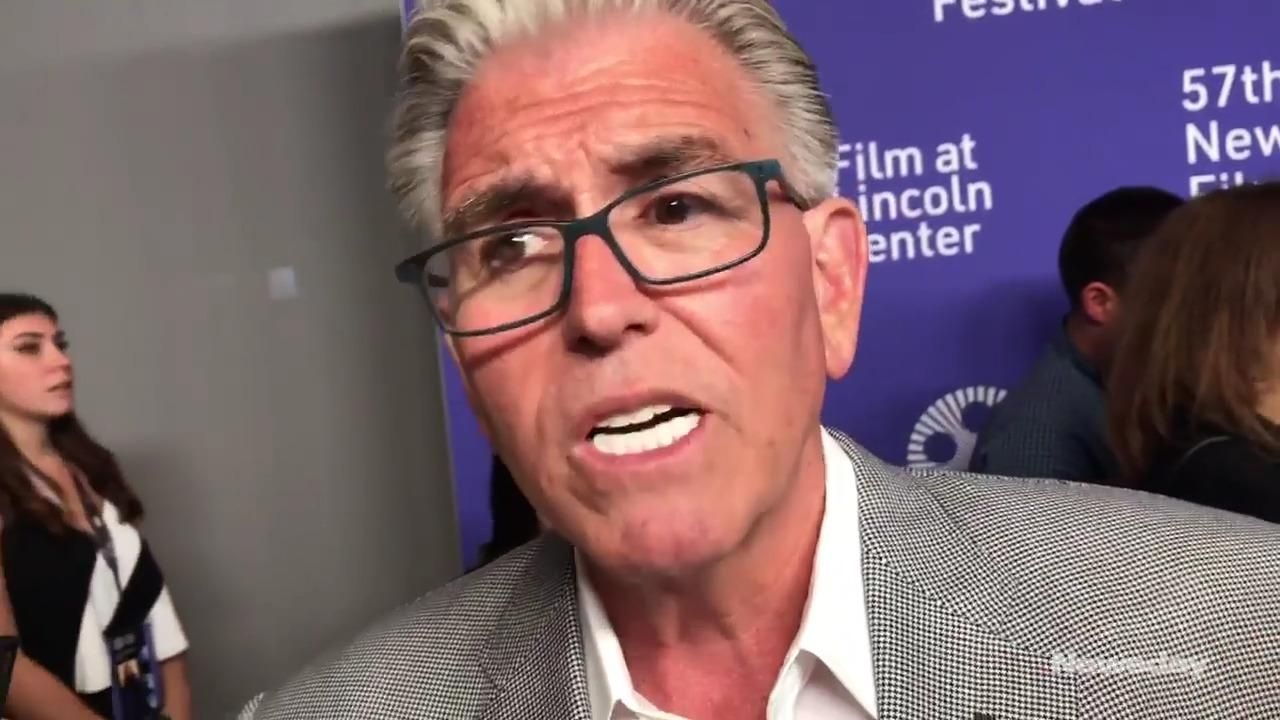 Mike Francesa at the 'Uncut Gems' movie premiere WFAN's Mike Francesa compares Wednesday night's "Uncut Gems" movie red carpet event in Manhattan with the ESPN "30 for 30" event he and Chris Russo did several years ago. Francesa has a role in "Uncut Gems," a Safdie brothers movie starring Adam Sandler as a New York City jeweler who makes a series of high-stakes bets. The movie, due out in December, also stars Julia Fox, Kevin Garnett, The Weeknd and Idina Menzel. Credit: Newsday / Neil Best

“Like the last scene, watching the game, I’m pretty passionate watching my teams, and I get a little loud and crazy,” he said. “That helped. I connected to that. It’s so funny; I like my teams so much. I used to bet a little bit back in the day, but then I realized that when I’m pulling for my team, it’s as though I have a big bet on the game.”

Sandler, 53, grew up primarily in New Hampshire but roots for the Yankees, Jets and Knicks. Why would a guy who was a teenager in New England in the early 1980s not have adopted the Celtics?

“I made a mistake,” he said. And not only in basketball. “Looking back at it, if I was a Pats fan, the last 10 years would have been nice for me.”

Sandler, who was wearing a 76ers “Trust the Process” hoodie during the interview, said he once met Larry Bird at a Pacers game and felt bad after Bird met his family.

“I had so much guilt about how much I screamed at him growing up,” Sandler said. “He was so nice to us, man, and he was big. I had no idea Bird was that big. He was Big Bird.”

Sandler was joined by his co-star, Kevin Garnett, and the co-directors, brothers Josh and Benny Safdie. The four seemed to have an easy camaraderie, joking loudly with one another and reporters.

Sandler’s fandom never was far from the production process. “Whenever the Yankees would lose, we’d be upset, like, ‘Sandler’s going to get mad,’  ” Josh Safdie said.

WFAN host Mike Francesa has a cameo in the film. He said that during his day on the set, he and Sandler watched a baseball playoff game together in a trailer.

Sandler said he first was exposed to it because of his late father’s penchant for golf wagers.

“He had a little side thing with me where whenever he’d say out loud to my mother what he bet, he’d always tell me: ‘Add a zero,’  ” Sandler said. “My father would get moody when the bets weren’t going his way.”

Further research led Sandler and his colleagues to people with serious betting problems.

“We had nights where I met a lot of guys who gambled and whose lives got ruined because of gambling, and got to know their stories,” he said.

Josh Safdie said one of his favorite scenes involves Sandler’s character’s son being impressed by the fact that his father made such a big bet that he tells his son “you don’t want to know” the amount.

“He likes the idea that his dad is willing to bet the house that he lives in,” Safdie said. “It’s exciting and cool to him. It’s heroic.”

The gambling plotline put Garnett in a potentially awkward spot, even though he is retired. The film uses footage from the 2012 NBA playoffs when he was playing for the Celtics.

“It’s perspective,” he said. “It’s no different from you go out in Boston and you’re at dinner and you get like three or four mob guys come up to the table congratulating you.”

On one hand, the instinct is to thank them. On the other, he said, you are “trying to get out of it as fast as you can.”

The Safdies originally cast Amar’e Stoudemire — complete with a shabbat dinner scene! — in the Garnett role in 2010 and later rewrote it for Kobe Bryant. He dropped out, and Joel Embiid briefly entered the picture.

But Embiid could not shoot during the season, and eventually they settled on Garnett to play himself.

“My instinct was, I hate Kevin Garnett,” Josh Safdie said. “It was the moment I realized my Knicks fandom — actually, it’s a sickness — eclipsed my film intelligence.

“I actually wasn’t able to realize that he is an incredible performer who goes out every night in front of 20,000 people and gets the audience to hate him.”

“I didn’t want to fail them,” Garnett said. “They took a risk on me being in there playing this part. I figure you had a list of people you could pull from this. At least you could come into this and be professional and be prepared.”

Glauber: Joe Judge enters Year 2 eager to improve
Judge: Giants a long way from worrying about expectations
Nate Solder returns to a whole new Giants team
DeGrom masterful again but leaves injured in Mets' win
Islanders eager for second crack at the Lightning
Mets' Scott is OK with 'sticky stuff' as long as rules are clear
Didn’t find what you were looking for?