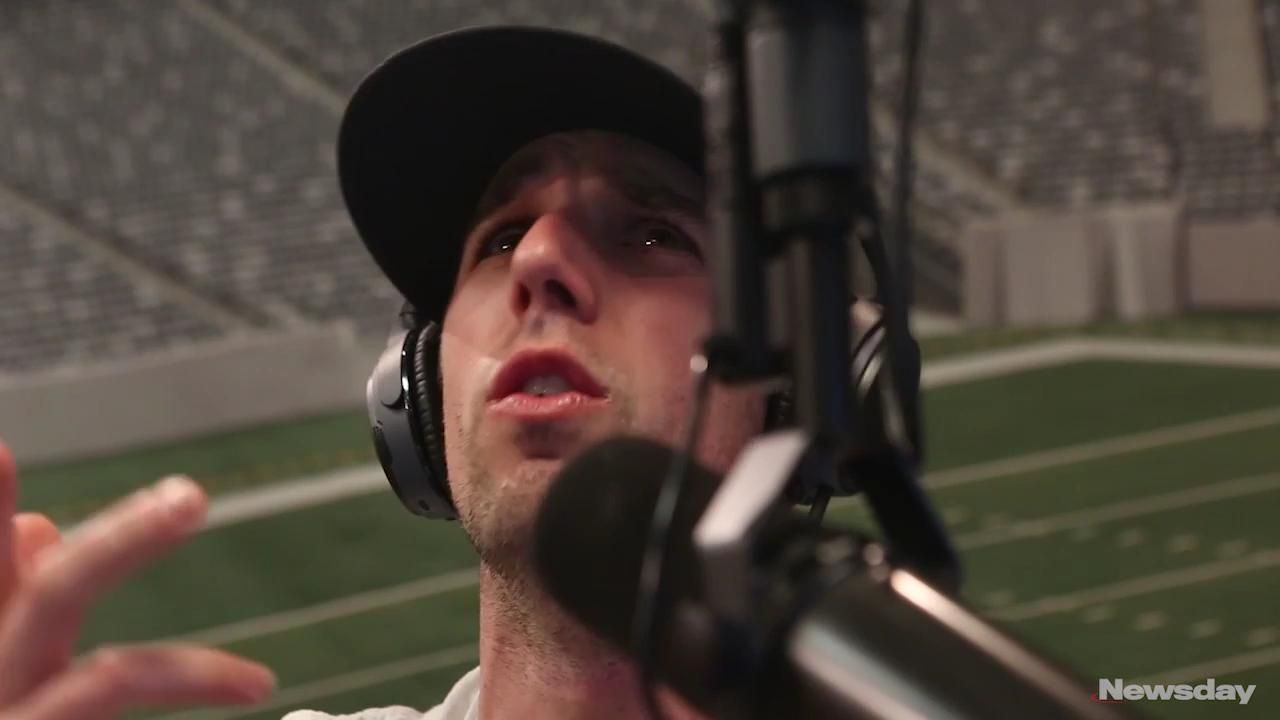 When most of you are sleeping through the night, they are working on air as WFAN overnight hosts. Sports talk radio hosts John Jastremski and Tony Paige discuss the unique lifestyle, the audience at those hours and their callers. Credit: Newsday / Mark La Monica

A light went on in an Astoria apartment at 12:20 a.m., where a man was getting dressed to go to work — nothing out of the ordinary in the city that doesn’t sleep.

But this man’s role was out of the ordinary, in that soon he would be behind a microphone talking to many of the other men and women around New York with similar shifts — plus assorted homebound night owls and insomniacs.

Fortunately the man in question, John Jastremski, has a natural energy that defies mere clocks.

He came bounding out of the apartment at 12:30 a.m., answered questions on the traffic-free, 25-minute drive to WFAN’s Soho studios — street parking was a breeze — and never flagged on-air from 2 to 5:40 a.m.

This was on a morning last month, a week after he had turned 30, working a graveyard shift that never seemed more alive.

“This is what I wanted to do, honestly,” Jastremski said, then named famous fellow Syracuse alumni he did not aspire to follow into play-by-play — Marv Albert, Mike Tirico, Ian Eagle — and instead rattled off his real sports media heroes: past and present WFAN hosts.

“I mean, I listened to them all, trust me,” he said. “I would watch a Yankee game as a kid, go upstairs and put the FAN on. Whoever was on would take me to sleep.

“So it is kind of surreal in a way that I’m paying it forward. To a new generation of listeners, I’m the guy that they’re falling asleep to — or keeping them up.”

In 2011, he won a contest that secured him a single shift a week on WFAN. He has seen his role grow to the point he and Tony Paige are the primary overnight hosts.

It is a fraternity that famously includes Steve Somers — who invented the role — and Joe Benigno. It brings unique challenges (lifestyle) and benefits (freedom).

“I never asked to work during the day,” said Paige, 64, whose 15 years in the wee hours are the most in WFAN history. “I like the overnights.”

One appeal of the shift is that with fewer breaks, there is more time to engage callers, most of whom are regulars.

“Then they get on a roll and you see their point. Now, sometimes it doesn’t make any sense, but a lot of times it does. I think it’s more laid-back.”

Speaking of laid-back, Paige’s personality is just that — the polar opposite of Jastremski’s — illustrating that there is more than one formula to get you through the night.

Mike Fliegelman, 26, the overnight producer, said, “I remember as a kid listening late at night to Tony. Tony’s always been there. He’s old reliable. When you turn on the radio at night, Tony Paige is going to be there.

“JJ is very different. His enthusiasm, his passion for sports, is infectious . . . Both are good in their own, separate ways. Most callers do call both and appreciate what they do separately. They know they have longer back-and-forth with Tony.”

Jastremski said he appreciates the freer rein the shift offers, but he tries to resist the temptation to allow callers to ramble.

“I try to approach my show like I’m on at 3 o’clock in the afternoon,” he said. “I’m not just going to leave a caller on for the hell of it because it’s 3:30 in the morning. I won’t. If they’re bad and not enhancing the show, in my opinion, then I am going to let them go.”

Happily, there is an ample supply of interesting — if quirky — callers at that hour.

“The overnight callers are all over the lot,” Paige said. “It’s like having a Thanksgiving party and there’s the aunt you always like to see and there’s the uncle that it’s, ‘Oh, God, he’s here again,’ but you welcome him in.”

Said Jastremski, “The city being as big as it is, there are people working at the airports early, people driving taxis, police officers, firefighters, guys driving trucks, guys just working all over the place. You would think, oh, you’re 1 to 6, 2 to 6, it’s easy to get through [with a call]. No!”

Paige said it would be interesting to get past and present overnight hosts together “to tell war stories” about callers. “I think it has something to do with the witching hour after midnight,” he said.

Sure, there are positives to the shift, but there is a central, unavoidable fact of lifestyle: It is out of sync with the vast majority of the rest of us. This requires strategy.

Jastremski and Paige try to go to bed soon after their shifts, then sleep until early afternoon. Jastremski usually drives to his home on Staten Island or his girlfriend’s home in Queens. Paige usually takes the train home to central New Jersey.

“I always used to consider myself before this show kind of a morning person,” Jastremski said. “Now I’m used to it. It’s more of an adjustment for me when I try to break the overnight and do a normal day for a day or two.”

Paige first learned the overnight ropes working as a security guard at a post office. “I figured this must be what I am supposed to be,” he said.

The lifestyle worked well for him in the early years, when his wife was working full time and he was able to care for his now-grown son during the day and coach him in sports in the afternoon.

Still, he said, “It gets to you some days. Some days you come in here and you’re full of energy and the music starts and you start yawning and are like, ‘Oh, God, it’s going to be a long day.’ Some days you don’t feel like it but then something happens in sports and you keep going all night.”

Harris Allen, the overnight update man since 2006, has a different approach to sleep. After his shift, he tries to go about his morning like “normal people,” goes to bed in early afternoon, wakes up in early evening and goes to work.

So that’s what works for him?

“No, it doesn’t work,” he said. “Nothing works. Nothing works on this shift. That’s just the reality.”

One decision overnighters must make is how and when to eat. Jastremski likes to have breakfast food when he wakes up, even though it is early afternoon. Paige has breakfast when he gets home from work, before he goes to bed.

Jastremski said caffeine timing is crucial. He drinks tea before and early in his shift — but never late in it. “If I have a cup of coffee at 4:30, I’m off the wall,” he said.

Mark Chernoff, WFAN’s vice president of programming, said overnight hosts should be knowledgeable and friendly, with “a real gift of gab, as conversations with overnight callers can last longer than the daytime calls. You also have to really love being a night owl to be successful on the shift.”

He might be taking applications in the near future.

Paige, who missed a month of work recently after having a cancerous tumor on a kidney removed, said he probably will stay only another year or so then pursue other interests, such as teaching.

Paige brings a wide array of experiences — sports and otherwise — to the job. He also is African-American at a place that has had few such hosts over the decades.

“I always thought hopefully there’s some black kid, or black woman, listening that maybe they might want to try this,” he said. “It’s not going to be easy, but I’d like to see more black people, women, everybody get involved.” (WFAN added Bart Scott, who is black, and Maggie Gray to its host lineup in January.)

Jastremski could be a candidate for a more conventional shift in the coming years. He sat in for an hour with Mike Francesa one recent afternoon.

For now, though, both will continue to schmooze while most of us snooze.

“I love it, I really do,” Jastremski said. “For me to come in at 2 in the morning, 3 in the morning, get a chance to do this, it’s incredible, no matter the time. Incredible.”

Tony Paige on retiring: 'Time to do something else'

After first working at WFAN in 1995, he has been at the station continuously since 2003 as an overnight host.

Somers pioneered overnight sports talk radio WFAN was the first 24-hour sports talk radio station, which naturally meant that it had ... Life as an overnight host on WFANWhen most of you are sleeping through the night, they are working on air as ...