Wantagh's Al Iaquinta, in the blue shorts, went the distance and lost a unanimous decision to Khabib Nurmagomedov in the main event at UFC 223 at the Barclays Center in Brooklyn on April 7, 2018. Credit: Mario Gonzalez

Most times when an MMA fighter gets shut out, including a few 10-8 rounds, there is little praise. But it was different this time on Saturday night.

Wantagh’s Al Iaquinta had ascended to the main event after a series of events almost too confusing and unbelievable to list. His reward? Khabib Nurmagomedov, considered among the best in the entire sport, in a lightweight title fight.

And as Iaquinta stood in the center of the octagon inside the Barclays Center in Brooklyn, his body beaten and his face swollen after going the distance, his stock perhaps never has been higher.

“Everybody was blown away by what he did,” trainer Ray Longo said. “And they weren’t just saying that, they were emotional.” 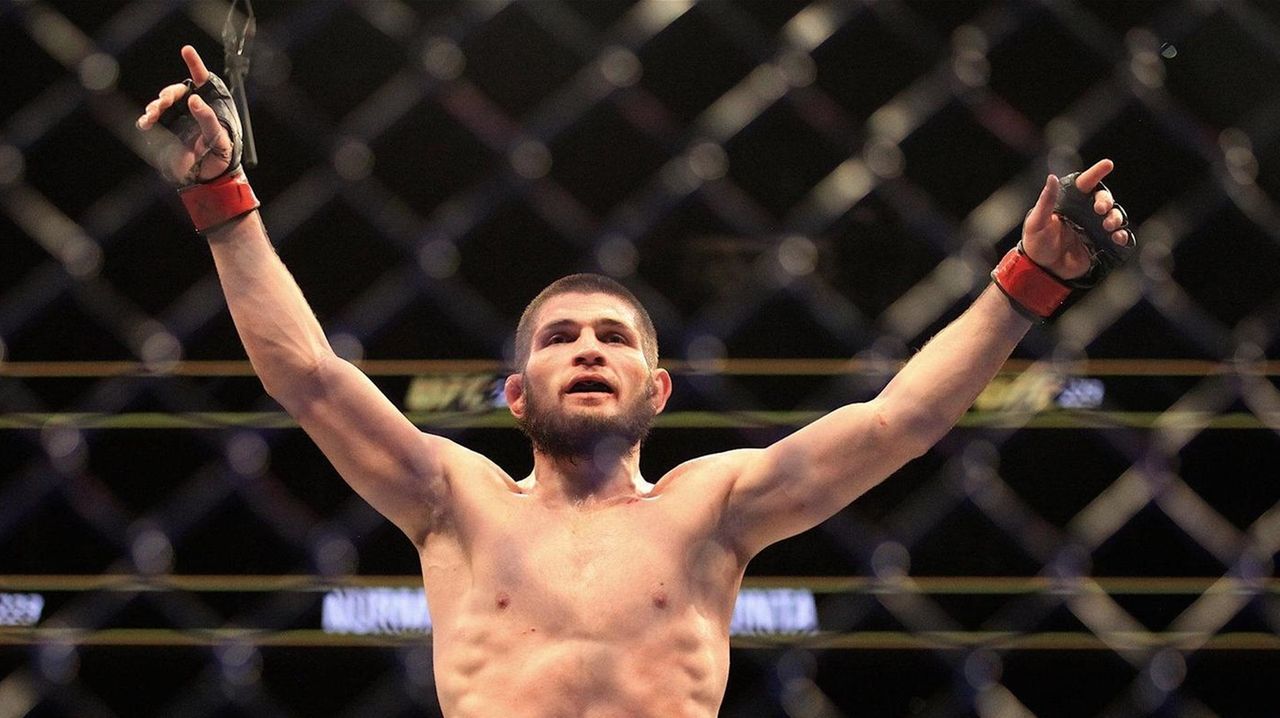 “Much respect to Al, too,” UFC president Dana White said early Sunday morning after the fight. “He didn’t show up just for a paycheck, he came to win.”

Iaquinta took the five-round fight on one day’s notice when he originally was scheduled to face Paul Felder in a three-round bout. Nurmagomedov is undefeated (26-0) and carries a world-beater persona with him. He defeated Iaquinta, 50-44, 50-43, 50-43.

Iaquinta, like he said he would beforehand, fought like he had nothing to lose. Despite being dominated for much of the fight, he never stopped. He never quit. He defended takedowns and submission attempts. He took jab after jab to the face. “Raging” Al never wavered.

In the opening two rounds, Nurmagomedov controlled Iaquinta with his wrestling. Each time Iaquinta was able to get back to his feet, it was with Nurmagomedov clinging to him like a koala on a tree.

“I just wish I had more time to prepare,” Iaquinta told Newsday on Sunday. “I think it would be a totally different fight. I did the best with what I was given to work with. I guess that’s what I’m happy about.”

Nurmagomedov talked to Iaquinta throughout the fight, as he often does with his opponents.

“If you can speak with opponent, play with his mind, if this work, why not?” Nurmagomedov said. “With Iaquinta, it’s not working. He keep going.”

Heading into the fifth round, Iaquinta (13-4-1) had one chance to pull off the monumental upset. Time to harness whatever energy he had left.

“Whatever Ray said, I took it to heart,” Iaquinta said. “I could tell from the tone of his voice, I had to do something big. I didn’t want to have that ‘What if I did more?’ I went a little too hard in the beginning, but I had to.”

Iaquinta was outstruck for the fight, 172-43. He stopped nine of 15 takedown attempts. Before Saturday night, Iaquinta had fought once in the past three years, and that bout, a victory, lasted 98 seconds.

“Although we lost,” Longo said, “I’ve never been this positive after a loss and this proud of a performance. He had his moments. He showed the heart and the qualities in a fighter that can’t be taught.”

Ratings lead for WFAN's 'Carton & Roberts' grows in April report
Sources: Conforto, McNeil headed to 10-day IL
'No voice more closely associated with NBA basketball than Marv Albert's'
LI's Palmieri scores OT winner as Isles beat Penguins in Game 1
Trotz's decision to start Sorokin turns out to be the right call
Ohlmiller's record day has SBU a win away from Final Four
Didn’t find what you were looking for?