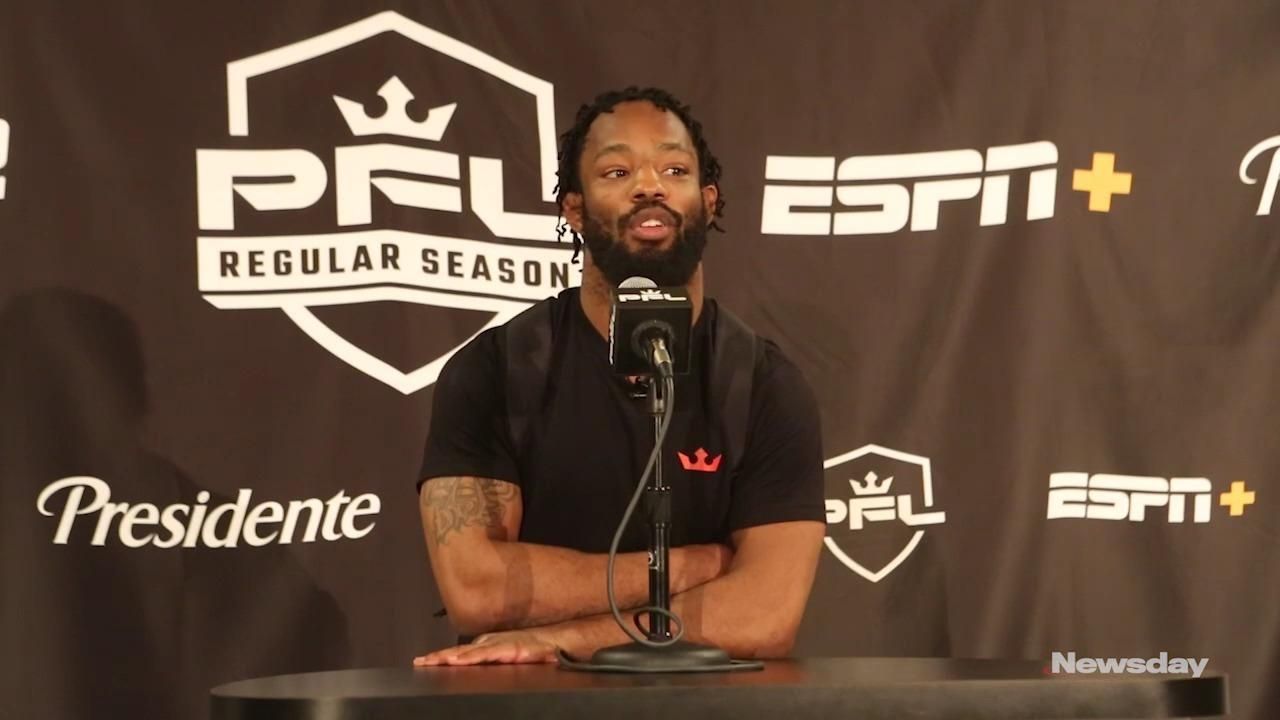 When a fighter suffers his first career loss after years of knowing nothing but winning, the question he faces often changes from one of handling the weight of carrying that zero around to one of wondering how he will respond to that adversity in his next bout.

Harrison, from Freeport, controlled the featherweight bout from beginning to end to win a unanimous decision against Peter Petties at PFL 2 at NYCB Live’s Nassau Coliseum. The judges scored it 30-27, 30-27, 30-27. Harrison earned three points in the featherweight standings for his victory.

"Overall, I think I could have been more active in certain areas," Harrison said after the fight. "But, you can say anything from the outside looking in. When you’re in there, things are a little different. I did what I needed to do to make sure I secured the win."

Harrison landed 42 of his 58 strikes compared with 5 of 22 for Petties. But it was on the ground where Harrison (21-1) really dictated the fight. He landed a takedown in each of the three rounds and was able to prevent Petties (8-5, 1 no contest) from getting back to his feet.

Petties did a good job preventing Harrison from doing much significant damage from top position and side controls. But Harrison did connect on 24 of his 31 ground strikes, a good portion of which were knees to Petties’ rib area.

“While we were down there and hand fighting and stuff, there were a couple of times where I couldn’t get my wrist back. He grabbed from awkward angles," Harrison said. “If you look in that first round, for example, there was a moment where I was trying to jerk my hand out and I couldn’t get it away. It’s not like i just wanted to lay there. If you’re on top of somebody with good position, you want to hit him. I don’t want to be out there for 15 minutes. I'd rather get him out as early as possible."

Harrison, 31, had two submission attempts in the final 15 seconds of the fight, starting with a rear naked choke and then moving to a guillotine choke. But the final bell sounded before Harrison could really sink in the choke long enough to come close to a submission and a bonus point in the standings for a third-round finish.

"You saw how deep it was, huh? That's going to be on my mind this whole time," Harrison said. "I don't know if he turned the wrong way or if he just turned kinda halfway and just stopped. It just slipped right under and I was like, 'wooo' and I went to go get it, but by that time he had already went back down to the mat and it was over."

Harrison said he heard the 10-second warning and knew time was short.

"I was like, all right, let me just try and throw this guillotine on, but he jumped right over," Harrison said, "and I was like, 'Uh oh. Good thing there's probably like six seconds left because I can hold him here."

PFL president Ray Sefo was critical of referee Steve Drita for not standing the fighters up at several points in the fight after the grappling had led to a stalemate with little striking or attempts to advance position.

"I thought the referee did a horrible job," Sefo said. "I felt like that fight should have been at least stood up to restart because I felt like both of them were just laying around doing nothing. It wasn't them. The referee is the one who controls the fight."

This was the second time in his career Harrison fought at the Coliseum in front of family, friends and acquaintances who watched him grow up. That brings the burden of added pressure, Harrison said, but it does come with a few perks.

“In times when you need to man up or muscle up and do what you need to do, it definitely does help as well," Harrison said.

Harrison, who trains at Bellmore Kickboxing MMA, was a semifinalist in PFL's inaugural season last year. He lost by unanimous decision to Lance Palmer, the eventual champion and winner of the $1 million prize the PFL awards to the champion of each weight division.

Harrison said he comes into Season 2 as a motivated fighter.  "Last year didn't end the way I wanted it to end," Harrison said, "so this year, I have to do everything I can to make sure it ends how I feel it should end."

That ending looks like this: Harrison with his hand raised on New Year's Eve at Madison Square Garden's Hulu Theater with a championship belt and a $1 million paycheck.