Hugh McKenna trains at  Long Island MMA in Farmingdale on June 13, 2017, ahead of his Bellator debut at Madison Square Garden on June 24. Credit: Marcus Villagran

A mixed martial artist’s words often have as much impact on their career path as how they perform on fight night.

That’s fine for established veterans looking for big checks, but it can present a problem for up-and-comers such as Hugh McKenna. The Long Island native just started his professional career, but already he’s wary of the course the MMA industry has been taking for some time.

“The sport’s kind of running away from martial arts, the martial arts are kind of dying out” McKenna said. “I would love to start a change in the other direction.” 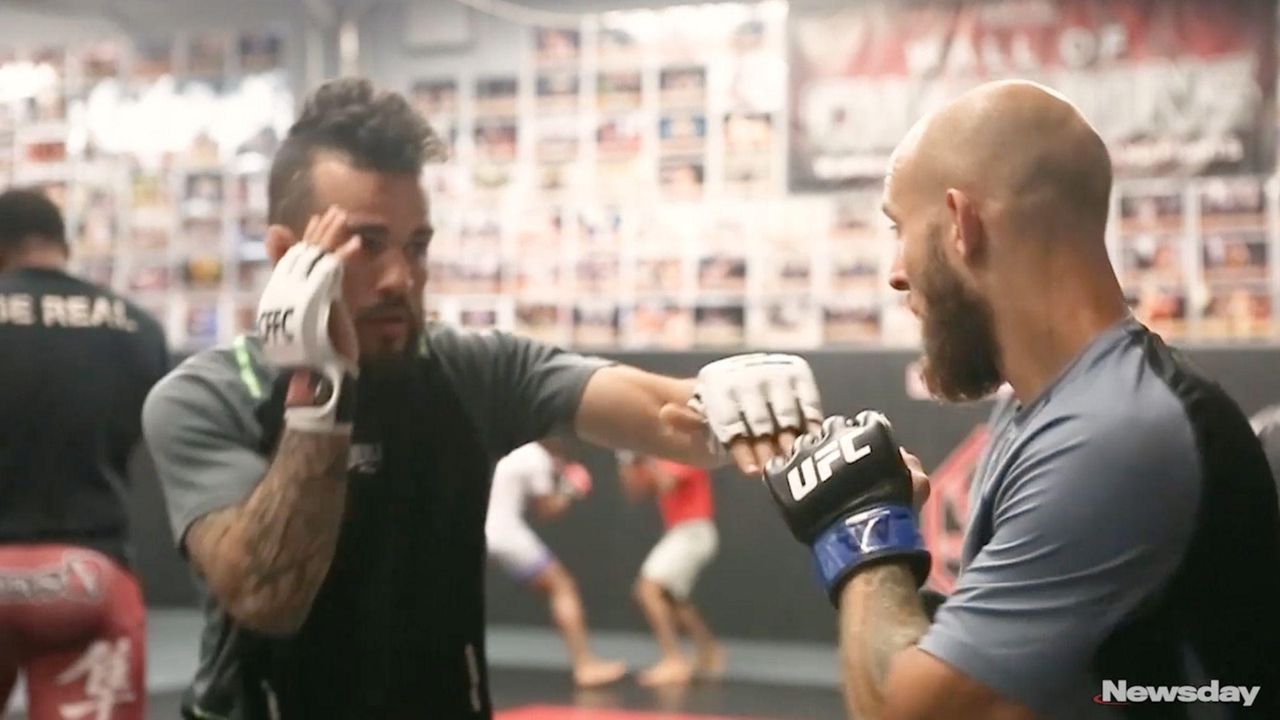 McKenna, who grew up in Shoreham, returns to the cage at Bellator NYC on Saturday at Madison Square Garden. He’ll face NYC’s John Salgado in a 168-pound catchweight bout during the prelims. It will stream on Bellator.com beginning at 6 p.m.

It will be a good chance for fans to meet McKenna, who has been training at Long Island MMA in Farmingdale for six years but has just one professional fight under his belt.

“This guy is the best-kept secret in MMA,” said Ryan LaFlare, UFC welterweight and McKenna’s training partner. “I tell people that all the time. And it stinks because then when he goes and fights there’s so much pressure because I’m like, ‘this guy can beat me,’ and he wasn’t even a pro.”

McKenna won his final amateur fight three years ago but didn’t turn pro until February of this year following a series of injuries and bout cancellations.

He lost his first pro fight via unanimous decision to Wendell Sneed in Ring of Combat but was happy to get his career started at last.

“It just felt good to be back in there and to actually finally have it happen,” McKenna said. “It was just so frustrating constantly false-starting.”

Still, McKenna’s relative anonymity isn’t helped by his disdain for the style of self-promotion many fighters embrace. Plenty of up-and-comers use their social media platforms to give a glimpse into their lives, tweet trash and promote sponsors. But McKenna doesn’t have a Twitter profile, and his public Instagram has just a few hundred followers. That’s fine by the soft-spoken welterweight, but he said seeing popularity rewarded over skill can be discouraging.

“It seems like they’re making it more and more corporate, more like your stereotypical 9-to-5,” McKenna said. “You need a much higher business acumen and social media marketing intelligence in order to get what you used to earn with martial arts.”

And being a social media expert isn’t why he got into the sport.

“I wanted to do something that I’m passionate about, that I love,” McKenna said. “I don’t want to sit on my phone and take videos and selfies and count how many likes I have, and I don’t want to pay a manager to do that either.”

A lifelong wrestler, McKenna picked up Brazilian jiu-jitsu while in college and was hooked, abandoning plans to apply for medical school and instead picking up a life of fighting. That didn’t go over well with his parents, leading him to move in with his girlfriend in Astoria, where he currently resides. He works part-time as a jiu-jitsu and MMA instructor and personal trainer.

McKenna said he has the drive to be a world champion one day but wants his work in the cage to be the reason he gains a following.

“I’m just going to fight and try and get better and better until I’m at a level where I can’t be ignored.”

He’ll have a good chance to grab some attention when he hits the floor at the Garden. McKenna signed a one-fight deal with Bellator, widely considered the sport’s second largest promotion, but hopes he can earn something long-term with a strong performance in the cage.

While the constant noise can be frustrating for a guy such as McKenna, who cites the tranquil UFC contender Demian Maia as an idol, it won’t keep him away from MMA.

“I would like to say that I wouldn’t continue, but I know I can’t walk away. I also think it’s be cowardly to quit because of that,” McKenna said. “I’ll do it until it kills me, even if it kills me.”

Da Silva set to live out childhood dream at Bellator NYCSergio Da Silva had all but conceded he'd never get to compete at the highest ... Boxer Hardy takes swing at MMA in Bellator NYCMoney.That's one of the more talked-about reasons Brooklynite Heather Hardy, a two-division champion boxer with ... Bellator NYC: Davis, Bader expect better rematchRyan Bader came to Bellator looking for respect.He's not going to get much of that ...

Rangers again squander two-goal lead, fall to Wild
Isles' game vs. Kraken postponed by winter storm
Lundqvist: 'It's all about what happened, not so much what didn't happen'
All hail Henrik! Rangers retire goalie great's number
Daboll figures to be vastly better than Judge
Rangers defenseman Adam Fox goes on IR
Didn’t find what you were looking for?