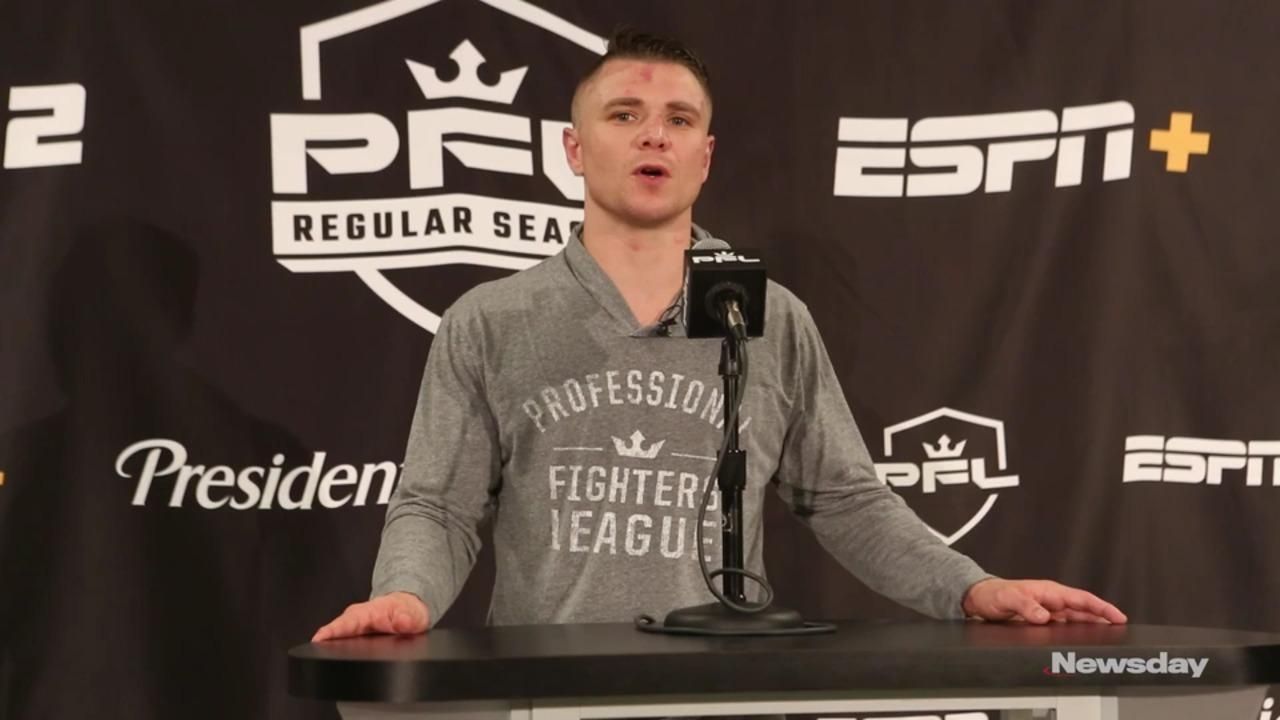 Islip's Chris Wade defeated Nate Andrews via unanimous decision in a lightweight bout at PFL 2 at NYCB Live's Nassau Coliseum on May 23, 2019. Wade, who trains at Long Island MMA in Farmingdale, talks about the fight and how the hometown crowd willed him to victory. (Fight footage courtesy of PFL Media) Credit: Newsday / Mark La Monica

Chris Wade had his Thursday all scheduled ahead of his first fight of the PFL season.

“Sleep in my own bed, come to my gym, train with my partners. I drive to my fight, park my car, beat somebody up, drive home.”

Competing at NYCB Live’s Nassau Coliseum for the third time in his professional career, Wade once again embraced fighting at home, taking a decision victory over Nate Andrews, 30-27, 29-28, 29-28.

In a bout with plenty of grueling grappling exchanges, Wade avoided Andrews’ flashy striking and slick submission attempts to earn the praise of the Long Island crowd, moving to 3-0 in fights on Long Island between the UFC and PFL.

"Even before the fight, I'm looking left and right and everywhere I look, I know somebody and they're making eye contact with me, starting to get crazy and it's amping me up," Wade said. "I really think that on a night like tonight where I didn't feel like I had necessarily everything that I have on one of my best nights, they kind of willed me through what was a really tough fight."

The victory gives Islip's Wade three points in the PFL’s lightweight standings, good for a four-way tie for second place after the division’s first regular-season event of the season.

“I thought it would be really easy for me to take him down on the cage with trips and throws,” Wade said. “I wound up spending a lot energy failing. I had to go back to my leg attacks, which I wanted to stay away from because he’s so good at chokes.”

Wade (15-5) came across the cage quickly with a pair of sidekicks, working as the aggressor and controlling the cage early in the fight. After a minute of action, Wade pushed Andrews (15-2) into the cage looking for a throw, but Andrews wouldn’t go to the ground, leading the pair to trade punches against the cage for much of the round.

“Some of the cage grappling can take the wind out of your sails,” Wade said. “When it’s not working we need to do less of that and get back on the feet and starting.”

In the second round, Andrews was able to open up his striking, but Wade patiently looked for his shot and fired when the opening presented itself, securing the takedown while avoiding a guillotine attempt on the way down. Andrews looked for more submissions from the bottom, but Wade advanced toward Andrews’ back, opting to go for a choke of his own. When Wade let go, Andrews rose to his feet, but Wade refused to disengage. Soon enough, Andrews wound up securing a takedown and going for another choke, but Wade flawlessly escaped to the roars of the Coliseum crowd.

"Just having that energy in the building, knowing my family's here and my friends are here — I can't let them down," Wade said. "That made me think, 'I'm not quitting, I'm winning this fight, 100 percent.' So [the crowd] was probably a difference maker."

Andrews looked to be comfortable in the third as he worked his strikes early, but another Wade takedown disrupted his rhythm and the fight found its way back to the ground. An Andrews arm-lock attempt ended when Wade took his opponent’s back, looking for a rear-naked choke. His first attempt was too high on Andrews’ chin. The next time, he found his arm on Andrews’ chin, squeezing with full power to force a submisision, but couldn’t get the arm directly around the neck and Andrews sneaked free. Wade was back on top after the escape, but Andrews eventually found his way to Wade’s back in the closing minute of the round.

As time ran down, Wade covered while Andrews threw everything he could, but the horn sounded and Wade was soon on his way out of the cage, and if all goes to plan later, to his car for a satisfying drive home.

Rangers again squander two-goal lead, fall to Wild
Isles' game vs. Kraken postponed by winter storm
Lundqvist: 'It's all about what happened, not so much what didn't happen'
All hail Henrik! Rangers retire goalie great's number
Daboll figures to be vastly better than Judge
Rangers defenseman Adam Fox goes on IR
Didn’t find what you were looking for?