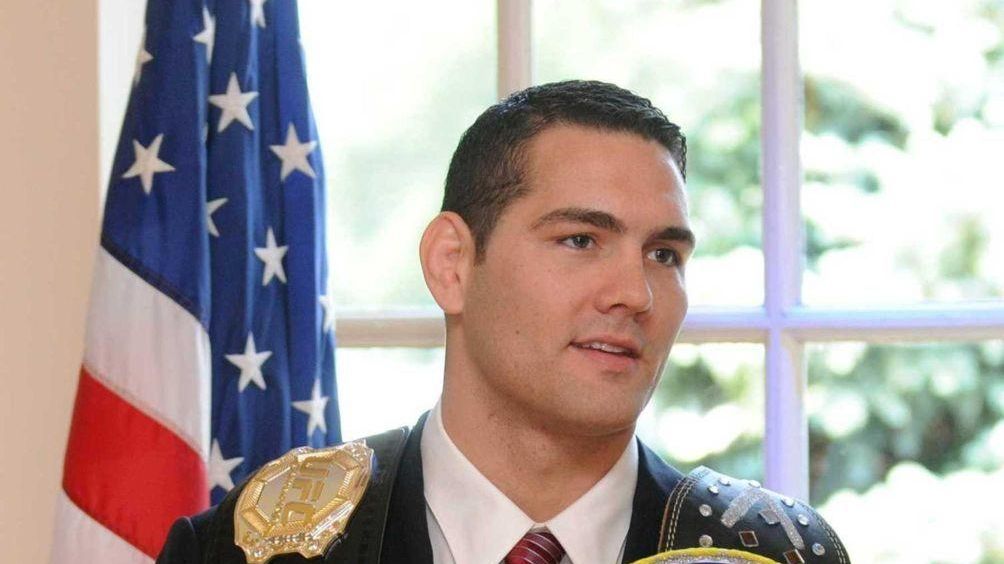 There have been public appearances and private plane rides, but never this.

Chris Weidman finally got time to himself. An entire day, actually, as Nassau County proclaimed Wednesday to be "Chris Weidman Day" in honor of the Baldwin native's victory over Anderson Silva 11 days earlier at UFC 162 to win the middleweight title.

"You got Veterans Day, Memorial Day and you got Chris Weidman Day. You can't beat that," Weidman said to the 200 or so people in Baldwin at the Coral House catering hall. "My wife hates it, I think. She makes me do things on my day like watch the kids in the morning."

The proclamation was presented by Nassau County Executive Ed Mangano, who was joined by Senate co-leader Dean Skelos (R-Rockville Centre) and Town of Hempstead Supervisor Kate Murray. Family, friends and coaches also celebrated Weidman and that left hook that knocked out Silva, the greatest MMA fighter ever, for the first time in his 38-fight career. "It shows he's focused, and it shows that coming from Long Island, we're not wimps," Skelos said. "We're strong, we're focused and we're champs."

The event was hosted at and funded by Coral House. "His first award ever was in this room," Coral House owner Butch Yamali said. "How can you not honor him here?"

Weidman, 29, grew up in Baldwin, played in hockey and basketball youth leagues in town and won a state wrestling title at Baldwin High School. He was also a two-time All-American wrestler at both Nassau CC and Hofstra before ever walking into Matt Serra's Brazilian Jiu-Jitsu academy in East Meadow and Ray Longo's MMA gym in Garden City.

Wednesday afternoon was brought about by Weidman's accomplishments in the cage, but Murray chose to focus on something else -- his actions in the aftermath of superstorm Sandy. The first floor of Weidman's home in Baldwin was completely flooded and his family displaced. Still, he and his wife organized a clothing drive at St. Peter's Church for those in greater need.

For that, Murray presented Weidman with a ceremonial Town of Hempstead championship belt for his "greatness as a human." "There was not one second I felt bad for myself," Weidman said.

"You had so many neighbors you looked at and felt bad for them. There were people in a lot worse position than I was. Older people, no flood insurance."

Weidman (10-0, 6-0 UFC) can be celebrated in his hometown for the fighting skills displayed elsewhere. He just can't display those skills in his hometown, county or state still. New York remains the only place in North America with a ban on professional MMA.

"We're the only state that doesn't allow it," Skelos said. "We're hopeful next year we'll get it done."

Rangers rally with five unanswered goals to beat Maple Leafs
Aldridge steps up in final minutes as Nets hold off Wizards
Stony Brook men and women post basketball wins
Champagnie's 17 not enough as St. John's falls to Creighton
It's a whole new ballgame when it comes to getting into Hall
Giants want to interview Cowboys DC Quinn for head coach job
Didn’t find what you were looking for?