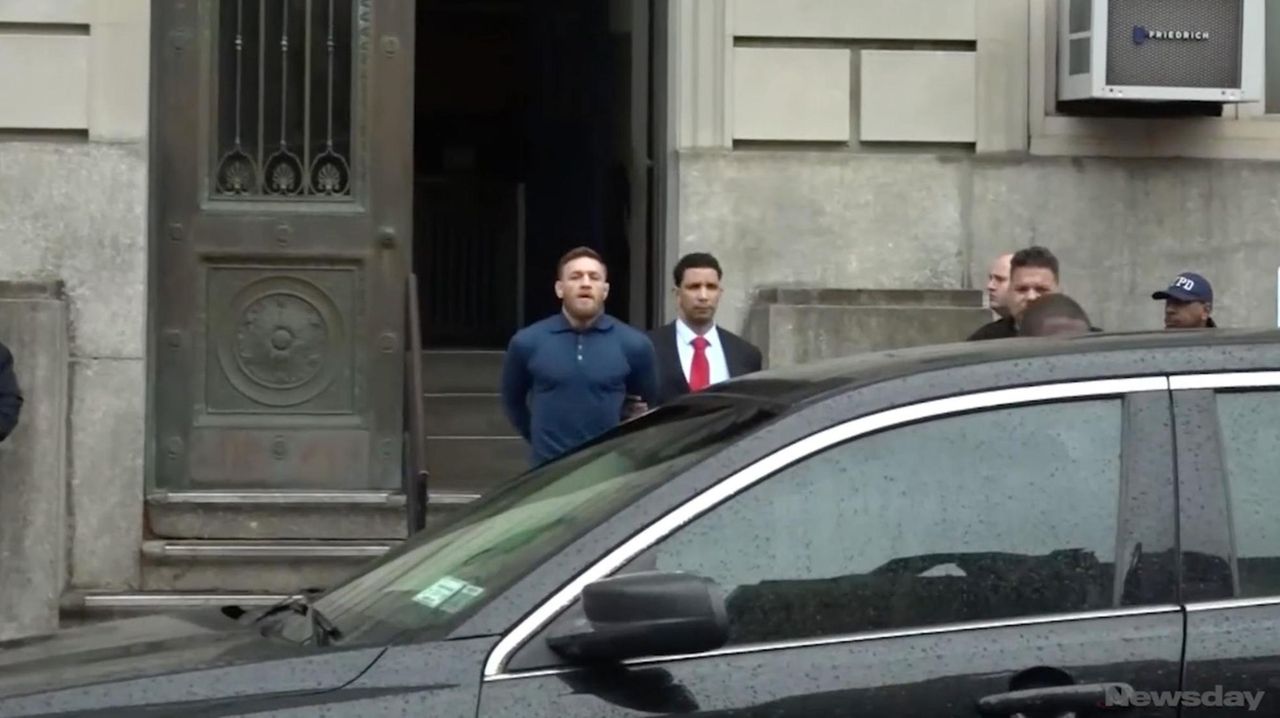 UFC fighter Conor McGregor was released from police custody Friday after posting $50,000 bond at Brooklyn Criminal Court. McGregor, 29, was charged with one count of felony criminal mischief and three counts of assault after being involved in a melee at Barclays Center shortly after UFC 223 media day Thursday, police said.

Cian Cowley, a 25-year-old fighter who trains with McGregor, also was charged with one count of assault and one count of criminal mischief for his alleged role in the incident, police said. He was released on $25,000 bond.

Kings County Judge Consuelo Mallafre-Melendez issued orders of protection against both McGregor and Cowley in favor of multiple individuals involved in the incident, including UFC fighters Michael Chiesa and Ray Borg, both of whom were injured Thursday. Chiesa and Borg were treated at Brooklyn Methodist Hospital and later released, according to the UFC. Both fighters were forced to cancel their bouts scheduled for Saturday night.

McGregor and Cowley are scheduled to appear in court again on June 14.

“[McGregor] was just very thankful that he was out,” said Ira Judelson, bondsman for both McGregor and Cowley. “He just wanted to get out of there.”

Judelson said McGregor and Cowley were not forced to surrender their passports and are free to return to their native Ireland. Judelson said he was unsure if they’d be leaving the area any time soon.

Police said Thursday’s dispute was over a vacated title.

At a news conference following the UFC 223 weigh-ins Friday, UFC president Dana White wouldn’t commit to McGregor fighting in the near future.

“This thing’s so crazy,” White said. “He’s dealing with what he has to deal with. We’re dealing with this fight, next week we’re going to go home and figure out how this whole thing plays out. It’s a very unique situation that we’re in. It’s never happened in almost 20 years of doing this.”

The bus contained numerous fighters who were scheduled to appear on Saturday night’s UFC 223 card. McGregor’s actions caused three bouts on Saturday’s card to be canceled.

Chiesa suffered cuts to his face and was forced to cancel his lightweight bout Saturday with Anthony Pettis. Borg’s flyweight bout also was canceled because he suffered multiple corneal abrasions, the UFC said.

The third canceled bout involved McGregor’s friend and teammate Artem Lobov, who was scheduled to fight Alex Caceres. Lobov was shown on video two days ago getting into a verbal altercation with Nurmagomedov.

McGregor, from Dublin, Ireland, is one of the biggest pay-per-view draws in UFC history, having been the headliner on four of the largest grossing events in the company’s history. He is the only fighter to hold championship belts in two different weight divisions at the same time.

McGregor has not fought in the UFC since November 2016 when he won the lightweight title from Eddie Alvarez at Madison Square Garden. In 2017, he boxed Floyd Mayweather Jr. and lost by TKO in the 10th round.