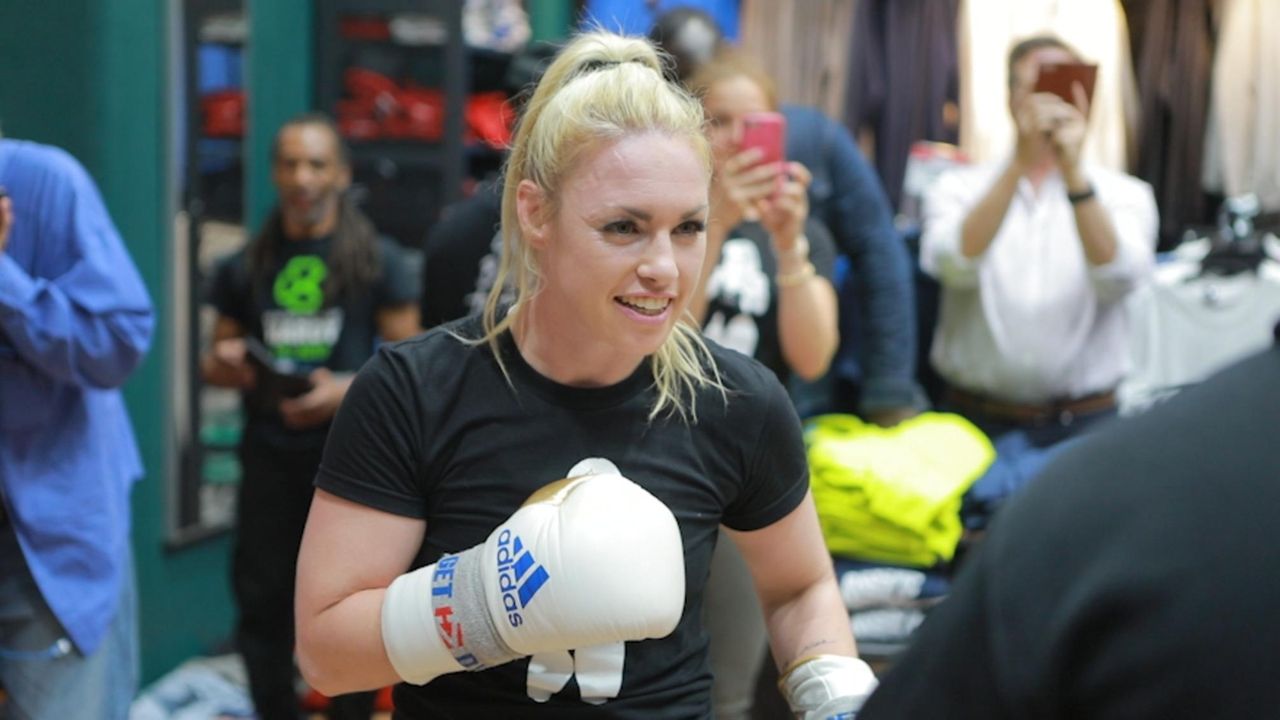 On Wednesday, Oct. 4, 2017, Heather "The Heat" Hardy held an open workout at Modell's in Times Square in advance of her fight against Kristina Williams at Bellator 185 on Oct. 20 in a flyweight bout at Mohegan Sun Arena in Uncasville, Conn. Credit: Newsday / Raychel Brightman

“Still the case,” Hardy said. “I’ve spent almost every day learning something new, working on new tricks in the gym. I can’t wait to do it again.”

Brooklyn’s Hardy is ready for her second turn in the cage, keeping her boxing career on hold to face Kristina Williams in a flyweight bout at Bellator 185 on Friday at Mohegan Sun in Connecticut. She’s been clawing to get back in action since she won via TKO late in the final round, saying MMA taught her things about herself boxing couldn’t.

“I think that it gives you a different sense of how deep you can dig,” Hardy said. “Like I was there and my face was cut open, I was in a sport I never tried before at 35 years old and I was winning, man. That really tells you something about yourself and how much more I can possibly grow from here.”

Hardy struggled in that opening round against Alice Yauger before getting her rhythm. She turned it on in the final minute and ended the fight with just 13 seconds left, using her boxing to make a statement with the finish.

“I wasn’t happy with the first round and I don’t even want to see it, I want to forget that forever,” Hardy said. “There’s always room for improvement, right? If I had to grade that performance, the way it ended was like an A+ but the overall . . . it took me too long to adjust to distance and timing, which I’m so thankful I’ve finally picked up on. Even now just kickboxing and doing my jiu-jitsu, where I have to be as far as space and time has changed, and my speed. Everything has improved and gotten better.”

With lessons learned, Hardy is confident she belongs in her new sport and can be successful at the highest levels.

“I think after my first fight, I proved I belong here,” Hardy said. “Everybody says it’s not about how good you look against one person, it’s about what you do in the fight. I showed everybody I’m ready to fight.”

Hardy has embraced the non-boxing elements of the sport, training with Daniel Gracie at Renzo Gracie Academy in Manhattan. She continues to work with her boxing coach Devon Cormack, a former kickboxing world champion.

“I love kicking. Today I was sparring up at Renzo’s in Manhattan and a bunch of the guys only know me as a boxer, and they were like, ‘Who taught you how to kick like that?’” Hardy said. “We went through my boxing career, but we always had kicks in the back pocket.”

Hardy’s learning all the elements of MMA, but she’s also learning the differences in how her two sports are promoted, especially for women fighters.

“This was a totally different experience,” Hardy said of promoting her MMA fight vs. her boxing career. “It’s no secret that women’s boxing is really underappreciated. I worked really hard in my boxing career, and unfortunately for female boxers, although now we’re seeing kind of a turn in things where you see a few females here and there shown on Showtime and ESPN, it’s still a drop in the bucket compared to how many of us there are.”

Hardy said fighting for Bellator had a significant advantage over boxing — television.

“Spike put me on the broadcast for my debut. I was only televised once in 20 fights and it was a tape-delay on a separate TV channel from the main event, a totally different time frame, and for that fight I wasn’t compensated for it,” Hardy said. “When you’re not on TV, you don’t get sponsorship opportunities, so I didn’t have a chance to get sponsors. And because I’m not on TV, the promotors don’t want to promote you. So there was no, ‘Make sure you catch Heather Hardy.’ I was just the first person up to fight opening up these shows, selling thousands of dollars in tickets, but it was like I wasn’t even there.”

Hardy said she plans to be back in the ring next January at Barclays Center and hopes to bring some of her newfound attention with her.

“That was my goal from Day One, right, to show the producers,” Hardy said. “One of the questions asked to me in the press conference was, ‘Are you going to encourage more female fighters to come over and cross to MMA?’ And I was like, ‘No, this message isn’t for female fighters, this message is for the network executives who don’t want to pay us. Look at that show I just put on.’ And I could have done this 20 times if you gave me the stage for boxing.”