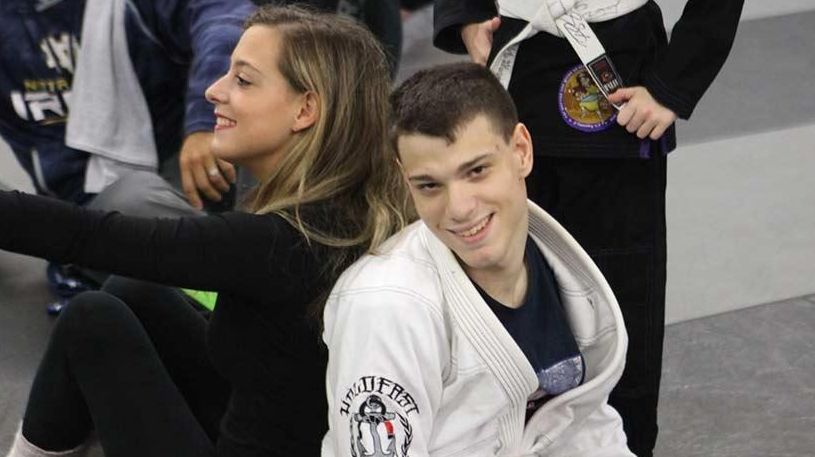 For nearly 21 years, Ian Matuszak fought. He was born with cerebral palsy and died after a battle with esophageal cancer. Along the way, Matuszak, from Westbury earned his blue belt in Brazilian Jiu-Jitsu and touched the lives of thousands of people he came across. (Newsday/Chris Ware, Mark La Monica, Jeffrey Basinger)

Ian Matuszak spent every day of his life fighting.

That life that began weeks earlier than expected in 1995 when he, his brother Alec and sister Sydney were born.

He fought in hospitals, in wheelchairs and walkers. In 2014, Matuszak brought that never-give-up attitude to Brazilian Jiu-Jitsu.

Matuszak, from Westbury, was born with cerebral palsy and late last year earned his blue belt in jiu-jitsu from Pete Sell and Dave Patton, who are black and brown belts, respectively, under former UFC welterweight champion Matt Serra.

Last September, Matuszak, 20, faced a new opponent, one unlike any other he encountered in jiu-jitsu or in life. He was diagnosed with esophageal cancer. He lost that fight on Wednesday night, surrounded by his family.

“He touched so many people’s lives,” said his father, Edward, after Ian’s funeral on Friday. “I’m so proud of him. You couldn’t ask for a better son. He worked so hard and never let his handicap get in his way.”

Chris Weidman, a former UFC middleweight champion, met Matuszak at the grand opening of his gym in 2014 and found his will inspiring. It was at that event when Patton asked Matuszak to try jiu-jitsu.

“He responded to me, ‘Well, I have cerebral palsy,’” Patton said. “I said to him, ‘Well, I’m a moron and I overcame that, so why don’t we try?’ But from that point on was all him. Everything that happened was his hard work.”

Matuszak would go through hourslong jiu-jitsu training, same as everyone else, including the MMA fighters he admired. In those hot rooms, on sweaty mats and wearing his Gi, Matuszak insisted on being treated like anyone else in class. His wheelchair was off to the side and his training partner in from of him. He was free. A poster of Matuszak now hangs at Longo & Weidman MMA in Garden City — on the same wall as the UFC fighters he adored, and who in turn, admired him.

Matuszak embraced the sport, befriending legends along the way.

“Who gets an invitation from Royce Gracie or Renzo Gracie to work out with them?” his father said.

“Normally, we think our life is tough and we make excuses sometimes to train, to do what we love,” Renzo Gracie said as he fought back tears. “And you see a kid like this, attached to a wheelchair, unable to move his body with the right coordination that normal people have. And you see his will to still learn, to still push, to show me moves.

“People always ask why I smile so much. I have people like him.”

Weidman befriended Matuszak quickly. They exchanged text messages regularly. Last December, Weidman had Matuszak and his family flown out to Las Vegas for his title fight against Luke Rockhold at UFC 194. Weidman surprised Matuszak by inviting him to walk out to the Octagon with him for his fight.

Weidman wasn’t the only one moved by Matuszak’s spirit. The funeral was standing-room only, with others in the lobby watching the services on a big-screen television.

Scroll through Matuszak’s Facebook page and Twitter timelines since September and you’ll find dozens of messages of hope and encouragement. Go back even further, before he was diagnosed with cancer, and you’ll see the same things. From friends and classmates at Clarke High School and LIU Post to a few Brazilian Jiu-Jitsu and MMA legends.

Brittany and Danielle Cafiero, two of Matuszak’s friends from Camp Anchor in Lido Beach, spoke at his funeral and recalled a Facebook post he wrote that encapsulated his spirit: “I don’t know how my story will end, but never in the text will it say I gave up.”

“We buried him in his Gi,” his father said. “We felt it was right for him because that was his life. That made his life. He found a sport that he could do, that he loved, in a community of people, it’s such a brotherhood over there.

“He would go to a competition, and he’d lose, he didn’t care. Went to the next one, lost that one, didn’t care. He just never let it affect him at all.”

At the cemetery, Weidman, Patton, Sell and others honored Matuszak by placing those belts in his grave. Gracie, whose grandfather Helio Gracie invented the sport that became so dear to Matuszak, was the last fighter to approach the grave. He placed a black belt in Matuszak’s grave.

“It was a tribute to Ian. He loved jiu-jitsu,” Weidman said. “He took a chance and broke barriers by getting on the jiu-jitsu mat and doing things no one could ever think he could do.”

Weidman lost to Rockhold last December, his first professional loss in mixed martial arts. He went to the hospital that night.