LAS VEGAS -- First question to Daniel Cormier at Wednesday's UFC 187 open workout had a little Jon Jones twinge to it. Second, third and fourth ones, too.

A few of similar theme went toward Anthony "Rumble" Johnson when he took his turn answering questions from the media after throwing some punches and kicks for cameras and fans.

But it's Johnson who will fight Cormier for the vacant UFC light heavyweight title on Saturday. Jones is not around, having been stripped of his title last month for a felony charge of leaving the scene of an accident that injured a person in Albuquerque, New Mexico.

So, for this segment in the chronicling of UFC 187, please focus on the actual fighters stepping into the octagon for Saturday night's main event. 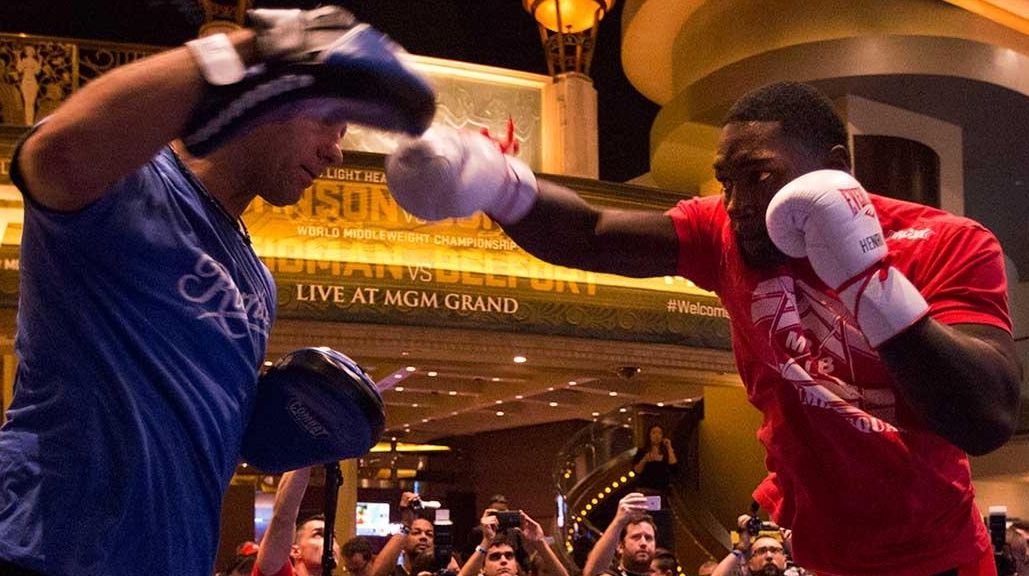 UFC 187 open workouts: Cormier, Johnson Daniel Cormier and Anthony Johnson will fight for the vacant light heavyweight title at UFC 187 on May 23, 2015. But, first, on May 20, there were the open workouts at the MGM Grand in Las Vegas. (Newsday/Jeffrey Basinger, Mark La Monica)

While both Cormier and Johnson provided acceptable answers to the Jones questions, neither shed any new light on the issue. Besides, what they said about each other was far more interesting.

"If he believes his power is that strong, great," Cormier said about Johnson. "But I hope he has plan A, B, C, D, E and F -- G, you know, because I almost forgot my damn ABCs there."

"People haven't had a chance to see everything that I have to offer, I usually knock people out," Johnson said. "Can't show everything when you're knocking people out."

Cormier (15-1, 4-1 UFC) is a two-time former U.S. Olympic wrestler who has good striking as well. When he's not fighting, he also works as co-host of "UFC Tonight" on Fox Sports 1. So yes, Cormier can talk as good a game as he fights.

"Just having power is not going to be enough to win a fight against me," Cormier said. "Maybe it was enough to beat Alexander Gustafsson and Phil Davis and the rest of those guys, but they're not Daniel Cormier."

Cormier called Johnson a bully in the cage, someone who likes to push his opponents back and trap them. Cormier said he doesn't plan to allow Johnson to bully him.

"I'm not a bully, I just do what I wanna do," Johnson said. "I get people in situations they don't like."

Cormier knows Johnson has more than significant power. But, does he respect those hands?

"Yeah, I think he does," Johnson said. "He has no choice, actually. Because if he doesn't, he's gonna go to sleep."