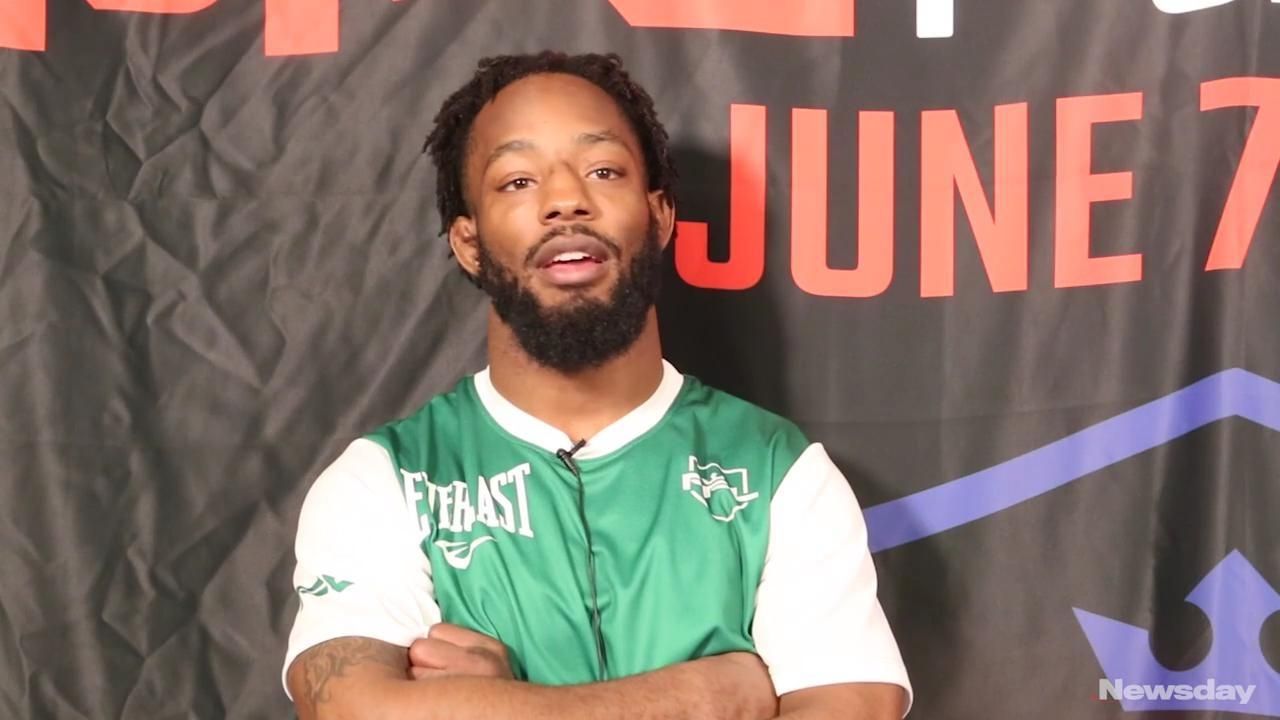 The Freeport product did what he does best in the regular season debut for the rebranded Professional Fighters League, smothering his opponent to stay unbeaten as a professional with a unanimous decision win over Jumabieke Tuerxun (30-27, 20-37, 30-26) at PFL 1 on Thursday night at the Hulu Theater at Madison Square Garden.

“The atmosphere was amazing,” Harrison said. “The fans were loud and seemed like they were enjoying it and I enjoyed putting on a show for them.”

Harrison (18-0) opened the fight looking to work his kicking game, going high before throwing leg kicks, including one to the knee that knocked Jumabieke off his feet. Jumabieke (17-5) soon shot for a takedown, but Harrison defended and looked for a choke. Jumabieke fought off the submission, but Harrison held top position until letting Jumabieke back to his feet. Harrison continued to land with his kicks, attacking the knee he hit earlier. With a minute left in the round, Harrison landed a takedown against the cage, settling in half guard and working his strikes.

Harrison opened the second round again looking for kicks. When Jumabieke tried for a takedown, Harrison again looked for a submission, only to again let him to his feet. Harrison began to let his hands go a bit more later in the round, sending Jumabieke scrambling. Harrison wound up on top aiming for a choke but couldn’t find the right hold to finish the job.

In the third, Harrison began landing punches with more power, connecting on an uppercut that staggered Jumabieke. When the opportunity presented itself, Harrison landed a takedown and again worked into half guard. With just over a minute left, Harrison looked for the finish with strikes. At multiple times in the fight, Harrison was in a good position to throw heavy elbows, but was unable to do so due to PFL’s modified rules.

“I’m telling you right now, it hurt my spirit not to drop elbows,” Harrison said. “I got a little emotional walking back to the corner, because if I could’ve dropped elbows, I would’ve done a little decorating down there.”

Harrison said the no-elbow rule altered how he tried to finish the fight.

“1,000 percent. The elbow is an extra weapon and I had a weapon taken away,” said Harrison. “It definitely does change it a little bit. The elbows would’ve been lovely, but I’m not going to make any excuses, it is what is.” 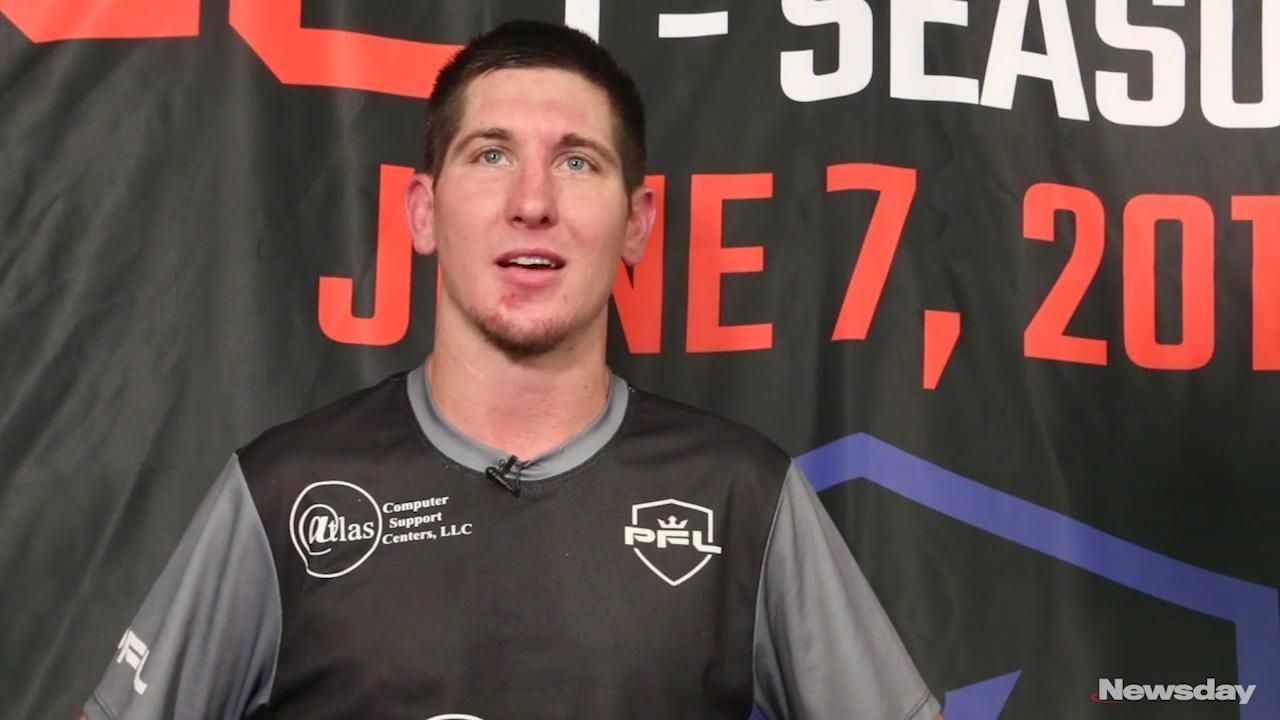 PFL 1: Siler on his comeback submission Steven Siler was dropped in the first round, but the veteran fighter rallied back to win by submission over Magomed Idrisov at PFL 1 at MSG's Hulu Theater on June 7, 2018. Credit: Newsday/Mark La Monica

Harrison held his elbows back and ended the fight on top with a nice cheer from a nearly-full crowd behind its local fighter.

“I definitely think I could’ve followed up more with some better combinations and some different combinations and could’ve done a little more when I was on the ground, but at the end of the day it’s better to learn off a win than learn off something else,” Harrison said. “So I’ll take it, man, I’ll get back to the gym and I’ll do what I’ve got to do.”

Harrison, formerly the featherweight champion in World Series of Fighting before its rebrand to PFL, earned three points in the promotion’s featherweight division under its new format with the decision victory. He sits tied for fourth place in the 12-man standings, which determines seeding for the eight-man playoffs later this year. After a 10-month layoff, Harrison will fight once more during the regular season in the next few weeks.

“Either way, whether I have to wait another 10 months or another four weeks, I’m not going to get out of shape, I’m always in shape, I’m always training,” Harrison said. “Me having a quick turnaround is probably better because I can get right back into it.”

But first, Harrison will reward himself.

“I don’t really care about the time frame so much. Right now the only thing I want me is a big old greasy burger with a little extra oil on it,” Harrison said. “I want the buns slipping off the top of it.”

Bekbulat Magomedov and Lance Palmer showed off their wrestling prowess early in their featherweight showdown. Both men staved off takedowns early in the round, but Palmer got the best of Magomedov and sent him to the floor. In the second, Palmer was able to break through in the grappling matchup. He eventually took Magomedov’s back and soon flattened Magomedov out, forcing the tap at 3:21 and picking up five points.

Timur Valiev was in control early in his featherweight matchup with Max Coga. After exchanging strikes early, Valiev got the fight to the ground and worked to take Coga’s back, but Coga worked his way to his feet. In the second, Coga was able to drop Valiev, but the Russian returned to his feet quickly. Valiev was back in control when the fight went to the ground, but nothing came of it. Coga nearly had Valiev caught in a submission after a back-and-forth beginning to the third, but Valiev escaped. The pair had some nice exchanges to close a tough battle, but neither could get the finish. The judges ultimately gave the decision to Valiev (30-27, 30-27, 29-28), handing him three points in the featherweight standings.

Jake Heun and Alex Nicholson both came out looking to work combinations, although it was Heun who seemed to get the best of the exchanges, sending Nicholson to the mat late in the round. Heun looked to be controlling the fight again in the second round — until he wasn’t. Nicholson got a running start on a massive flying knee and put Heun on his back. He landed on top of Heun, but the official called the fight before more damage could be done, earning the win at 0:58 and picking up five points in the standings.

UFC veteran Jared Rosholt did his thing early in his heavyweight bout with Valdrin Istrefi, controlling the action and maintaining top position through much of the first round. At the end of the round, Rosholt dropped Istrefi with a big knee and went for a submission at the bell. In the second, Istrefi tried to control the grappling exchanges, but Rosholt again wound up on top where he finished the round. Another third round of Rosholt smothering Istrefi followed and the judges gave Rosholt the victory (30-26, 30-25, 29-28) and the three points.

In the first round, Long Island MMA’s Marcos Galvao traded blows with Nazareno Malegarie, but neither could land anything of significance. After a few more minutes exchanging punches to open the second, the jiu-jitsu black belts finally went to the ground with Galvao looking for arm locks but unable to complete a submission as Malegarie maintained top position. Malegarie landed the hardest punch of the fight about a minute into the final round, but Galvao powered through. Galvao had Malegarie bloodied by the middle of the third and finished strong as fans chanted his name to close the fight. Ultimately, it proved to not be enough as the judges ruled in Malegarie’s favor, 30-27, 29-28, 29-28, giving Malegarie three points in the featherweight standings.

Caio Alencar and Kelvin Tiller spent the first few minutes of their heavyweight bout grappling with little consequence. Although Alencar appeared to be working to a better position, referee Dan Miragliatta stood up the fighters. When the fight restarted, Tiller ducked a punch then took one massive swing with his right hand at Alencar, sending him crashing to the canvas for a walk-off knockout and winning the six full points in just 3:34.

Magomed Idrisov put Steven Siler down with a big punch about two minutes into the first round, but Siler was able to survive the onslaught on the ground and eventually return to his feet. Idrisov continued to land, but after swinging big, Siler shot for a takedown and after a scramble, slapped on a triangle and forced the tap at 4:19 to earn six points in the featherweight standings.

Alexandre Almeida quickly earned six points in the featherweight standings, beating Lee Coville in just 1:22. Shortly after the opening bell, Almeida and Coville began to grapple, but Almeida clearly had the advantage. After a few transitions, Aleida grabbed hold of Coville’s arm and settled in for the armbar, forcing a quick tap.

Josh Copeland vs. Jack May

In the final bout of the night, which was moved to after the main event for broadcast reasons, Josh Copeland and Jack May started off like they were late to a dinner reservation. Both rushed at each other swinging wildly, occasionally connecting. May landed more as the round progressed and continued to pressure Copeland. Eventually, May landed a front kick to the body of Copeland that caused the UFC veteran to loudly grunt in pain. May followed with punches and picked up the finish at 4:30 to earn the full six points.