Chris Weidman at Ray Longo MMA during training camp for his title shot against Anderson Silva at UFC 162. (May 27, 2013) Credit: Newsday/Mark La Monica

Weidman knew that if he wanted to be serious about a career in MMA, he’d have to see Longo. His Brazilian Jiu-Jitsu instructor — former UFC welterweight champion and Longo disciple Matt Serra — sent him to Longo’s warehouse gym in Garden City.

“I was nervous coming down just to meet him,’’ Weidman told Newsday. “I remember, I came in, said ‘Hi’ to him. He wasn’t overly friendly because there were guys getting ready to spar.’’

That was Day One of a trainer-fighter relationship that has produced 10 wins in 10 attempts, the biggest of which, No. 10, was a stunning second-round knockout of Anderson Silva for the middleweight championship last July at UFC 162 in Las Vegas. 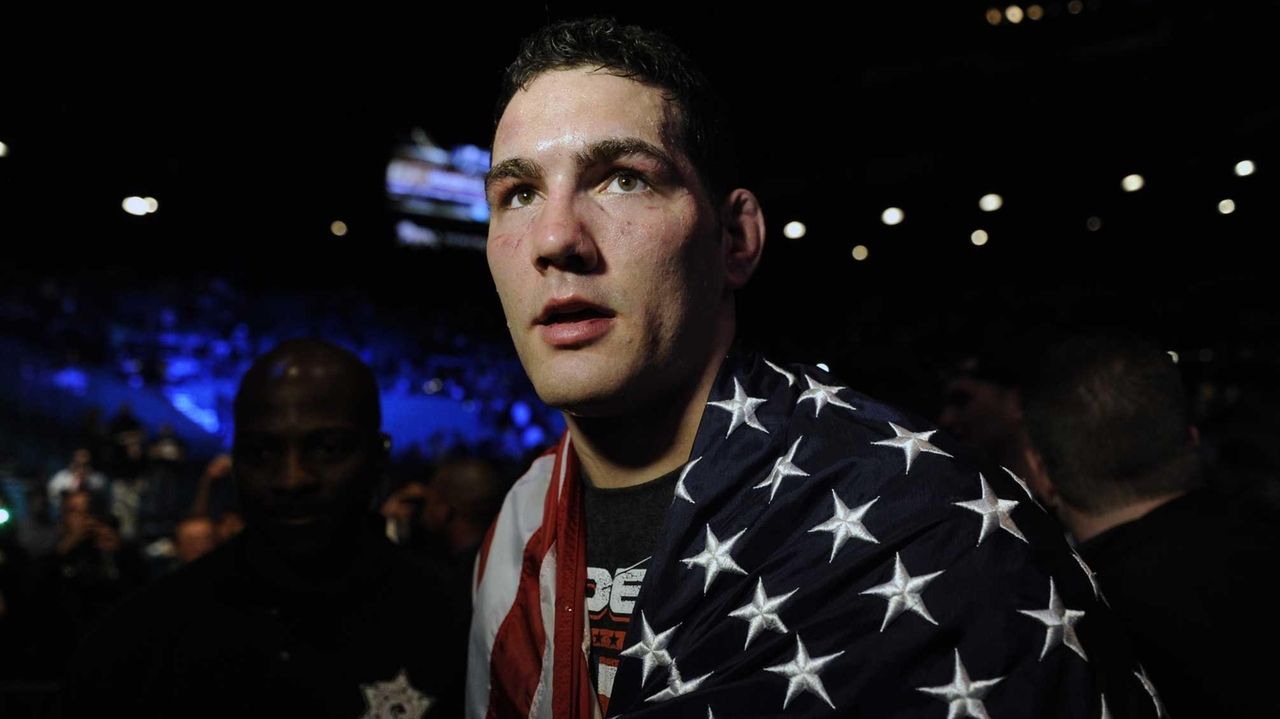 Longo will walk Weidman to the cage and corner him for an 11th time Saturday when he defends his title for the first time. The opponent? Anderson Silva at UFC 168 at The MGM Grand Garden Arena in Las Vegas. Same opponent, same venue, same New York accent shouting instruction from the corner.

Weidman threw his first real punch with Longo. Even after every punch since, be it hitting an opponent or just hitting pads in the gym, Longo remembers vividly his first encounter with the Baldwin wrestler.

“The first day I met Weidman — first day — he comes in, I’m just watching sparring,’’ Longo said. “I sit next to him. The guy starts asking me questions on the sparring. I’m like, ‘I can’t believe this guy is just a wrestler, his observations were dead on.’’

Weidman said he knew a couple of the guys sparring at the time and had coached them in wrestling, so, by force of habit, he started shouting out instructions. Longo liked what he heard.

“Then we start talking about what it’s like to be married and run the gym,’’ Longo said. “It wasn’t just about fighting. I liked this guy, just a great, great kid. We must have talked until 2 in the morning. We just sat there and talked. It was really a connection from right there.’’

And that’s how it began. A neighborhood kid with a lofty goal and a guy who honestly wanted to help him achieve it. That’s the Longo M.O., a formula that worked for East Meadow’s Serra, who under Longo’s guidance in April 2007, became the only man to knock out Georges St-Pierre and take his UFC welterweight title.

But Weidman left an impression on Longo. Another fighter contacted Longo about some sparring time for an upcoming fight.

“Weidman’s there, he just puts shin pads on and gloves, he goes in,’’ Longo said. “Weidman just went in and crushed the guy. I’m talking leg-kick crushed him. Chris trained three or four times. I mean, mauled the guy. I was like, ‘This kid is special, man.’

“He didn’t have a mouthpiece,’’ Longo continued. “So he saw one laying on the floor, he picked that up and put it in his mouth.

“You know like the All-Madden team? I got an All-Longo team. Weidman’s in there, man. He’s front and center, man. He picked up some poor guy’s mouthpiece and stuck it in his mouth and then threw it back on the floor. And, about two days later, what’s his name, Sergio, comes in and goes ‘Oh, my mouthpiece.’ I tell him, ‘I’d wash that out.’ ’’

Longo laughs about that day still. But he uses that story to help illustrate the drive Weidman possesses to pursue his dream and his willingness to do what’s necessary to reach that precipice. Example: Dropping 34 pounds in 11 days to fight Demian Maia in January 2012 because he knew what it would do for his career. At that time, Maia was a top-five ranked middleweight and Weidman still had “top prospect’’ attached to his name.

“That’s the type of guy he was, he was getting in there no matter what,’’ Longo said. “You weren’t stopping him. So is that is any different than him losing 30 pounds in a week? No. He wants what he wants and he’s wiling to sacrifice and pay the price for it, which is pretty cool.’’

Yankees hit five homers as Kluber beats former team
Nimmo back in Mets' lineup
Liberty beat Mystics, hang on to playoff hope
Aaron Boone on potential returns of Severino and Germán
Kluber pitches well against Cleveland, his former team
Wilson excited for first game vs. Patriots
Didn’t find what you were looking for?