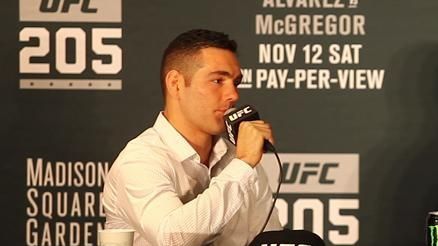 On Saturday, Nov. 12, 2016, at UFC 205, Baldwin's Chris Weidman talks about what it was like to fight in his hometown at Madison Square Garden. (Credit: Mario Gonzalez)

It was the walk he has dreamed about for several years. From underneath the stands onto the main floor and into the UFC’s octagon located in the center of Madison Square Garden.

Chris Weidman, who grew up in Baldwin and became a two-time All-American wrestler at Nassau Community College and Hofstra, helped get that octagon into the Big Apple. Even before he became the UFC middleweight champion in July 2013, he campaigned in Albany alongside UFC officials to bring his chosen sport to his hometown.

Weidman made that walk last night, not as a champion in the UFC, but as a hometown hero of sorts to many of the 20,000 fans in attendance at UFC 205. When he first entered the arena, he paused for a second to soak it all in. 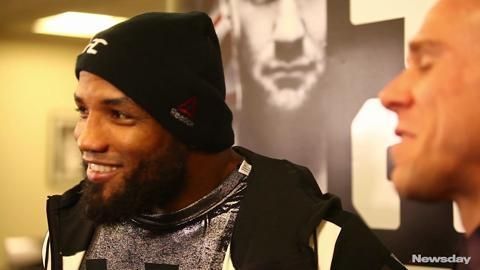 “It was everything I imagined,” Weidman said, then paused. “Until I lost.”

But the walk most people will remember in the immediacy of UFC 205 was Romero leaping over the cage and marching like a soldier around the octagon after his victory by technical knockout 24 seconds into the third round.

All three judges had the fight even after two rounds. In the third, Weidman shot in for a single leg takedown on Romero’s lead right knee. As he was doing that, Romero stepped in and landed a flying left knee to Weidman’s head. Weidman fell to the canvas and Romero swarmed him.

Romero then connected with three big shots before Weidman rolled over to protect himself. Romero (12-1, 8-0 UFC) added a few more shots before referee Mario Yamasaki stepped in to stop the bout.

“I am extremely happy,” Romero said. “There are no words to express how I feel in this moment. Every fight of this magnitude will always be difficult. There was a lot of back and forth and I did my best to take advantage of situations as they came. I waited on him to rush in. I thought he was beginning to feel comfortable enough to do this and then I caught him with the knee.

“It is an honor to be a part of UFC 205 in Madison Square Garden but now I want my shot at the title.”

It is the second straight loss for Weidman (13-2, 9-2). He lost his middleweight title to Luke Rockhold last December by fourth-round TKO.

Since that loss, Weidman was singularly focused on getting his belt back. No easy feat in the UFC. This fight against Romero was likely to decide who champion Michael Bisping would defend his title against next.

Bisping was at the Garden as part of the Fox Sports 1 broadcast team. He was shown on the big screen during Romero’s post-fight interview. Bisping waved hello, then gave him the middle finger.

“I love you,” Romero said in response to Bisping. “See you soon, boy.”

Romero, who fights under the nickname “Soldier of God” has won eight straight fights since joining the UFC.

In the first round, the “U-S-A” chant started quickly in favor of Weidman against the Cuban Olympic freestyle wrestling silver medalist in 2000. Weidman was the aggressor early, throwing a significant number of low leg kicks to keep Romero at a distance and to punish him.

Weidman shot in for single-leg takedowns throughout the first round. He landed a couple, but Romero was quick to hop back up. Still, Weidman kept the pressure by moving forward. Weidman got a takedown in the last 30 seconds and the round ended with Weidman clinched up against the cage with Romero.

Weidman opened the second round looking for a takedown, but Romero stuffed it again. A “Let’s go, Weidman” chant erupted from the crowd.

Romero began to get more comfortable in the second round as he connected on a few shots. They didn’t seem to faze Weidman as he kept moving forward. In the final 90 seconds, Romero was able to trip Weidman for a takedown, but Weidman got back to his feet and walked along the cage while in the clinch to keep Romero moving and away from being able to mount an attack.

“That walkout was truly special for me,” Weidman said. “Just all the dreams being realized. I’ve had so many ups and downs in this sport, and so many times I thought this was going to get legalized and imagined fighting here in New York. For it to finally happen and to have a crowd like that and have that type of support, after traveling around the world fighting everywhere else besides my home state, it was a dream come true walking out.”

After the fight ended, Weidman made another walk from the octagon to backstage. It was not the walk he planned to make.

Clark Gillies: Big man for Islanders, big man for LI
A look at the NFL offseason coaching carousel
Nets' James Harden: 'I've got my swagger back'
It's a whole new ballgame when it comes to getting into Hall
Rangers' Georgiev leads off in goal in first half of back-to-back
Islanders legend Clark Gillies dies at 67
Didn’t find what you were looking for?