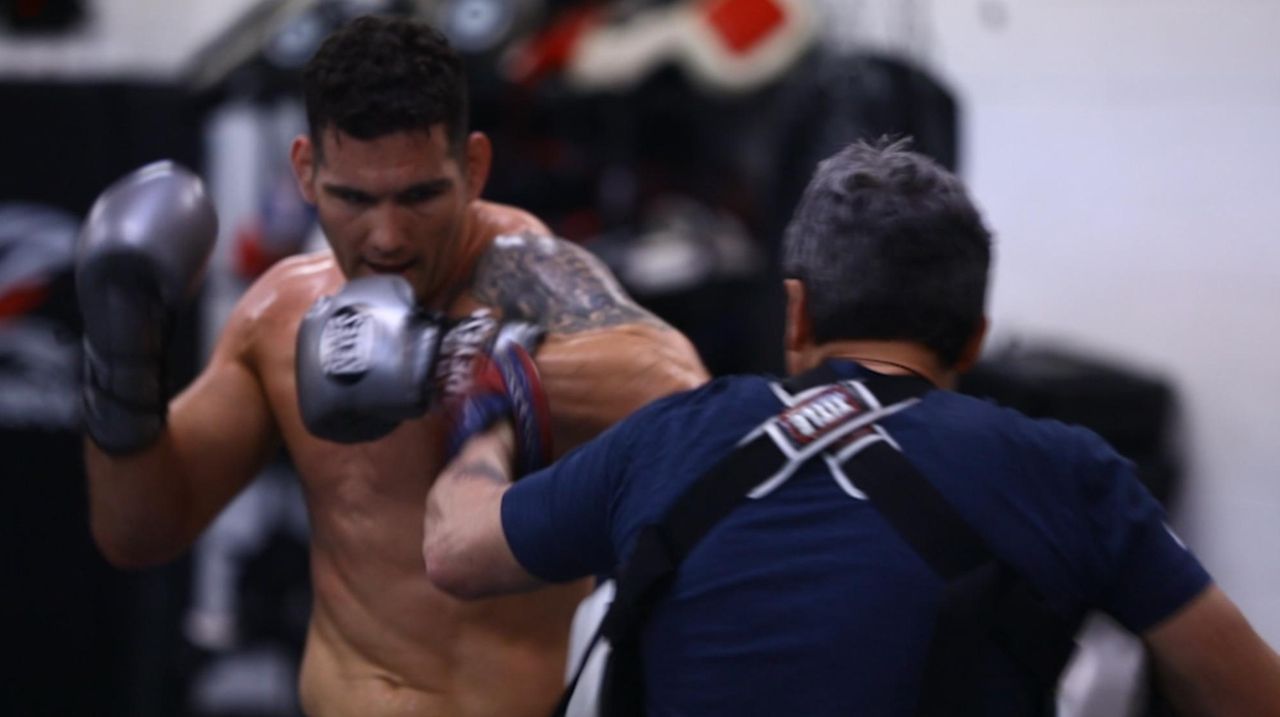 On Tuesday, March 28, 2017, former UFC middleweight champion Chris Weidman spoke about his upcoming fight against Gegard Mousasi in UFC 210 at the KeyBank Center in  Buffalo on April 8. Weidman said he is using his two-fight losing streak as motivation, and that he is in better physical and mental condition than ever before. Credit: Newsday / Jeffrey Basinger and Mark La Monica; UFC

His bags were packed, his wife and three children already out of the house to make the temporary transition emotionally easier for everyone.

Chris Weidman filled those bags with enough clothing and fight gear for a few weeks of training and another in Buffalo for his fight against Gegard Mousasi at UFC 210. He was headed to his parents’ house in Baldwin to live in their basement — just like when he first started his career as a wide-eyed wrestler with dreams of fighting his way up the stairs, out the door and into a home and life of his own with his wife.

He got as far as the door.

“I packed up everything, I felt great, and I literally had a breakdown,” Weidman said. “I felt all confident about it, I was good. All of a sudden, I sat down.”

Weidman called his wife, Marivi. She said they could board their new puppy, and he could live out of their guest room and avoid much of the chaos (and germs) of a home with three young children.

“I feel like I’m living more caveman-like,” Weidman said. “I go back home, I nap now if I need to. I’m in a dark room again. I feel like I’m in my parents’ basement, but I do have my family there when I need them because I love them to death and I need them.”

This particular moment of attempted geographical shifting underlies a new mentality for Weidman (13-2) as he brings a two-fight losing streak — the longest and only one in his career — to Buffalo’s KeyBank Center Saturday to face Mousasi (41-6-2).

Actually, it’s an old mentality, something closer to that day years ago when he picked up a random mouthpiece off the floor to get into the cage and impress the man who would become his trainer, Ray Longo.

“He made a lot of sacrifices for this fight,” Longo said. “There’s more to life than just fighting, though. But we want him a little ornery and cantankerous for this fight.”

Weidman returns after a knockout loss against Yoel Romero at UFC 205 in Madison Square Garden last November. That was the first fight in New York after a years-long politicial fight to legalize mixed martial arts in the state, a fight Weidman regularly lent his voice and stature to over the past three years.

It was supposed to be his glorious homecoming moment. Rather, it ended with a bloody defeat and the wrong side of the No. 1 spot on several “Knockout of the Year” lists.

“From the outside looking in, I don’t have the momentum,” Weidman said. “I’m on a losing streak. I’m in a slump. I feel like what people don’t realize is that a comeback for athletes is even more motivating than anything else. I’m more motivated than I’ve ever been. A lot of people are writing me off almost like as if I went through my prime already and my time is gone. And that’s so motivating for me.”

Athletes often cite Sylvester Stallone’s “Rocky Balboa” character as inspiration in their career. They see the underdog, the guy who got his shot in “Rocky” then won the title in “Rocky II.”

Few point to a viewing of “Rocky III” on a cable TV station as a source of motivation. (That’s the one where Balboa is the reigning champion, gets comfortable, loses his edge and his title then has to go back to the beginning and gets help from an old friend in Apollo Creed.) Weidman was watching the movie with his children one day. Suddenly, he felt a pit in his stomach.

“Wait a second, is this me?” Weidman said. “I’m living in this nice house. I’ve got everything going on — not that I’m set for life, I gotta work, but I’m in a way better spot than I was . . . I started feeling, ‘Am I Rocky in this story?’ I gotta switch things up.”

That put him in the doorway of his own home. Now he stands at another threshold, one he hopes carries him to victory over Mousasi the way his passion for his family kept him at home.

Lightweight: Will Brooks vs. Charles Oliveira