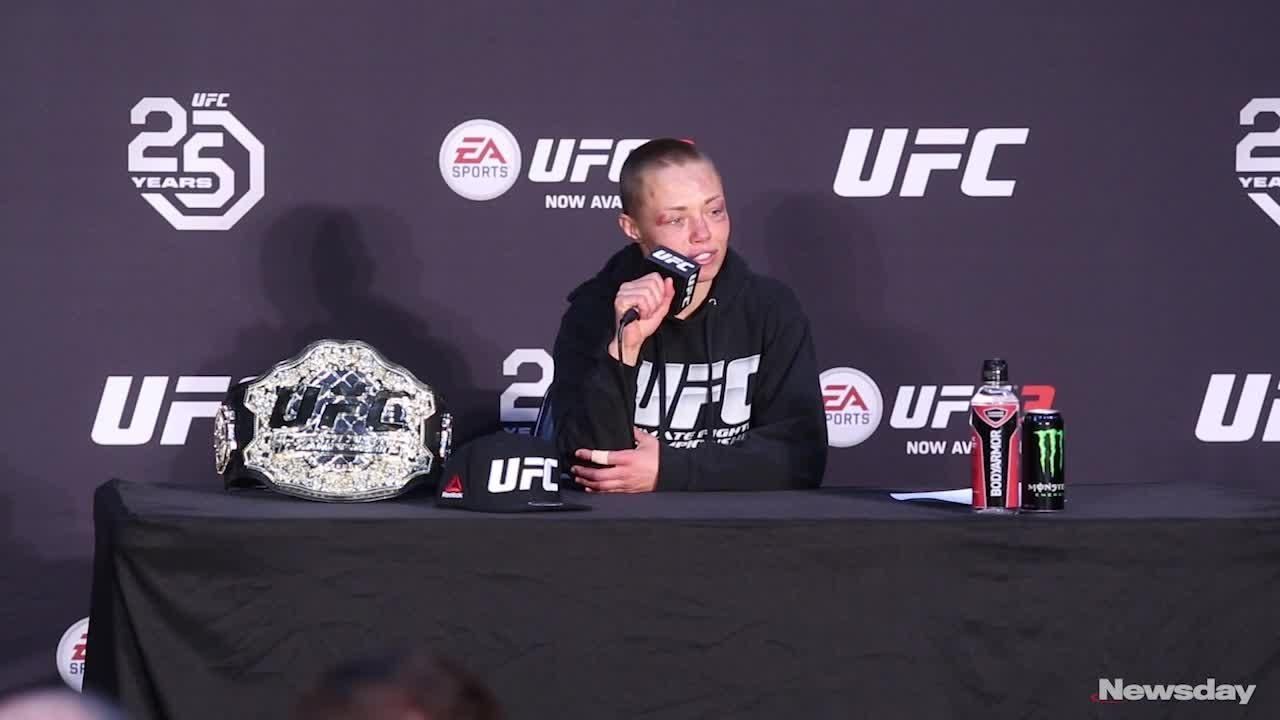 Joanna Jedrzejczyk assured everyone that her loss to Rose Namajunas at UFC 217 last November at Madison Square Garden was a fluke.

Turns out she was wrong.

Namajunas couldn’t get the knockout this time, but she came out on top in the rematch at UFC 223 on Saturday at Barclays Center, retaining the women’s strawweight title via unanimous decision (49-46, 49-46, 49-46).

“I was just better, man,” Namajunas said in her post-fight interview.

Namajunas got ahead early, landing a few big left hooks that stunned Jedrzejczyk but didn’t drop her. Jedrzejczyk was able to counter with some impressive combinations but had trouble keeping away from Namajunas’ left hand.

Early in the third, Namajunas landed a hard right, but Jedrzejczyk quickly recovered. Jedrzejczyk opened up the kicking game and started to better gauge distance, but Namajunas’ punches mostly kept her at bay.

“I just kept saying I’m the best, just kept saying that to myself, I’m the best," said Namajunas of the middle of the fight. "I just had to accept that my feet aren’t moving as well. I just kind of abandoned the game plan a little bit and just went out there and had fun and was just like, [expletive] it, I’m just going to slug instead of trying to be quick right now because it’s not working.”

With a seemingly razor-thin margin entering the fifth, both came out throwing big combinations. Jedrzejczyk looked for a knee to the head but was bloodied in the process by Namajunas’ counter. The champion secured her first takedown of the fight with 20 seconds left, but Jedrzejczyk prevented anything from happening before the final horn, leaving the crowd ready for a trilogy fight.

When the scores were read, Jedrzejczyk said she thought she had the belt back, saying she landed more strikes throughout the fight.

“When I heard Bruce Buffer say the numbers of how the judges scored the card, I expected that I was going to win by split decision, and when I heard the difference I was like, ‘OK, I’ve got the win easy,’” Jedrzejczyk said. “It was really big surprise, and the numbers don’t lie.”

In their first meeting last November, Namajunas pulled a massive upset over Jedrzejczyk, knocking out the then-unbeaten champion in the first round. Jedrzejczyk attributed the loss to a bad weight cut that left her feeling unlike herself on fight night.

The weight cut, however, wasn’t a factor this time around. Jedrzejczyk said Thursday that her cut was going just fine. She weighed in at 114 pounds without issue on Friday, one pound below the championship weight.

Namajunas’ status for the bout briefly came into question on Thursday after the chaos created by Conor McGregor and his teammates after the event’s media day. Video showed McGregor throwing a handcart at a bus carrying fighters from the event, breaking a window. Namajunas was among those on the bus and was shaken by the incident, according to UFC president Dana White, but she stayed on the card.

“It shook me up just because I didn’t know how far it was going to escalate,” Namajunas said. “All the guys inside, they wanted to fight back, they wanted to go jump out of the bus, but I don’t know if they’re going to open the door and they’re going to all come in. They’re obviously not directly after me but I’m just caught in this scenario, so I don’t know, my imagination goes crazy.”

Golladay says his ire was directed at Garrett, not  Jones
Travis Zajac retires from the NHL
Barker: Liberty's playoff berth proves they're heading in right direction
Bullpen comes through as Yankees hold on to beat Rangers
Lennon: Even a rusty Severino could help Yanks down stretch
Boone thrilled to have Severino back to bolster bullpen
Didn’t find what you were looking for?