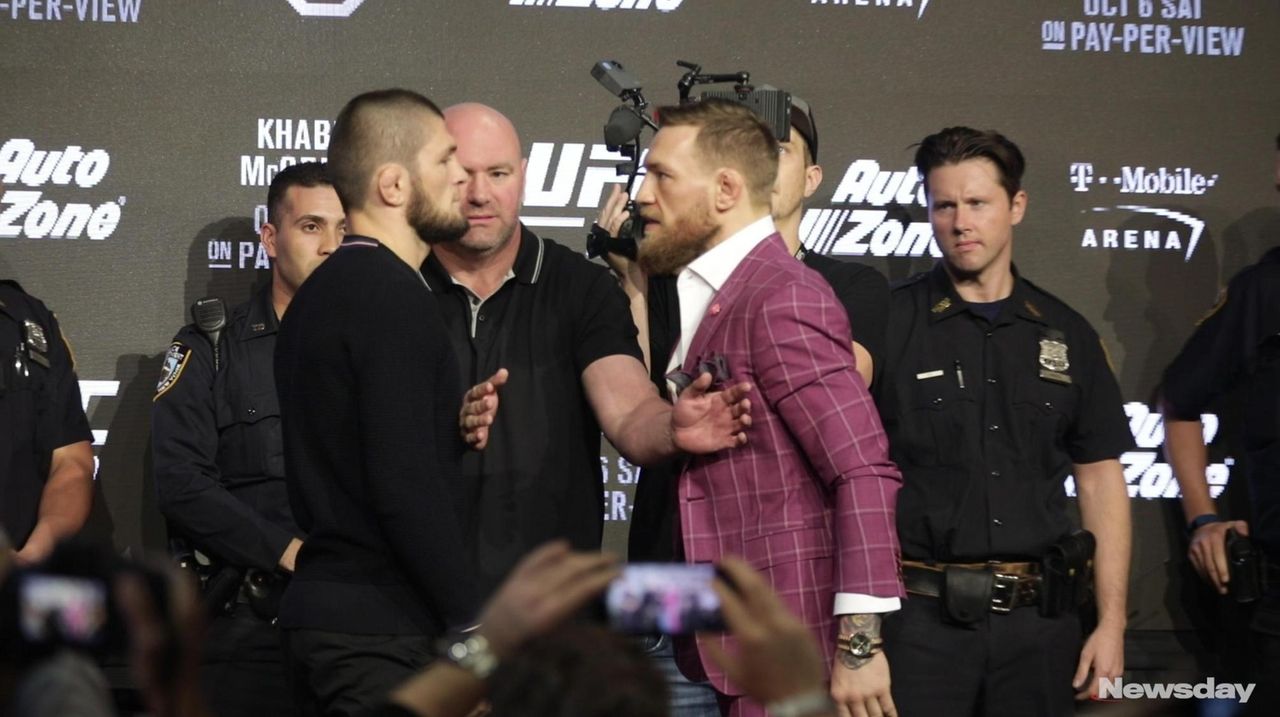 Conor McGregor brings much more to the UFC than the average mixed martial artist.

But more so than anything, McGregor brings chaos.

Fresh off a plea deal for his role in an April melee at Barclays Center that nearly derailed his combat sports career, the McGregor Show was back in the area to promote his return to mixed martial arts, bringing his notoriously chaotic energy with him.

Watch the Khabib-McGregor UFC 229 presser For the first time, Khabib Nurmagomedov and Conor McGregor meet face to face at the UFC 229 news conference at Radio City Music Hall at 6 p.m. Eastern on Sept. 20, 2018. Watch the live stream provided by the UFC.

“I came back for the love of this, to come and shut this man up, a little rat, a little weasel, a little hard man in groups,” McGregor said.

McGregor and lightweight champion Khabib Nurmagomedov appeared at Radio City Music Hall on Thursday ahead of their long-awaited battle for the UFC’s 155-pound title, scheduled for Oct. 6 at T-Mobile Arena in Las Vegas.

McGregor spent much of the press conference screaming into his microphone, jumping between taunts of Nurmagomedov, statements of his dominance in the cage and promotions for his new line of whiskey. At one point, McGregor offered a glass of whiskey to Nurmagomedov and UFC president Dana White, downing his own sample of the alcohol in one swig.

Nurmagomedov won the belt at UFC 223, the Brooklyn event McGregor and his teammates crashed looking for Nurmagomedov, and has been calling for a title fight with McGregor since the superstar first won the lightweight belt at Madison Square Garden in November 2016. That fight nearly two years ago at UFC 205 was the most recent trip to the cage for McGregor, who fought Floyd Mayweather in a boxing match last August.

The Conor-Khabib timeline for UFC 229

“I’m going to put him back to box,” Nurmagomedov said. “You have to fight only box because you cannot compete with high-level guys.”

McGregor was ready with plenty of ammo for the unbeaten Russian at the press conference, taunting his opponent with various digs at Nurmagomedov’s life outside the cage. On various occasions, McGregor brought up Nurmagomedov’s connection to jailed Russian oligarch Ziyavudin Magomedov, saying the billionaire’s money was the key to the fighter’s rise. McGregor also chided Nurmagomedov over his father’s inability to obtain a visa to visit the United States for the fight.

But most of the insults came back to the mayhem of UFC 223.

The bus contained numerous fighters who were scheduled to appear on the UFC 223 card two days later. McGregor’s actions caused three bouts on the card to be canceled.

Along with his teammate, Cian Cowley, McGregor pleaded guilty to disorderly conduct violations in July. He was conditionally discharged and was ordered to serve five days community service and attend anger management classes for one to three days. McGregor also had orders of protection issued against him for two UFC fighters, as well as a UFC employee, and was ordered to pay for damages to the bus at the center of the melee as well.

Despite the legal issues surrounding the bus incident, McGregor was quick to verbally jab Nurmagomedov for not exiting the bus and facing McGregor and his posse.

Unlike other UFC press events, no fans were at Radio City due to the Brooklyn debacle and the bad blood between the fighters. According to White, all parties involved were concerned enough about event security that three uniformed NYPD officers were present on stage during the staredown, in which McGregor entered into a shouting match with Nurmagomedov’s manager, Ali Abdelaziz.

“Obviously New York is concerned after what happened last time. I think the commission is concerned and frankly we’re concerned,” White said. “I ain’t as young as I used to be, so it’s not bad having some backup.”

While all involved insisted the incident was not a publicity stunt, official promotional material for the fight includes footage of the bus attack. White said using the footage was an easy decision.

“Not tough at all, it’s part of the storyline, it is what it is,” said UFC president Dana White. “There’s been other situations where things have happened leading up to a fight and you play the story the way it plays out.”

When asked his opinion on the bus footage being used to promote the fight, McGregor, for the only time all night, had nothing to add.

The Conor-Khabib timeline for UFC 229The path to Conor McGregor vs. Khabib Nurmagomedov is a long one, complete with hotel confrontations, broken glass, arrest records and court hearings.

Rangers trade Buchnevich to Blues for forward Blais and a '22 pick; choose LW Brennan Othmann
Without a first-round pick, it was all quiet on the Islanders' front
Yankees not willing to part with shortstop prospect Volpe
Mets trade for lefty Rich Hill to help fill void in rotation
Megill outpitches Matz, Alonso hits two HRs in Mets' win
After Yanks blow early opportunity, Devers drives in five with two HRs
Didn’t find what you were looking for?