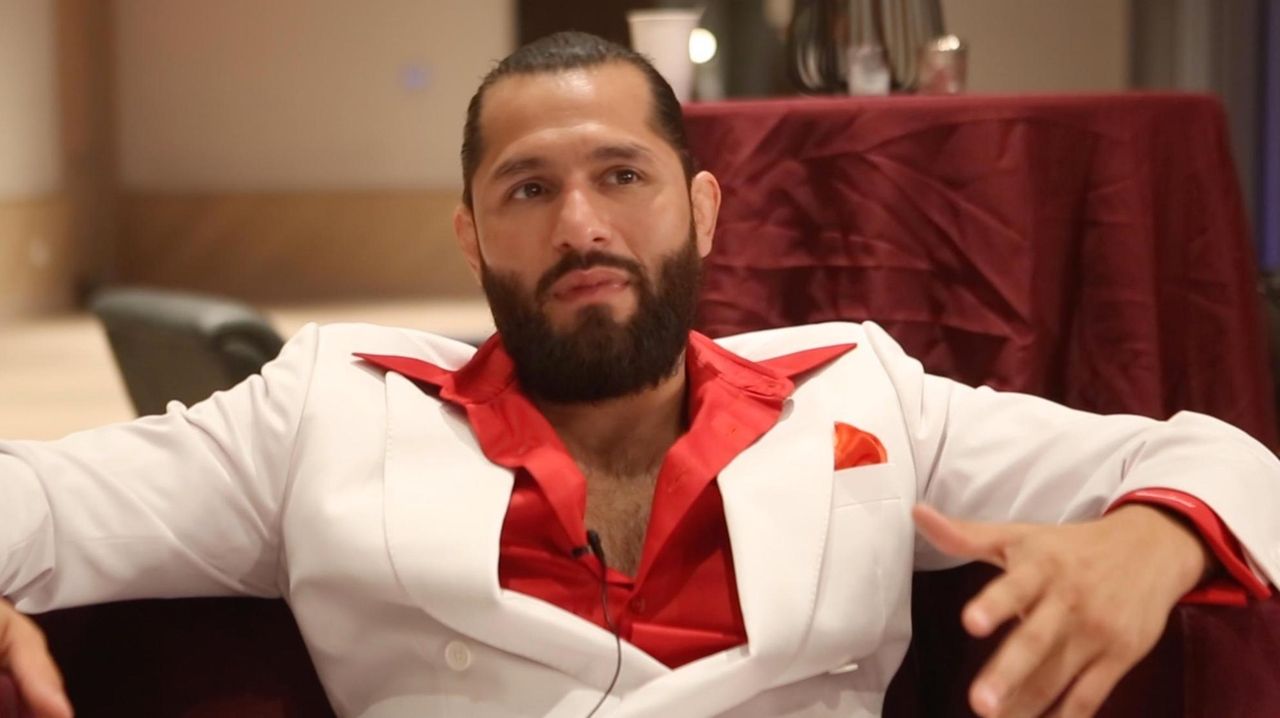 Nate Diaz, Jorge Masvidal and Dana White talked on Thursday about how their main event at UFC 244 at Madison Square Garden came together. Diaz and Masvidal will headline UFC 244 at MSG on Nov. 2. Credit: Newsday / Mark La Monica

Knockouts via flying knee a little less so.

And knockouts via flying knee where it's the first and only necessary strike and takes no more than five seconds to finish the opponent in a much-hyped fight, well, those bring about a rareness reserved for uncooked meat.

Here we have Jorge Masvidal, whose right knee became among the most famous body parts in UFC history after he launched into Ben Askren's face and ended their bout in a UFC-record five seconds at UFC 239 on July 6. Combine that with his crisp knockout of Darren Till in March, the post-fight backstage dust-up with Leon Edwards that led to Masvidal's colorful "three-piece with the soda" description of his unscheduled scrap with Edwards, and a star has been born.

That has catapulted Masvidal, 34, to the highest plateau of his career, which began in 2003 and includes 47 pro fights. Masvidal will headline UFC 244 at Madison Square Garden on Nov. 2 against Nate Diaz, the UFC's other cult-hero fan favorite.

“Me sitting up here means more zeroes in my back account, more money for my family so I’m ready for it,” Masvidal said Thursday night at the UFC 244 news conference at The Rooftop at Pier 17 in Manhattan. “I’ve beend doing this for a long time. I love to compete at the highest level possible. I love knowing the opponent in front of me is somebody known for kicking [butt] because that’s what’s motivating, and I’m more motivated than ever, bro.”

UFC 244 will be the first time the UFC has scheduled a non-title fight as the main event of a pay-per-view card since UFC 202 in August of 2016 when Diaz faced Conor McGregor. Will that be the right call? Judging by the noise and excitement coming from the 1,251 people who attended the news conference, perhaps. UFC president Dana White also said 10,000 tickets have been sold through presales. Tickets go on sale to the general public on Friday.

“Diaz and Masvidal are both very interesting characters and obviously awesome fighters,” White told Newsday. “The run that Masvidal is on, and what Diaz has done, and how Diaz called him out, it immediately made this a big fight.”

After Diaz (20-11) beat Anthony Pettis last month, he said he wanted to “defend” his belt as the baddest fighter in the game against Masvidal next. Technically, Diaz didn’t have a belt to defend. And he won’t after the Masvidal fight. But, for this fight, White said he has a UFC belt in the works for the winner. It’ll be one and done for that title, the name of which is not exactly family friendly and printable here.

“That’s the only belt I’m after anyways,” Diaz told Newsday. “… A lot of these beltholders and the way they get to it, winning rounds playing it safe and hugging on for dear life. I don’t find the winner in the guy who holds on for his life and tries not to let you get away. I think that’s a guy who’s more scared anyway.”

Masvidal (34-13), who wore a white suit and a mostly unbuttoned red shirt with no tie in an homage to Al Pacino's Tony Montana character in "Scarface," is the early betting favorite. But for neutral followers of the sport, this bout has no fan favorite. It represents two non-establishment types of fighters, each unafraid to speak their mind and each prepared to fight in the truest sense of the sport.

“I think a lot of my fan base, they understand the real,” Diaz, 34, told Newsday. “When you’re trying to hold stuff in and hide stuff out and say the right thing, it always comes out jacked up. But if you don’t say things, and when you do say something, you mean it and it’s real, or it’s a fact, people feel that.”

If the crowd at Thursday’s news conference was any indication, Diaz doesn’t have to say much to get his fans going. They chanted his name before he even made it to his seat.

There was an electricity on The Rooftop on Thursday for both fighters. That’s not always the case for a news conference, especially for a bout that is still six weeks away.