Inside an arena with no fans, UFC 249 made plenty of noise Saturday night.

The mixed martial arts promotion hosted the first major live sporting event in America since the COVID-19 pandemic took hold of the country in mid-March.

The night included one new champion, one retiring champion, one congratulatory video from President Donald Trump, plenty of declarations of happiness on social media, and two combatants who discovered a unique way to make in-fight adjustments.

But the loudest statement of the night inside the VyStar Veterans Memorial Arena in Jacksonville, Florida, belonged to Justin Gaethje. He battered Tony Ferguson with left hooks for four-plus rounds to win the interim lightweight title. Florida hasn’t heard leather pop that loud on a regular basis since bullpen sessions in spring training in February. 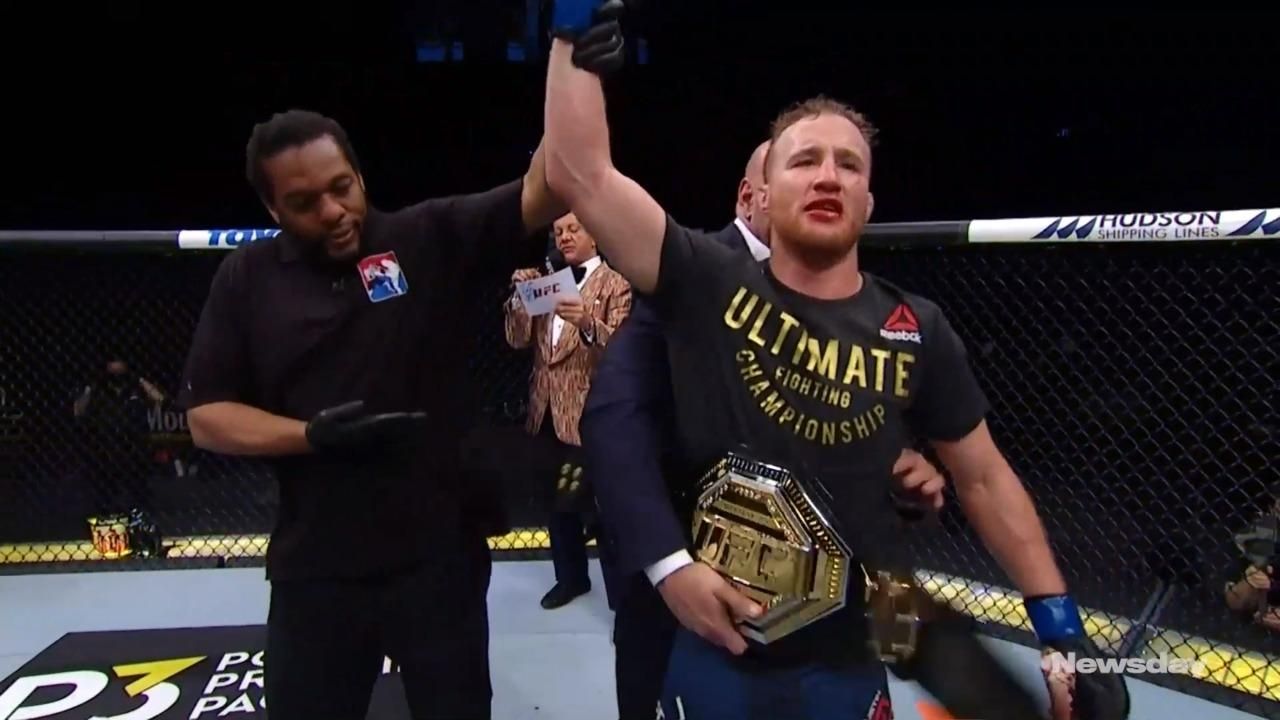 UFC 249 post-fight: Justin Gaethje Justin Gaethje stopped Tony Ferguson in the fifth round to win the interim lightweight title at UFC 249 in Jacksonville, Florida, on May 9, 2020.

“I’m a showoff, I know how many people were watching and it makes me happy knowing how good I made people feel, that feels great," said Gaethje (22-2, 5-2 UFC), who also earned performance and fight of the night bonuses. "It’s pure exhilaration, just screaming. Not just in this country, but all over the world."

Gaethje ended Ferguson’s 12-fight win streak and set himself up for a title unification bout against reigning undefeated champion Khabib Nurmagomedov, who originally had been scheduled to fight Ferguson at UFC 249 in Brooklyn on April 18 before the pandemic. Shortly after UFC president Dana White wrapped the interim title around Gaethje's waist, the fighter took it off and tossed it to the side.

"Wait for the real one," he said in the octagon.

“I can’t think of myself as the champion because for one I’m not, and for two, Khabib is still there," he said during his news conference afterward.

White never wavered about keeping fights going, even as state athletic commissions, governors and other officials issued bans on events and large gatherings.

The UFC devised a health and safety operations manual, which the Florida commission accepted and led to UFC 249 being the first of three fight cards in eight days in Jacksonville. The protocol identified Ronaldo “Jacare” Souza and two cornermen as testing positive for COVID-19 despite being asymptomatic.

"The whole world is weird right now. Everything's weird. This event's weird," White said. "It's different. We live in a different world than we did two months ago. The bottom line is the system worked. What you don't want to do is two days after the fight say, 'Awe, Jacare tested positive.' So it worked. The system worked that we put in place.

"The longer this goes, the better the testing technology's going to get and the faster it's going to get. We're going to prove by next Saturday that professional sports can come back safely."

Henry Cejudo defended his bantamweight title by stopping Dominick Cruz with two seconds remaining in the second round. Cejudo landed a knee that dropped Cruz then followed up with strikes. Cruz was working his way back to his feet when the referee stopped the bout, causing the former champion to voice his displeasure with the referee.

Cejudo, a former Olympic gold medalist wrestler and UFC flyweight champion, announced his retirement from MMA after the bout. But in this sport, as with boxing, retirements often are looked upon with disbelief. Will Cejudo (16-2) return? Was it a negotiating ploy for bigger paydays?

"I really do want to walk away, but money talks," said Cejudo, 33. "It gets stagnant. I want to leave on top."

The empty arena, from a viewing standpoint, wasn't all that unique for avid fans who have seen their share of "Ultimate Fighter" and "Contender Series" bouts. The main difference with UFC 249 is that you already knew all the fighters' names.

But, it did offer fans an enhanced audio experience to hear the sound of every punch, fighters talking to each other and their cornermen and referees conferring with doctors. It also allowed for the fighters to hear what the announcers — each at their own table about 10-12 feet apart — were saying during their fights. Two fighters, heavyweight Greg Hardy and strawweight Carla Esparza, admitted making adjustments based what they overheard.

“Thank God for not having the crowd,” Hardy said after his unanimous decision win over Yorgan de Castro. “Shout out to DC [Daniel Cormier]. I heard him tell me to check [the leg kicks], so I started trying to check 'em. Game changer.”

"He was kind of criticizing me and part of me was like, 'Hey, that's messed up, why are you saying that?'" said Esparza, who won a split decision over Michelle Waterson. "But I was like that's actually a good idea. He was like, 'She's just striking' or 'She's just going for the takedown, she needs to mix it up.' I'm like, 'All right, all right.' I made some adjustments in there. It's crazy, you were definitely able to really hear them in there."

UFC 249 post-fight: Justin GaethjeJustin Gaethje stopped Tony Ferguson in the fifth round to win the interim lightweight title at UFC 249 in Jacksonville, Florida, on May 9, 2020.