But geography being what it is, commuting from there to the Garden City gym that bears his name (and that of longtime trainer Ray Longo) lacked practicality. Eventually, it meant the Baldwin-raised Weidman, a former UFC middleweight champion, would need to find a gym closer to his new home for the bulk of his training for fights.

"I just think you grow when you're put in uncomfortable environments," Weidman told Newsday. "Obviously, Long Island, I was super comfortable. I knew everybody, all the training was at my gym, which was great. But on the other side of the token, I wasn't really making myself uncomfortable that much.

"Having to work out with guys I'm not used to working out with is not the most comfortable feeling. So it definitely made me grow and it got me more excited about the sport."

Weidman found a home at Gym-O, where he said there’s a mix of up-and-coming guys with that "young hunger" and veterans. And he’s about a 90-minute drive from brother-in-law and top-ranked UFC welterweight Stephen "Wonderboy" Thompson’s gym. Longo also spent time in South Carolina with Weidman. Plus, the former champion made two trips back to New York during training camp, including one for the passing of his father-in-law, Vincent Pecora. 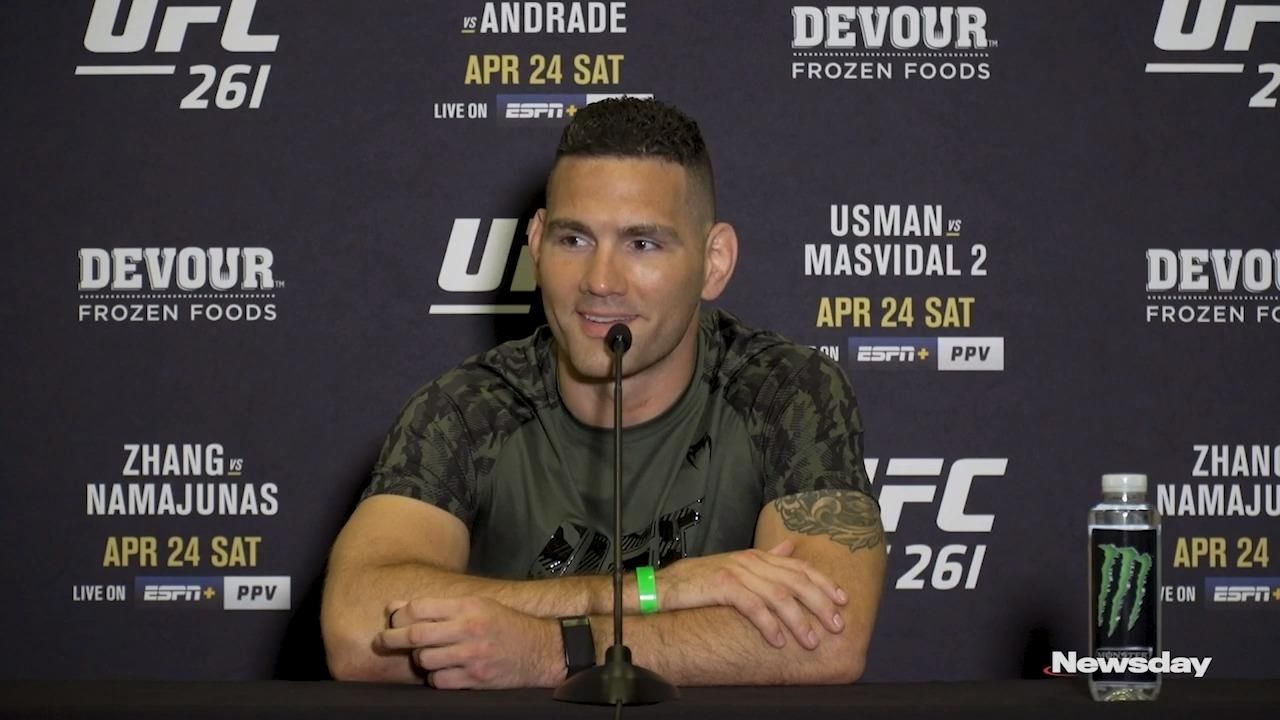 Weidman on the Hall rematch and the old Serra-Longo/Tiger Schulmann rivalry Nearly 11 years since Long Island's Chris Weidman and Queens' Uriah Hall first fought each other on the local scene, they rematch each other at UFC 261 in Florida on Saturday. Weidman talks about that and the rivalry that once existed between his Serra-Longo team and Hall's Tiger Schulmann team. Credit: Newsday

But Weidman made it clear. "I'm still a Serra-Longo guy," he said. "That's my squad."

Longo and Wonderboy will be in Weidman’s corner on Saturday when he makes the walk at UFC 261 to face the Queens-raised Uriah Hall at the VyStar Veterans Memorial Arena in Jacksonville, Florida.

The event, which airs prelims on ESPN and streams the main card on ESPN+ pay-per-view, is the first UFC event to feature an arena full of fans since March 14, 2020. That card in Brazil took place just a couple of days after pro and college sports leagues around the world shut down their seasons as the coronavirus pandemic reached a global outbreak.

"I'm sure it's going to be going nuts, first event back, and it’s over a year," said Weidman, 36. "I'm excited for this, I really am. I’ve never really been that guy that's been like super excited about big events I’m on. I’m like, ‘Ah that’s cool, but whatever, it’s just me and the guy in the cage.’ This time, I'm like really excited to be a part of this event."

Since the pandemic began, Weidman (15-5, 11-5 UFC) has fought once, winning a unanimous decision over Omari Akhmedov to get back into the middleweight rankings.

The ninth-ranked Hall (16-9, 9-7) is on a three-fight win streak, the last two coming after moving to Fortis MMA in Dallas under Sayif Saud. His most recent win was a fourth-round TKO over former middleweight king Anderson Silva on Halloween.

"I'm not going look at his last performance and just use that," said Hall, 36, at Wednesday's media day. "I know his threat. He knows mine. And it's just an opportunity for both of us."

Weidman and Hall were scheduled to fight each other last February, but a bout with COVID-19 forced Weidman to withdraw from that event. Nothing new there for Hall, who saw two scheduled bouts in 2020 get canceled for one reason or another.

UFC 261 Countdown: Weidman vs. Hall The Baldwin-raised Chris Weidman and the Queens-raised Uriah Hall, the top two UFC middleweights from New York, face each other at UFC 261 in a rematch from 11 years ago.

The two New York-bred middleweights fought once before, in 2010 in the Ring of Combat. Hall was the champion until Weidman knocked him out.

That matchup offers no realistic experiential data for either of the two to draw on. That was almost 11 years ago, way before the mainstream MMA audience even heard of either guy. But it’s a talking point to help build a narrative to promote the bout.

"I just think it makes the story cool," Weidman said. "Like, wow, what's the chances that two guys who fought 11 years ago are still in the UFC and at the top of the top of the game after all these years? And we both have had completely different stories for our careers. So it's pretty cool."

Hall stayed more in the present but still gave a nostalgic nod.

"He's in my way to get to where I need to be," Hall said. "I was looking for someone else. They gave me him, so I had to switch my mindset. A win over him would be a little more satisfying because he was the first guy to give me my scar."

No more cutting corners in training for UFC's WeidmanFormer UFC middleweight champion Chris Weidman said he stopped cutting corners in his training and ... UFC 261 fight card: 3 titles on the lineEvent: UFC 261 Date: Saturday, April 24, 2021 Location: Jacksonville, Florida Venue: VyStar Veterans Memorial ... Hall wants Adesanya but knows he has to play the game firstIf the right work in the cage leads to the right promo which then leads to the right response from the champion, then anything is possible.