Merab Dvalishvili of Georgia poses on the scale during the UFC 252 weigh-in at UFC APEX on August 14, 2020 in Las Vegas. Credit: Zuffa/LLC via Getty Images/Jeff Bottari

Here comes the opportunity Merab Dvalishvili kept asking for every time a microphone was placed in front of his face and questions were asked of him.

Top-ranked opponent. Big name. Chance to test himself against the best bantamweights the UFC has to offer as he climbs the ladder in the 135-pound division.

Dvalishvili, a Serra-Longo fighter who lives in Bellmore, will face Marlon Moraes in the featured prelim bout at UFC 266 in Las Vegas on Saturday night.

"I have a healthy respect for Marlon Moraes. He was a World Series of Fighting champion, and in UFC, he was No. 1 for a long time," Dvalishvili said. "He throws hard, power in kicking and punching." 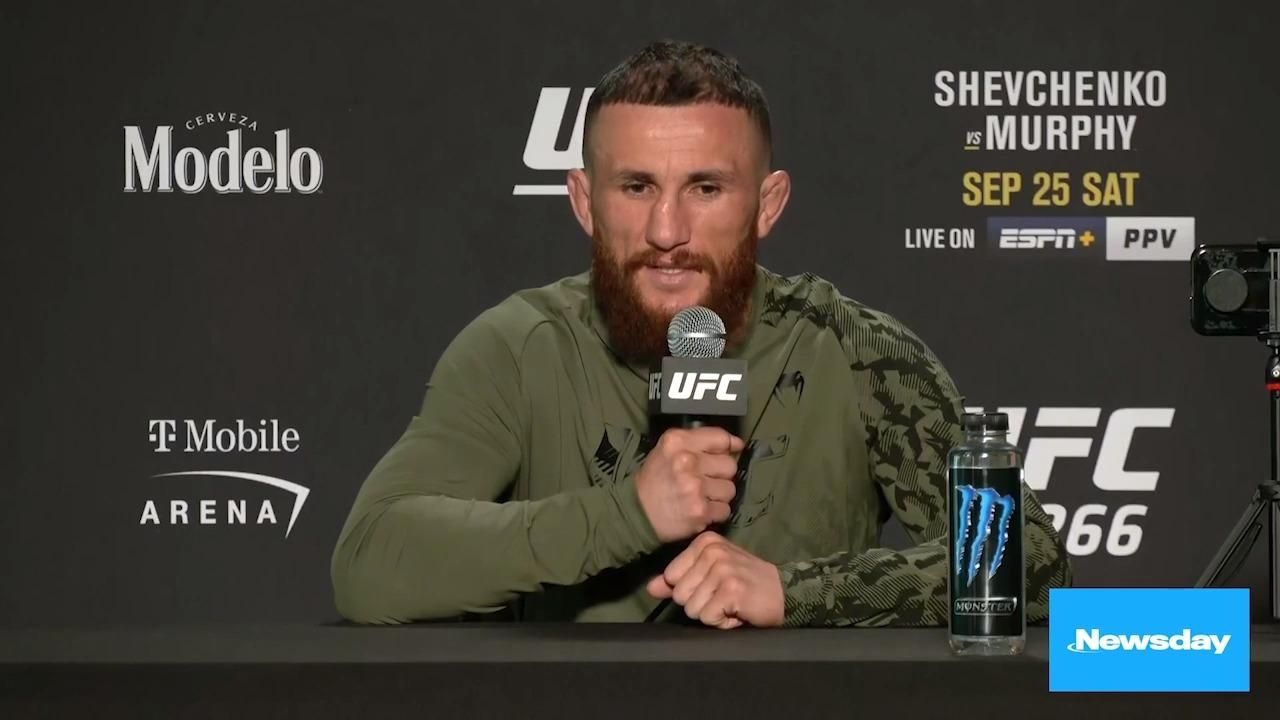 UFC 266: Dvalishvili explains why he loves takedowns so much Merab Dvalishvili and Marlon Moraes discuss their upcoming bout during UFC 266 media day on Sept. 22, 2021, in Las Vegas. Credit: Newsday

The 11th-ranked Dvalishvili (13-4), from the Republic of Georgia, showcased his ever-improving striking his last two fights with unanimous-decision victories over Cody Stamann and John Dodson.

But when the subject of Merab Dvalishvili comes up in discussions among those who follow mixed martial arts, two other things quickly rocket to the forefront: his takedowns and his pace.

In his eight UFC fights (six wins, two questionable decision losses), Dvalishvili has 59 takedowns, tops in the division’s history in the promotion. His 13 takedowns of Gustavo Lopez in June 2020 were the most in a single fight in UFC bantamweight history. Of course, he broke his own record of 12 set in his previous fight four months earlier.

"When you take somebody down, and you’re on top, when you hug or even when you punch, it looks you’re winning it," Dvalishvili said. "That’s why I like to make sure I’m winning. The strike exchanges, sometimes looks weird, like maybe I think I’m winning, but . . . "

But, as the saying goes in MMA, don’t leave it in the judges’ hands to decide.

Dvalishvili has the conditioning to go the full 15 minutes without getting tired. All eight of his UFC fights have gone the distance. It’s how he earned his nickname "The Machine" from teammates in the gym who have worked with him, a group that includes current UFC bantamweight champion Aljamain Sterling and UFC lightweight Al Iaquinta. Dvalishvili’s pace can be relentless, both on the feet and on the ground.

The sixth-ranked Moraes (23-8-1) possesses a level of power in his striking that few 135-pounders can match. But he has struggled a bit record-wise since joining the UFC in 2017. He’s 5-4, including two straight losses by TKO to Rob Font and Cory Sandhagen.

"It’s a fight, and even though he lost his last two, I still have so much respect, and it’s not going to be easy for me. I’m just going to be focused from the first second to the last second," Dvalishvili said. "When I say first second to last second, I want to make sure I’m the leader, I’m dominating, I’m the guy who puts pressure on his opponent."

Dvalishvili kicks off a busy seven-week run for the Serra-Longo fight team. CFFC flyweight champion Phumi Nkuta defends his title on Oct. 2. Dylan Mantello, Dennis Buzukja and James Gonzalez compete at Ring of Combat on Oct. 22. Then, Sterling defends his title for the first time against Petr Yan at UFC 267 on Oct. 27 in Abu Dhabi, and Iaquinta returns to the octagon against Bobby Green on Nov. 6 for UFC 268 at Madison Square Garden. Nearly a dozen other up-and-coming fighters have bouts along the way as well.

"We’re getting better and better as a team. We’re together and we always help and support each other," Dvalishvili said. "I’m just enjoying training and helping my teammates and see how successful they are. After my fight, I want to quickly come back and help Aljo and my other teammates."

But first, Dvalishvili must tend to his own business in the UFC’s bantamweight division.

"He earned his right for this fight. It’s a huge fight for him. Even though he’s 6-2, I think he’s 8-0," trainer Ray Longo said. "He’s right where he wants to be. This is going to be a good benchmark for him to see where he’s at."