Al Iaquinta has been on the outside for more than 2 years recovering from mutlple injuries. He last fought on Oct. 5, 2019, losing by unanimous decision. Credit: Yeong-Ung Yang

That’s how much time will have passed between Al Iaquinta's last fight and when he steps into the octagon at Madison Square Garden to face Bobby Green at UFC 268 on Nov. 6. That length of inactivity doesn't quite mesh with the fighting spirit of "Raging Al."

"I missed it, to the point of, like, depression almost," the 34-year-old Iaquinta said. "It's one thing if I just wasn't fighting, but then also to be in pain every second of every day. A workout is supposed to make you stronger and better. To work out and have it make you hurt more, get more discouraged. That’ll put your mind in a bad place." 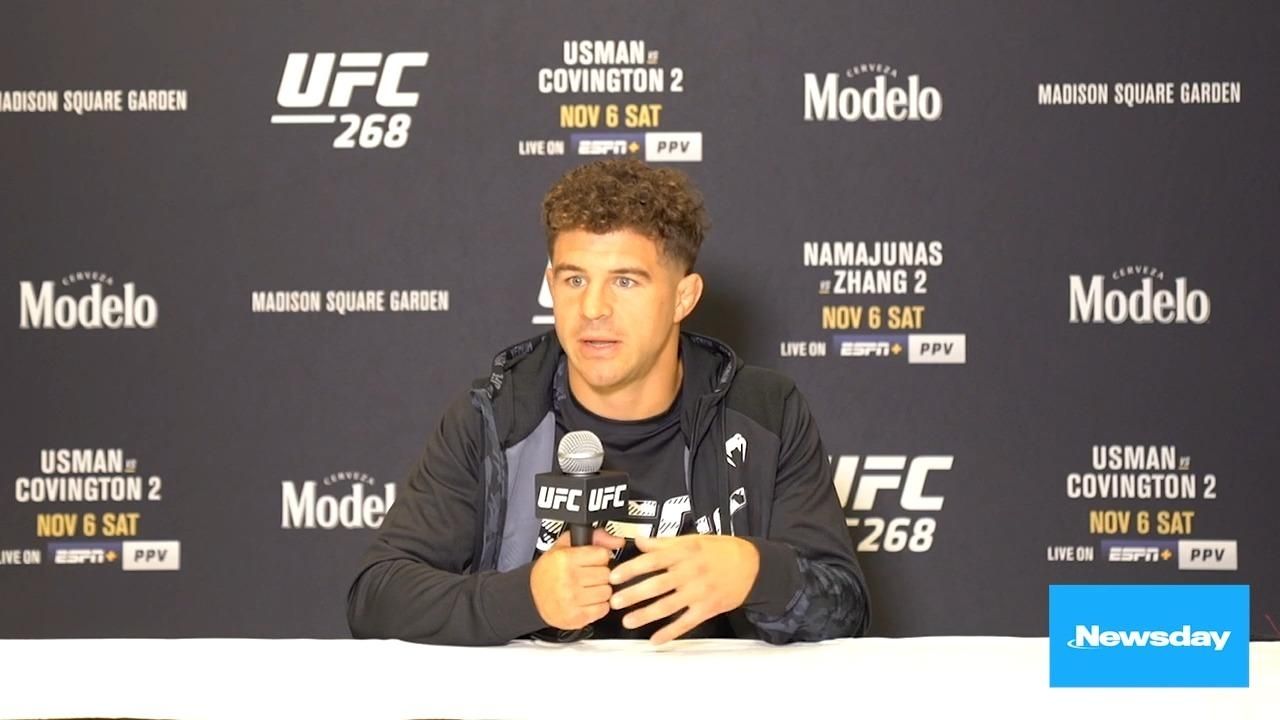 Iaquinta on his UFC return: 'This is who I am. I'm a fighter at heart.' Wantagh's Al Iaquinta talks about why he wanted to return after two years away dealing with injuries at UFC 268 media day on Nov. 3, 2021. Credit: Newsday

The body does what it does, and the sport of mixed martial arts makes no bones about altering its participants’ bones. And ligaments. And tendons. And flesh.

For the better part of these last two years, Wantagh's Iaquinta has battled through injuries and medical procedures, cornered his teammates through some of their biggest and toughest moments and been in more physical therapy sessions than he can — or wants — to count.

"At this point, I should be a physical therapist myself," Iaquinta said. "I think I can do knee surgeries. Get my scalpel."

Iaquinta last fought on Oct. 5, 2019, losing by unanimous decision to Dan Hooker. At the time, Iaquinta was ranked sixth in the UFC’s lightweight division and Hooker 15th. Five months earlier, Iaquinta (14-6-1) lost a five-round decision to Donald Cerrone. His last win came against Kevin Lee on Dec. 15, 2018. Greene (27-12-1) also has last two straight, most recently in August against Rafael Fiziev.

Iaquinta, a Serra-Longo fighter, said he’s planning to return to a more active fighting schedule, as long as his body holds up.

"That’s where I feel the most normal. Everything feels like it's supposed to be," Iaquinta said. "Waking up, coming to the gym, in the gym and helping the younger guys and training myself, giving an example for people to look up to. And also setting goals for myself every day, there’s like a reason to wake up. The last two years before that, I was trying to rehab so I could fight but also sell real estate. Real estate's definitely a passion of mine. But when I see all my teammates setting goals and achieving them, it's super frustrating. But it's motivating."

Iaquinta (14-6-1) said he started feeling "decent" this past summer. Then a little bit of news popped up that caught his eye.

"They announced that they were doing MSG, started sparring a little bit. I was like, Well, I'm feeling all right, you know," Iaquinta said.

Soon after, the call came offering Iaquinta a double shot of motivational espresso: the chance to fight at Madison Square Garden and against Green, a 35-year-old from California. Both were opportunities Iaquinta had presented to him before.

Iaquinta and Green were scheduled to fight each other in July 2015, but Green withdrew because of an injury. Green was replaced by Gilbert Melendez, who was suspended a week before the fight after testing positive for PEDs. Iaquinta was pulled from the card and didn't fight again until April 2017. He was going to fight Thiago Alves at UFC 205 at MSG in November 2016 but that bout was scrapped after Iaquinta’s contract dispute.

All that was so 2010s. It’s 2021, now. The UFC is back on the road, albeit in a limited barnstorming role compared with pre-pandemic standards, and headed to New York for the 13th time since the sport was legalized here in 2016. Iaquinta said he’s feeling as good as he’s felt in a while.

"This is all I’ve wanted for the last couple of years," Iaquinta said. "Perfect place, perfect time for me to put on a performance and get back in the talks."

Nets' James Harden: 'I've got my swagger back'
It's a whole new ballgame when it comes to getting into Hall
Rangers' Georgiev leads off in goal in first half of back-to-back
Islanders legend Clark Gillies dies at 67
Rangers fall behind early, can't catch up against Hurricanes
Islanders beat Coyotes for third straight win at UBS
Didn’t find what you were looking for?