A fighter's last hurrah: Gian Villante to wrap up career at UFC 268

Gian Villante walked into his new home in Levittown and hung on the banister his drawstring bag, the contents of which contained key ingredients to his new life.

He hugged his fiancée, Katie, checked in with their 22-month-old son, Gianluca, and tended to their two-week-old daughter, Joey. Throw in a few pets of the family dog, Murphy, to complete this portrait of family life.

Soon afterward, Villante would grab his MMA fighter bag, packed with the tools of his trade for the past 12 years and for which he will need just one more time this Saturday, and head to Bellmore Kickboxing MMA for one of his final training sessions ahead of his heavyweight fight against Chris Barnett at UFC 268. It was his first fight at Madison Square Garden. It was his last fight in the cage.

"Too much of this stuff, man," the 36-year-old Villante told Newsday recently. "I've been in the UFC for almost 10 years now. So I mean, that's long enough. And that's more than most guys so I'm proud of myself. I lasted that long, but you know, it takes a toll." 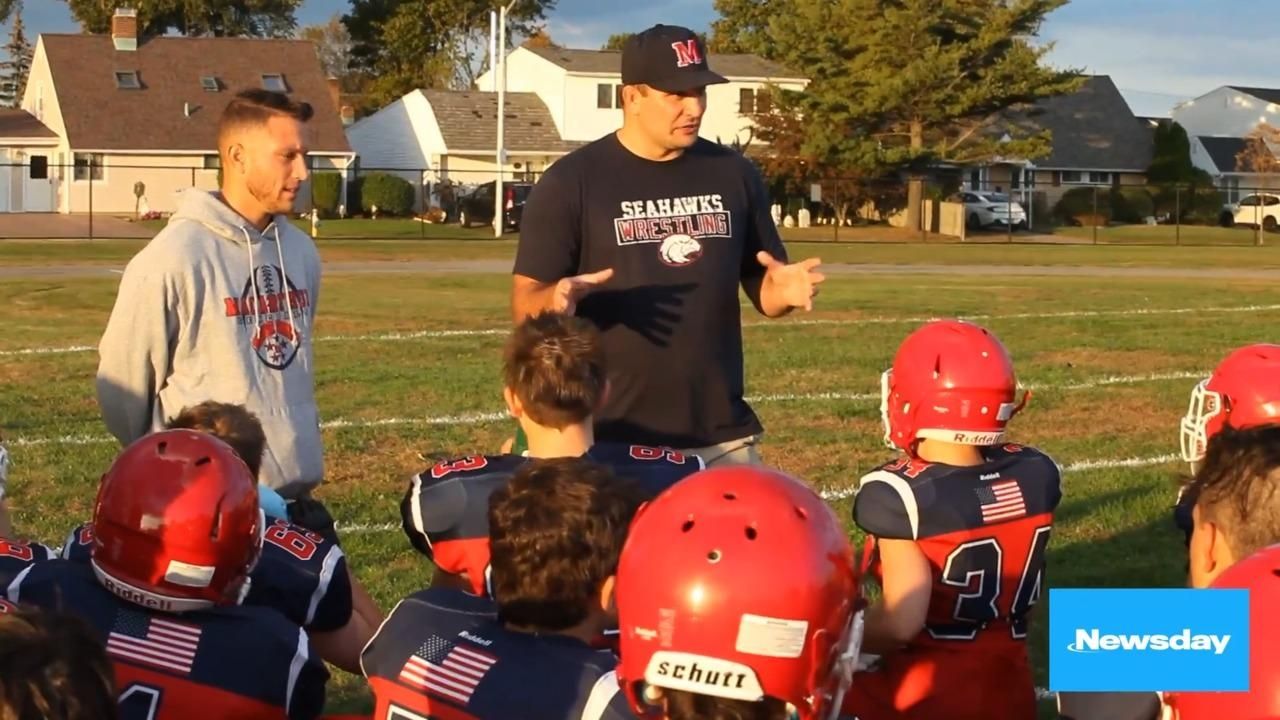 The last walk: Gian Villante to end MMA career at UFC 268 Levittown's Gian Villante has been an MMA fighter for more than 10 years. His heavyweight fight against Chris Barnett at UFC 268 at Madison Square Garden on Nov. 6, 2021, will be his last fight. Credit: Newsday / Mark La Monica, Reece T. Williams

Villante dictated the pace in the first round with his pushkicks, and avoided Barnett's spinning kicks. But in the second round, Barnett landed a spinning wheel kick that dropped VIllante. Barnett then moved in and threw punches until referee Dan Miragliotta stopped the bout midway through the second round.

"He's got the head of a cinderblock," Barnett said about Villante.

Villante, who trained under Keith Trimble at Bellmore Kickboxing MMA for his entire career, debuted in the UFC on April 27, 2013, losing a technical majority decision after an eye poke against Ovince St. Preux at UFC 159 in New Jersey. Four of his five Strikeforce bouts before that took place under then-UFC parent company Zuffa LLC’s banner.

"I've lasted a long time, been able to stay in their good graces by taking a lot of punches and being entertaining when I go in there," said Villante, winner of three Fight of the Night bonuses in his career. "I could go and wrestle guys and lay on them and be a boring fighter, but that's not who I am. I like to go out there and slug and have fun and that in turn has given me a 10-year career where I thrived, made a little bit of decent money here, enjoyed myself a lot and enjoyed the whole ride every second of the way."

Villante entered UFC 268 ranked sixth in UFC light heavyweight history in significant strikes landed with 741. His 84.5% takedown defense ranked fifth in the division, which helps explains why his 1 minute, 20 seconds of bottom position time is eighth-best at light heavyweight.

His decade in the UFC has taken Villante (17-14, 7-11 UFC) around the world, from Brazil to Australia to the Czech Republic to New Zealand to cooking with celebrity chef Lidia Bastianich to guest bartending on a Bravo TV talk show. Not too bad for a kid from Levittown.

That career — along with two previous years in the regional MMA circuit where he won the Ring of Combat heavyweight and light heavyweight titles plus playing football and wrestling in high school and college — has left Villante in some physical pain. Not debilitating, but definitely more than just the typical "getting old" stuff.

Still, he wouldn’t change a thing.

"I don't really walk down stairs too great anymore. The body's taken a beating, man," Villante said. "Between football, and this, and wrestling, it's taken a pretty good beating. But I've enjoyed it. I wouldn't give it back. I'll take this pain for what was given to me."

Gian Villante has spent nearly a decade fighting in the UFC, something not every fighter in the promotion can boast.

His post-fighting career was something he always thought about, and his plan began to take hold earlier this year. Villante returned to Hofstra to earn the remaining credits he needs to earn his bachelor’s degree in physical education.

"I’m going to graduate Hofstra in June and become a teacher and work with kids," Villante said. "People might say, you know, UFC or NFL or whatever is a dream job. Being a teacher and being able to work with kids every day and go to school in sweats — that's the dream job to me."

In between training for this fight, and taking three classes at Hofstra, and moving into a new house, and having a newborn, and raising a toddler alongside his fiancée, Villante also coaches the eighth-grade football team at Jonas E. Salk Middle School and assists with the junior varsity and varsity football teams at MacArthur High School, where he won Newsday's Thorp Award as the best football player in Nassau and was a state champion in wrestling.

But on that football field, watching his players improve week to week and enjoy the sport he grew up playing and loving, there’s no sign of Villante feeling overwhelmed by the complexities of transitioning into a new career.

"Being back there and coaching with these kids, I didn't realize how much I loved and missed football," Villante said. "I'm having so much fun. It’s the best thing in the world. I’m head-butting guys before games, it's great. I'm loving it. And the relationships you build with the kids? Man, I can't tell you. I have so many kids and I'm like, 'Man, I want to hang out with them.' They’re like the coolest kids in the world."

Did he leave his gloves in the cage at MSG after his fight, a popular and symbolic gesture among MMA fighters as they depart their field of play for the final time?

"I'm not a show guy. I don't need the attention," Villante said. "I don't want to be popular. I don't care how many Instagram followers I have. My social media consists of my kids and eighth-grade football. I like living in a little bit of silence."

Even with the Knicks down 30, no playing time for Kemba
What you need to know about Jets-Eagles
Lennon: Winners, losers of pre-lockout free agency
Mets see newest players as positives for clubhouse culture
Nets taking back-to-back game against tough Bulls as challenge
Knicks fall behind by 30 in 14-point loss to Nuggets
Didn’t find what you were looking for?