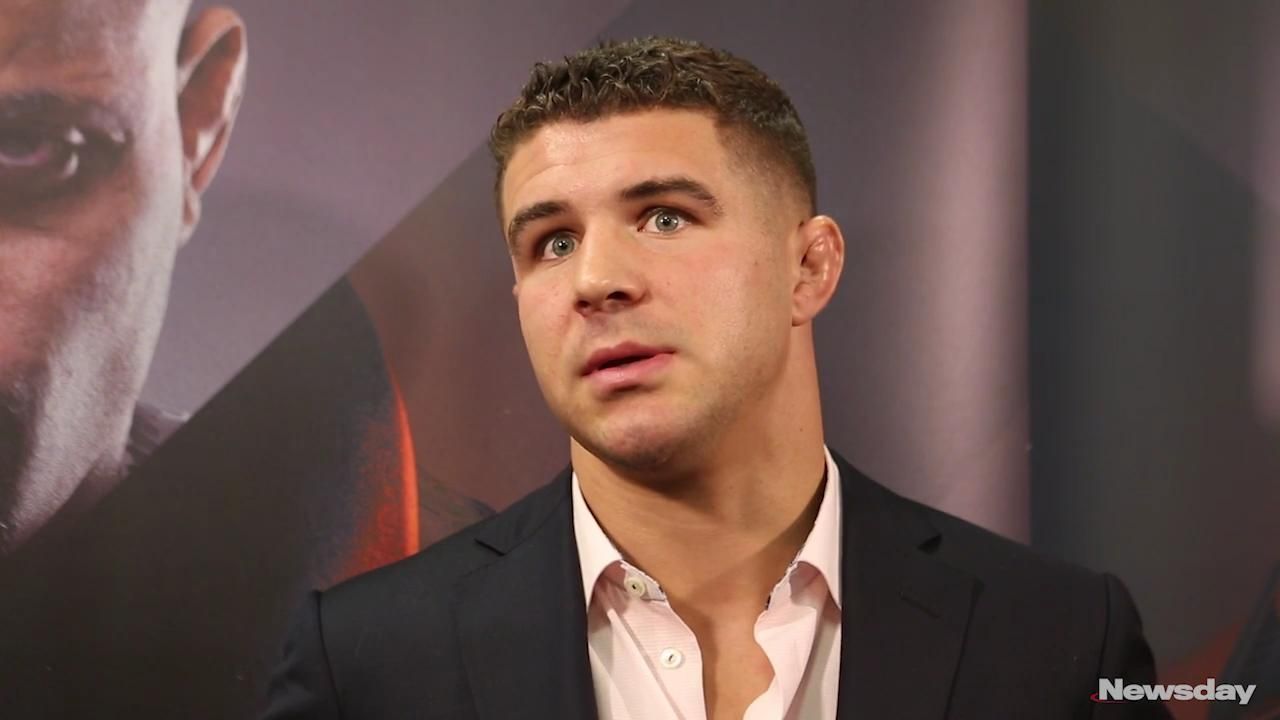 Wantagh's Al Iaquinta spoke with the media at UFC 230 at Madison Square Garden on Nov. 3, 2018, about his fight next month against Kevin Lee. Credit: Newsday / Mario Gonzalez

Al Iaquinta will turn down a fight if it doesn’t suit his needs at the time.

He also isn’t afraid to accept the challenge of facing an undefeated mauler of men on a day’s notice.

The Wantagh-raised Iaquinta also doesn’t mind verbally sparring with his bosses, either directly in person or indirectly through interviews and social media, and he certainly speaks up for what he believes is right in terms of fighter pay and physical health.

So, is there anything Iaquinta, a guy who sells real estate on Long Island when he’s not putting fists to faces, is afraid of?

This is a 31-year-old fighter who lobbied for a chance to face Khabib Nurmagomedov for the lightweight title last April on 30 hours’ notice having trained only for a three-round fight against another striker in Paul Felder rather than a five-round fight against one of the best pound-for-pound fighters in MMA. Iaquinta lost to Nurmagomedov rather handily, but he earned the respect of his peers, fans and bosses that night in Brooklyn.

“I’m pretty good at throwing myself into uncomfortable situations,” Iaquinta said. "I accept the task and then figure out a way to overcome it. I’m not scared to dig myself into a ditch and try to find a way out.”

His next task comes Saturday against Kevin Lee, the No. 4 ranked lightweight, at UFC Milwaukee. It is the main event on the UFC’s last fight night on Fox before ESPN becomes the promotion’s broadcast partner in 2019.

This fight is a rematch from February 2014 when Iaquinta was beginning to rise and Lee was making his UFC debut. Iaquinta was seconds away from being choked out by Lee, but he managed to fend it off and come back to win by unanimous decision.

Since then, Lee’s star has risen. Lee (17-3, 10-3 UFC) won nine of his next 10 bouts and talked his way into an interim lightweight title fight against Tony Ferguson in 2017. He lost that bout but returned in April 2018 with a TKO win over Edson Barboza.

Iaquinta, the No. 8 lightweight in the UFC, and Lee have had their back and forth moments. Not so much lately, though, but as fight week goes on and they’re asked questions, and Iaquinta both figure to make a headline or two.

“He was trying to get the fight with me when I was winning,” Iaquinta said. “I had my breaks and my time away. He climbed up the ladder and felt like he didn’t want anything to do with me after that. But now that I fought Khabib, I think he sees value in that and he also can get a little redemption over a guy who beat him. I think he’s focused for the fight, as I am. So the talking stops. The talking will be done in the ring.”

That fight against Nurmagomedov changed more than just Lee’s outlook. Fans found a new appreciation for Iaquinta (13-4-1, 8-3), already something of a fan favorite for his care-free approach, especially with the UFC brass. Even UFC president Dana White, often the target of Iaquinta’s animosity, came away impressed with him after that fight.

More importantly, that five-round display of heart changed Iaquinta. When he first got into the sport, he had the same mentality as every other fighter: fight your way to the top. As the years went on, and injuries and the realities of the sport piled up, Iaquinta looked at his career one fight at a time, and the time in between could be as long as he wanted it to be. There were times when he figured he’d never fight again, that he was retired from his sport before age 30.

“That fight,” Iaquinta said, “to be able to hang in there, shows me right where I’m at. It put me up there with the fans. I think the UFC appreciates me a lot more. They’ve shown a lot more belief in me.  That got me re-focused and motivated again.”

They made him the main event -- this time by design, not a crazy confluence of happenstance even by MMA standards. He’s on network television -- on the station where he once cursed out the fans on live television after winning a fight.

It all fits nicely into Iaquinta’s decision to take this fight.

“There are so many things that go into a fight. My physical health, my mental health, whether I feel like I’m being appreciated enough -- if the pay is matching the task at hand,” Iaquinta said. “The timing of the fight, really just everything. Everything has to be balanced. So, this one’s balanced. The opponent is a top-ranked opponent. It’s a main event, on a big card. I’ve had enough time since my last fight, I’m healed. I’m mentally in a good spot.”

Al Iaquinta, the fighter and the real estate agent

When Wantagh's Al Iaquinta isn't training for an upcoming UFC fight, he's selling real estate on Long Island. Take a tour through the two worlds of "Raging" Al Iaquinta as he prepares to face Paul Felder at UFC 223 at Barclays Center on April 7, 2018.

Montgomery does the job again as Yankees top Rangers
Mets' loss to Red Sox only significant to Yankees
Rieber: After 707 days, Severino is all the way back
Rieber: Yankees need to win now, by any means necessary
GM Marks grooming Nets as favorites to claim NBA title
Red Sox series gives Mets a taste of designated hitter rule
Didn’t find what you were looking for?