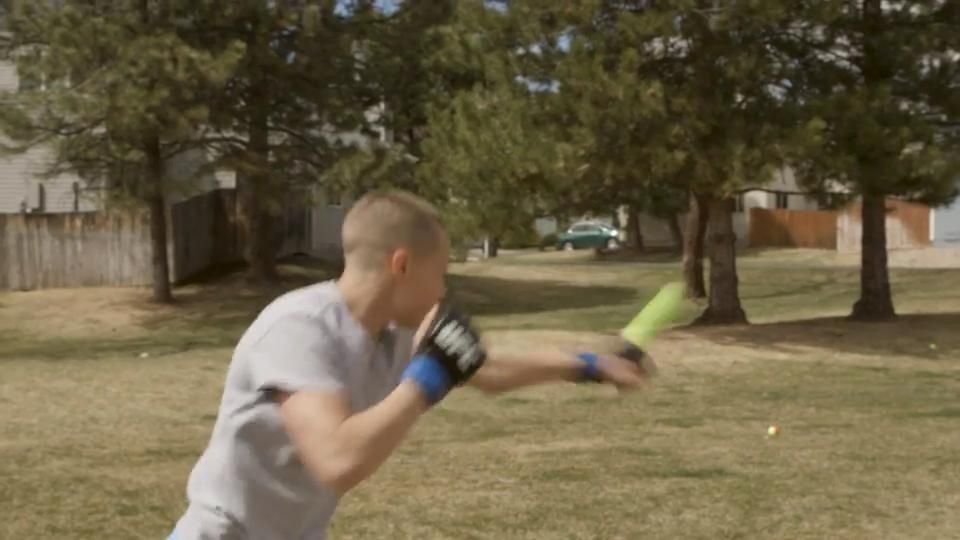 In the clip from the UFC 223 "Embedded" series from April 2018, strawweight champion Rose Namajunas punches tennis balls during a drill she and her coach/fiance Pat Barry came up with one day during training for her first title defense against Joanna Jedrzejczyk. Namajunas won the fight on April 7 at Barclays Center in Brooklyn by unanimous decision. Credit: UFC

Rose Namajunas put on a show of punching prowess last month. And that was well before she got into the cage to defend her strawweight title against Joanna Jedrzejczyk at UFC 223 in Brooklyn.

In the second episode of UFC’s “Embedded,” a web series that chronicles the lives of the top fighters before and during fight week, Namajunas and coach/fiance Pat Barry were shown doing a drill with tennis balls.

Barry threw them. Namajunas punched them.

Namajunas did the drill at least 20 times during camp, she said Tuesday after her interview on stage at The Wall Street Journal’s Future of Everything Festival. At first, the tennis balls were thrown softly and underhand.

“By the time we got to that video being filmed, it was all just fast pitches from Pat,” Namajunas said. “We got really good at it.”

Barry said at UFC 223 media day last month that it was something they came up with one day while just sitting around. He figured it couldn’t hurt to try.

It certainly was a unique training exercise. But did it help her at all in her fight against Jedrzejczyk?

“A lot of my punches came out a lot more natural,” said Namajunas, who won by unanimous decision. “The combos were coming out more, I wasn’t thinking about it much. I think I was throwing more combos and I think that’s what helped it.”

According to Fight Metric, Namajunas landed 108 of 304 strikes in the fight, the most of any of her UFC fights, and landed 35 percent of her strikes, In her only other five-round fight, against Paige VanZant in 2015, Namajunas connected with 104 of 158 strikes (66 percent).

One notable difference, when comparing Namajunas’ two five-round bouts, is in striking rate from a distance. Namajunas connected with a 100 percent strike rate from a distance against Jedrzejczyk but just 47 percent against VanZant, who she submitted at the 2:25 mark of the fifth round.

“With the ball drill, you’re training yourself not to hold your breath,” Namajunas said. “Just think about landing the punch, because they’re constantly coming out, you have to control your heart rate and not get too excited about it, because it is a fun drill.”