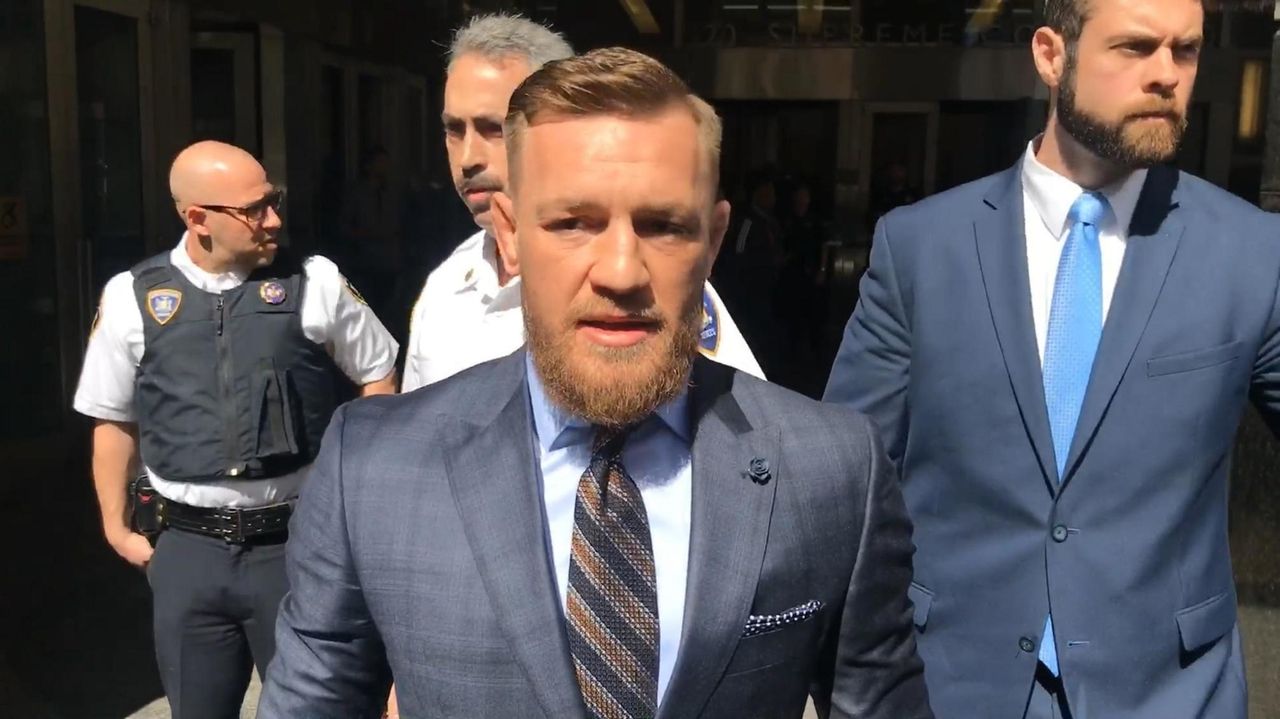 UFC star Conor McGregor appeared Thursday morning in a Brooklyn courtroom, where a prosecutor said “there are plea negotiations” to resolve criminal charges connected to the fighter’s involvement in a Barclays Center melee in April.

In proceedings that lasted about a minute, Judge Raymond Rodriguez said the case against McGregor and co-defendant and teammate Cian Cowley would be back in court July 26. The judge also renewed orders of protection issued after McGregor allegedly slugged Jason Ledbetter. McGregor, who is also accused of hurling a hand truck at a bus of UFC fighters during the April 5 ruckus in the loading dock of Barclays Center, fled the scene.

Following Thursday’s hearing, McGregor pushed past reporters and cameras on Adams Street to recite a statement prepared with his lawyer’s publicist: “I regret my actions that led me here today. I understand the seriousness of this matter, and I’m hopeful that it gets resolved soon.”

McGregor and Cowley, who also was charged in the April ruckus, wore suits and ties to Thursday’s hearing, where prosecutor Janet Gleeson told Rodriguez that plea negotiations were pending.

Within a day of the melee, McGregor was arraigned on two felony charges and 10 misdemeanor charges related to behavior captured on video and aimed at Khabib Nurmagomedov after the UFC 223 media day on April 5.

— three counts of menacing in the third degree

— two counts of menacing in the second degree (weapon)

— one count of attempted assault with intent to cause physical injury

— one count of reckless endangerment in the second degree

— one count of criminal mischief with intent to damage property

McGregor, 29, was released from police custody on Friday, April 6, after posting $50,000 bond at state Supreme Court in Brooklyn. Cowley, a 25-year-old fighter who trains with McGregor, also was charged with one count of assault and one count of criminal mischief for his alleged role in the incident, police said. He was released on $25,000 bond.

Multiple videos appeared on social media within hours of the incident, and more surfaced in the days that followed. One showed McGregor throwing a metal hand cart through a bus window, shattering the glass. Another showed him lifting a metal barricade and charging the bus. Another showed McGregor and his entourage leaving Barclays Center in a black SUV after the incident.

The bus contained numerous fighters who were scheduled to appear on the UFC 223 card two days later. McGregor’s actions caused three bouts on the card to be canceled.

Michael Chiesa suffered cuts to his face and was forced to cancel his lightweight bout with Anthony Pettis. Ray Borg’s flyweight bout also was canceled because he suffered multiple corneal abrasions.