A look at the construction of Flash Forum on UFC Fight Island on Yas Island in Abu Dhabi, United Arab Emirates, ahead of a run of four fight events there from July 11 through July 25, 2020. Credit: Zuffa LLC

Those words: “I have a private island that I’ve secured.”

And thus gave rise to UFC’s “Fight Island,” where the mixed martial arts promotion planned to host events for its international fighters amid the global coronavirus pandemic that shut down sports and much of everything else in mid-March.

The concept generated buzz, put the meme world into overdrive and gave quarantined fans something to look forward to amid rising health concerns, increasing unemployment and a slowed economy.

Now, Fight Island has arrived, on Yas Island in Abu Dhabi, United Arab Emirates, with the first of four events over the next two weeks set for this Saturday.

“Dana has come up with a lot of great ideas over the years. I mean, I put Fight Island right at the top of that list,” UFC chief operating officer Lawrence Epstein said. “The idea that Dana came up with to sort of do these events was primarily focused on getting fights for those athletes that just can't get to the U.S. One of the great ideas from a marketing standpoint, and from building excitement, and it's just been incredible.”

UFC 251, featuring three title fights and streaming on ESPN+ pay-per-view, will take place in Flash Forum, a structure rebuilt and adapted for these events. The next three fights are scheduled for July 15, July 18 and July 25.

“We've got a lot of fighters that are located outside the United States that we've got a contractual obligation to,” Epstein said. “Of course, we want to get them fights and so we're doing everything we can to do that. And that means, figuring out a way to put on some events outside the United States, and of course, in an area that’s safe, and that we can execute on a proper health safety and operational program.”

The events will not include fans, meaning no live gate revenue. UFC 112 in Abu Dhabi brought in $3.5 million in ticket sales, and a fight night in 2014 totaled $1.8 million. No live gate was announced for UFC 242 last September, headlined by lightweight champion and international star Khabib Nurmagomedov of Dagestan. Epstein, while not offering a specific number or breakdown, said the UFC and its partners in Abu Dhabi are sharing the costs of construction and preparation for Fight Island. 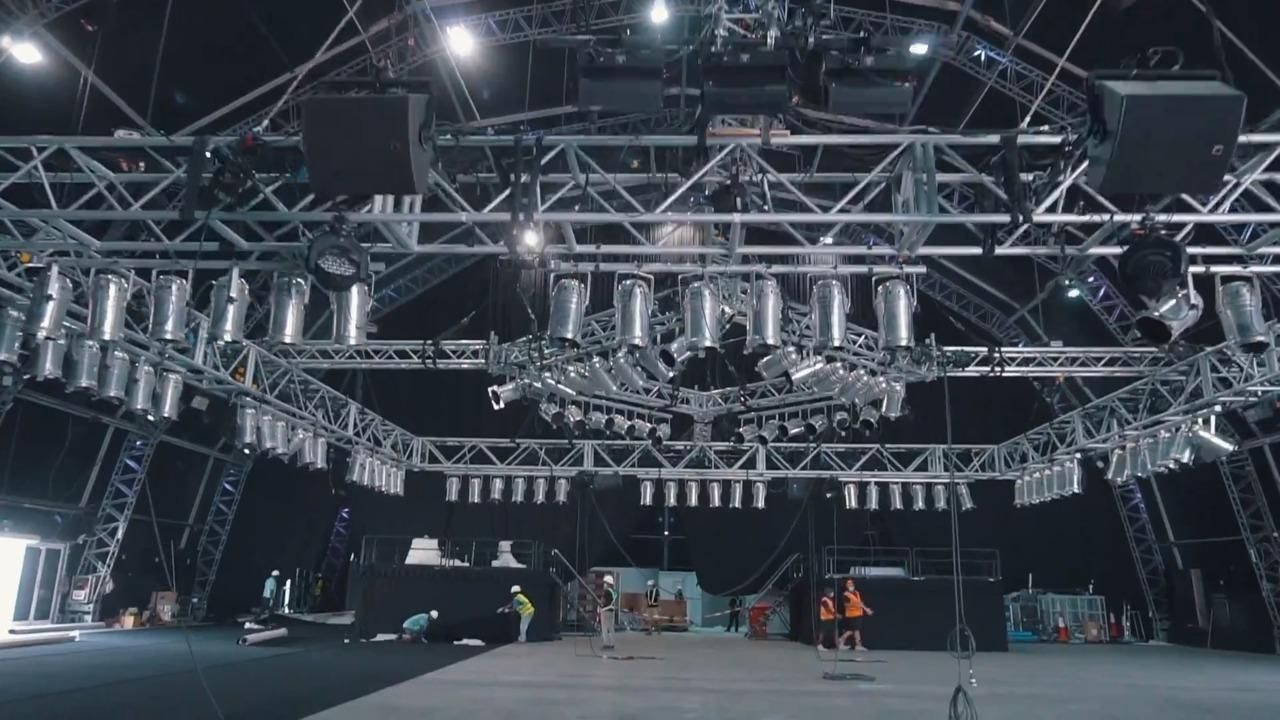 The building of UFC Fight Island A look at the construction surrounding UFC Fight Island on Yas Island in Abu Dhabi, United Arab Emirates, ahead of a run of four fight events there in July 2020. Credit: Zuffa LLC

When the Fight Island events are completed on July 25, that will make 20 UFC events so far this year. Epstein said that puts the company about one event behind where they originally were scheduled to be at this point. The UFC is contracted to deliver 42 events to ESPN, which owns both linear and digital broadcast rights.

Yas Island is a man-made island and a major tourism destination for Abu Dhabi. The infrastructure in terms of hotels and dining establishments already exist, as does beachfront, driving experiences and a golf course, to name a few.  The set-up there, which the UFC is familiar with from having hosted three events there (Abu Dhabi-based Flash Entertainment was a 10% stakeholder in the UFC from 2010 to 2018), allowed for the promotion to establish a “safe zone” or “bubble” for the fighters and their teams, UFC staff and production, the workers at the hotels and businesses and other personnel. The UFC estimates a population of 2,500 for the Fight Island safe zone throughout the course of the four events.

“It's certainly the most unique [event] we've ever done,” Epstein said. “Yeah, we're doing four fights in essentially two weeks. But, just the logistics of traveling people from all over the world to Abu Dhabi. The intense medical screening and testing that everybody has to participate in, the level of quarantine that people are going to do and then sort of the very strict borders of this quarantine zone. I mean, you're not allowed to leave. When you leave, you're going home or you're going somewhere else because you're not coming back in.”

Each person traveling to Fight Island will be tested multiple times, the first being before being allowed on a charter flight from one of four hub cities (Las Vegas, Sao Paolo, London, Moscow) to Abu Dhabi. If a fighter tests positive at the hub city, they are not allowed on the flight and they’re no longer able to compete. Gilbert Burns tested positive for COVID-19 in Las Vegas last Thursday, thereby losing his shot at the welterweight title. Kamaru Usman will now defend his title against Jorge Masvidal.

People are then tested twice after landing in Abu Dhabi and arriving at their hotel, plus another test prior to the fight and then a post-event test before leaving the bubble. After each test, the person is quarantined until the results come back. There also will be nightly temperature screenings. Face coverings must be worn in public at all times and proper social distancing guidelines will be enforced. The UFC estimates a total of 3,300 COVID-19 antigen tests for its athletes and personnel.

“Initially it was sort of the mindset of ‘Where do we find a place that's safe, that we can do what we need to do and we can bring athletes from around the world?’” Epstein said. “And very quickly, we sort of zeroed in on Abu Dhabi, because one of the big problems that we have right now is just immigration-related stuff. Yes, we've been able to do eight events in the United States. But that doesn't mean we're able to get athletes that are located outside the U.S. into the U.S. to participate in those events. We've had a few, but it's challenging.”

The UFC first returned with three fight cards in May in Jacksonville, Florida, then hosted five events at its Apex facility in Las Vegas. With each event, their health and safety protocols were tweaked as needed.

“We have a saying that the plan is written in pencil, which means we have the mindset of constantly changing it and making it better,” Epstein said.

Epstein said that for the five events in Vegas, the UFC conducted approximately 2,500 COVID-19 antigen tests and had a 0.4% positivity rate (11 positive cases).

“That says two things. Number one, the procedures and policies that we have in and around our events are working. People are not getting exposed at those events. I wouldn't say it's easy, but that's certainly easier because we have a controlled environment,” Epstein said. “What this also says is, is that our staff and our fighters are listening to the education that we're giving them regarding how to be safe. They're practicing social distancing. They’re practicing the wearing of PPE and they’re overall trying to be as safe as possible because it's not just what you do in and around those events. It's what you do in between those events that can make all the difference.”

The UFC doesn’t have any specific or immediate plans to bring Fight Island back to Abu Dhabi, it’s “very possible” they could do it again, Epstein said.

“Part of this is sort of the unknown about when the world is going to start getting back to normal,” Epstein said. “I hope it happens sooner rather than later. But if things continue the way they are right now, there's no doubt we’ll have future opportunities to do Fight Island events in Abu Dhabi.”

Walker shelled again as Blue Jays rout Mets
Lennon: Yankees have to be buyers, and this win backed that up
Yankees stun Red Sox by scoring four two-out runs in eighth
LI's O'Brien helps U.S. women's eight boat win heat
Lamoriello happy with cap space, but needs to replace lost players
Sanchez seems to be improving, could play Sunday
Didn’t find what you were looking for?