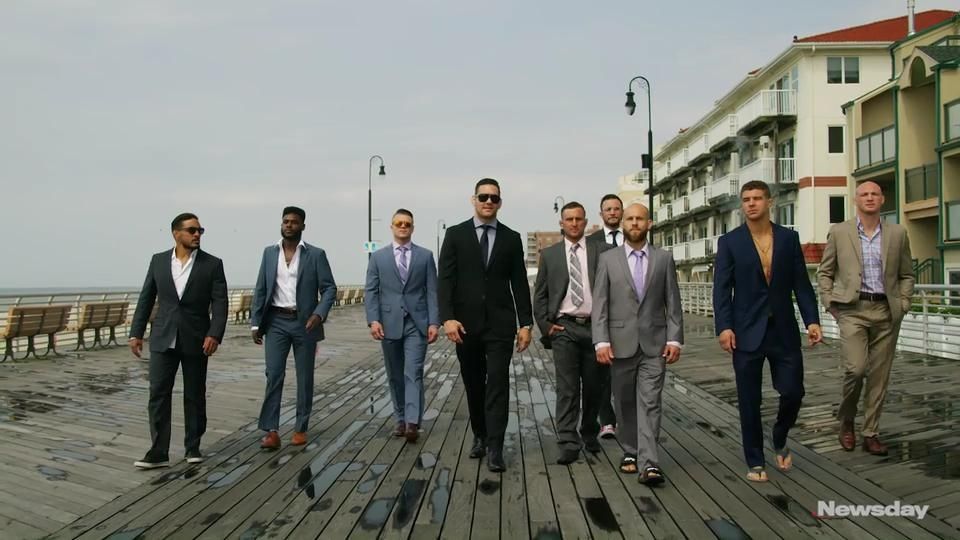 The UFC has nine active Long Island fighters on its roster. Meet the Island's gentlemen of the octagon as UFC Long Island at Nassau Coliseum approaches on July 22. Six of them will be fighting that night in the first UFC card in Long Island history. (Newsday/Chris Ware, Mark La Monica, Megan Miller)

In the cage at Bellmore Kickboxing Academy, Bermudez, Wade and Kelleher sparred.

On the hills at Herricks High School, Weidman, Villante, Wade, Bermudez and LaFlare willed their bodies up and down the grueling, cardio-building training session.

Six Long Island fighters, from four different gyms, all working toward a common goal — their homecoming at UFC Long Island inside Nassau Coliseum on July 22.

Long Island in the UFC: Then and now

“This fight, we are all coming together,” said Wade, a lightweight from Islip. “Bellmore Kickboxing, Long Island MMA, LAW MMA, Maxum. All these gyms, we all realize we’re a big family at the end of the day. It’s us against everybody else.”

Nearly half the fights for this UFC event on Fox feature a Long Island-based fighter.

These fighters have known each other for years and most of them have trained or sparred together at times. But never like this. Not in such a structured way. Not in such a large group. Heck, there was a time back in the early 2000s when some fighters in the various gyms despised each other.

“Pretty amazing to have the old gang together,” Lindenhurst welterweight LaFlare said. “It’s kind of like the old Ring of Combat days where we all used to fight together, me, Villante, Wade, [Al] Iaquinta, Weidman.”

There are nine fighters on the UFC’s active roster from Long Island, including Wantagh’s Iaquinta, Uniondale’s Aljamain Sterling and Massapequa resident Gregor Gillespie. A 10th one on the way after SerraLongo fighter Merab Dvalishvili earned a contract on the reality internet series “Dana White: Lookin’ for a Fight” last month.

The rumblings of such a reunion for this event came about at the UFC’s athlete retreat in Las Vegas in May. Several hundred fighters from around the world gathered to hear from the company and other speakers, see their new performance institute and learn a few things. Naturally, the Long Island guys managed to find each other.

“I think we all have this certain camaraderie between us Long Island people,” said Weidman, the former middleweight champion from Baldwin. “Even though some of the fighters are at different gyms, I’m always cheering for them and wanting them to win.”

Villante, a light heavyweight from Levittown, said he first brought it up to the group at the retreat that they all should do some conditioning together when they returned home. Things took on a life of their own afterward.

“Wherever we can get in the best workout that day, we’re gonna do it together and that’s that,” Villante said. “Hopefully it stays like this. It’s fun with all these guys. Nobody knows the hardships and the ups and downs of this sport better than the guys that do it.”

Four of the six fighters are ranked No. 13 or higher in their respective UFC weight class. Bringing in fighters from elsewhere to train, or working with inexperienced but hungry amateurs in the gym, seemed unnecessary with such high-level competition a short drive away.

“It’s silly that we’re 15-20 minutes apart and that we’re acting like we live five hours apart,” Wade said. “So why aren’t we using each other?”

With half a dozen professional fighters all focused on sharpening their skills for the same day, competitive juices flow. It becomes a matter of pushing each other, day after day, workout after workout, to be the best. Who can cut weight the smoothest, who can find the courage to run up that hill one last time and be the best conditioned athlete on fight night.

“We’re all pushing each other but in different aspects without actually physically competing against each other,” said Bermudez, a featherweight who lives in Lindenhurst. “A little competition together to get ready for the same thing together.”

The UFC is no stranger to putting hometown fighters on their cards. But not like this. Not in recent years, at least, and not in the U.S. Six of the 13 scheduled fights include a Long Island-based fighter, and another four have New York City connections.

“You know what Matt Serra said to me? ‘The Coliseum is the Garden to me,’ ” UFC president Dana White said. “That’s the mentality of those guys. It’s like their dream to fight there. It’s one of those special events for the people of Long Island.”

The most Long Island fighters on one UFC event was three and it happened twice. Sterling, Villante and Eddie Gordon fought at UFC on Fox 15 in Newark on April 18, 2015. The first time, Serra, Pete Sell and Luke Cummo fought at UFC 69 in Houston more than 10 years ago, when MMA was less mainstream and illegal in New York. This is the UFC’s first event on Long Island and fifth in New York since the state overturned its ban in March 2016.

“This is where I’m from, this where I was born and raised,” said Kelleher, a bantamweight from Selden. “It means everything to be able to fight in front of my family at home and do big things in Long Island.”