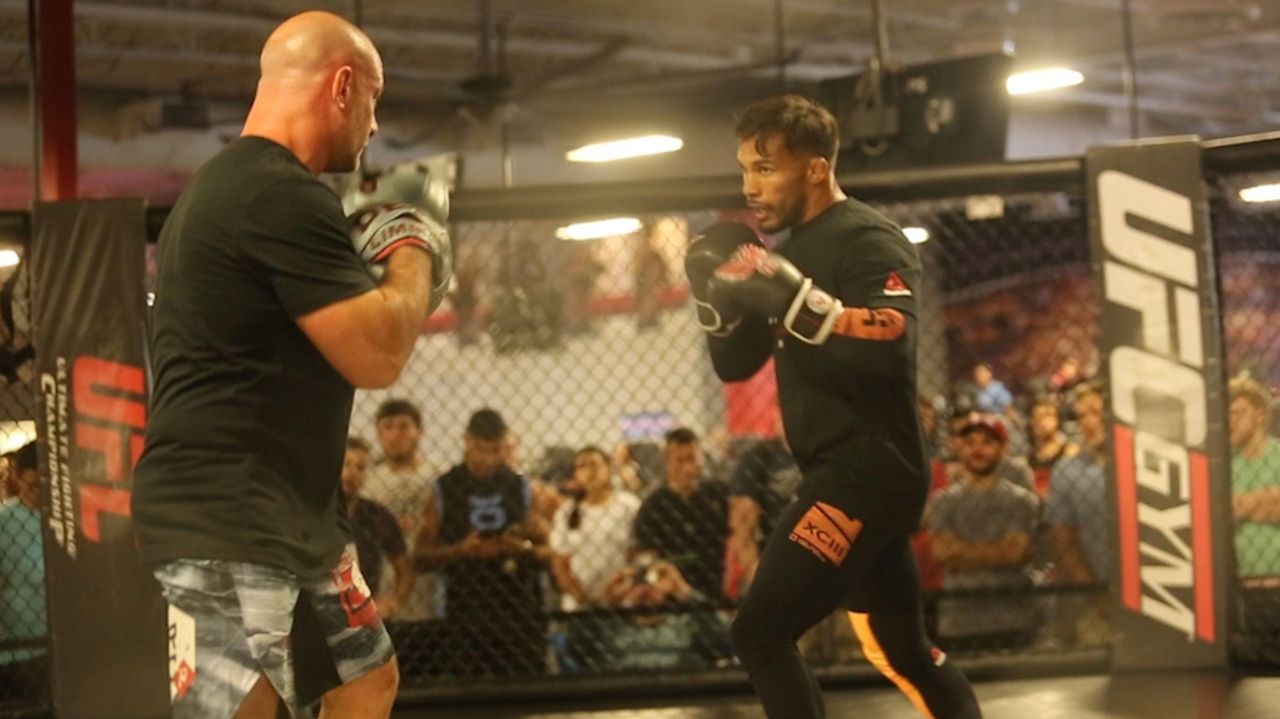 One well-timed shot can change everything in mixed martial arts.

Dennis Bermudez and Darren Elkins both learned that much in their last bouts, but in very different ways.

Lindenhurst’s Bermudez will be back in the cage at the UFC’s Long Island debut on Saturday at Nassau Coliseum, his first fight since being knocked out in the first round by “The Korean Zombie” Chan Sung Jung in February.

“The Zombie fight was like, it happens, it’s part of the sport kind of,” Bermudez said Thursday at UFC Long Island open workouts at UFC Gym in New Hyde Park.

Bermudez’s last fight was over in less than three minutes thanks to an impressive uppercut by Jung that sent Bermudez to the canvas. Jung followed with a few punches on the ground, ending the fight before Bermudez had much of a chance to touch his opponent.

In front of hometown fans, Bermudez hopes to show that’s not the fighter he’s worked hard to become.

“My last fight didn’t go as planned. I want to get in there come Saturday night and show everybody that’s not the real Dennis Bermudez, we had a little slipup.”

Elkins, however, hopes to prove he is the guy who put together one of the UFC’s greatest comebacks in his last bout. The Indiana native was down 20-17 on all three scorecards and had taken plenty of damage when he produced a stunning knockout of Mirsad Bektic with punches and a head kick late in the third round of their March bout.

“I went from most people knowing me in the UFC to people really becoming fans of mine,” Elkins said. “Even people who weren’t MMA fans watched that fight and were inspired by it. I had a lot of people reaching out to me and saying how gutsy it was and how inspiring a performance it was.”

While Elkins came away with the win, the punishment he took early that night gave Bermudez some ideas for the blueprint he’ll use Saturday.

“We’re looking to do exactly what Bektic did, just not get tired and do that for 15 minutes rather than 12 1/2,” Bermudez said.

Elkins hopes he’s closed those holes in his game before facing Bermudez.

“The focus on this camp was to work on my defense, I don’t want to take that much abuse this time, obviously,” Elkins said. “But make it an exciting fight, make it a fast-paced fight, I think me and him are going to have a lot of scrambles, then KO him at the end, that’ll always be exciting.”

Knicks want Walker to take his time getting healthy
Knicks can't stop Bridges (38 points) in loss to Hornets
Durant's absence felt as Nets fall to Cavaliers
Rangers' Barron knows time on roster could be expiring
Isles not overwhelmed about the road ahead
Nash: 'Unfortunate play' will sideline Durant for 'weeks'
Didn’t find what you were looking for?