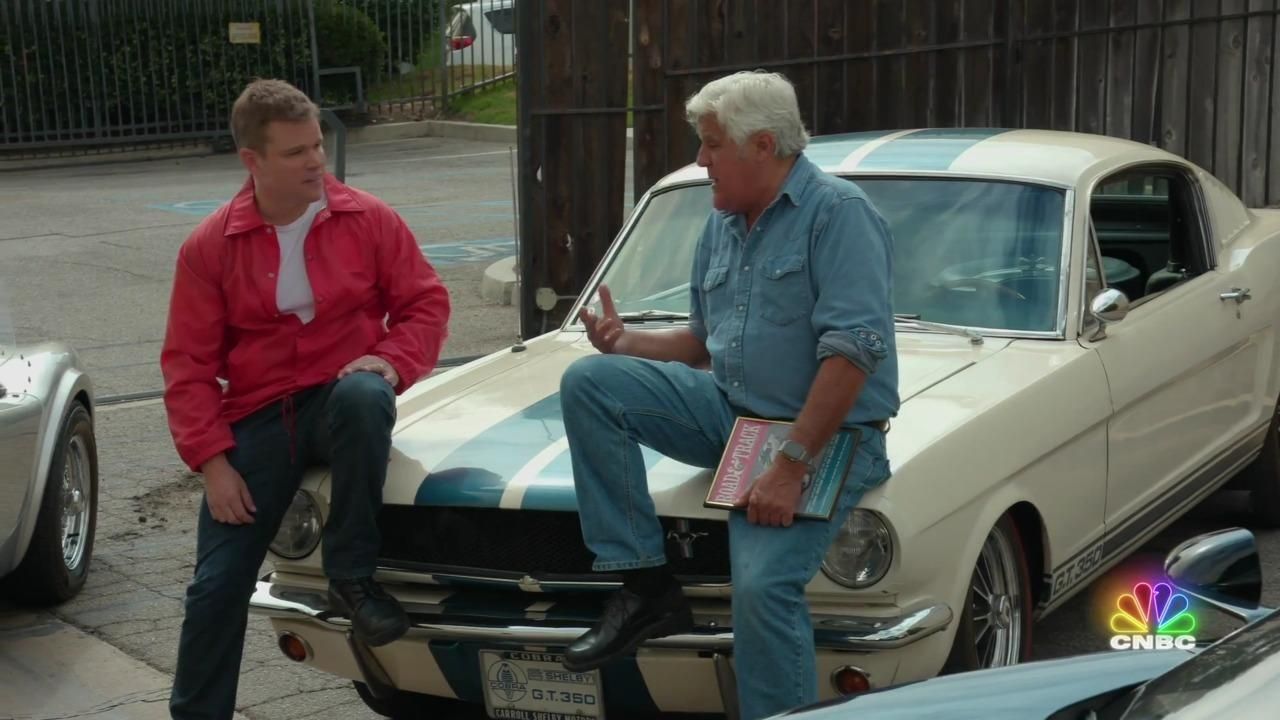 Matt Damon visited with Jay Leno on the Oct. 16, 2019 episode of "Jay Leno's Garage," where the two discuss Damon playing famed driver Carroll Shelby in the new movie "Ford v Ferrari." The movie will be in theaters on Nov. 15, 2019.

Jay Leno is not a big sports fan, so in his two decades as host of “The Tonight Show,” he sometimes had to “fake it” when it came to athletes, just as he did with actors and musicians with whom he was not familiar.

But his generalist days are behind him now, allowing Leno to focus his TV attention on a subject about which he is both passionate and expert: cars.

“This is kind of fun,” he said of “Jay Leno’s Garage,” now in its fifth season on CNBC. “I know the subject matter well, and I can pretty much talk about any kind of car or any situation. There’s never a script.”

On the episode that premieres on Oct. 16, Leno gets a rare chance to match his interest in cars with two subjects he covered regularly on his old show – movies and sports – only this time in a way that resonates personally.

As part of the promotion for the upcoming film “Ford v Ferrari,” actor Matt Damon visits Leno to talk about the man he plays, Carroll Shelby, the famed driver and designer, whom Leno knew well before Shelby died in 2012.

For Leno, the keys to the film were that Damon captures Shelby’s essence, and that the racing scenes are authentic to the sport and its mid-1960s period, culminating in the 1966 Le Mans race.

“Sometimes you get 90 minutes of car crashes,” he said. “No, this is a real movie. My wife, who is not a car person at all and didn’t know the outcome or any of the story, loved the movie and was stunned by the movie.”

The filmmakers stuck to real cars doing real things, without the aid of computer-generated imagery – or as Leno called it, “stupid CGI nonsense.”

Damon as Shelby was a more delicate, intimate matter. Leno recalled Shelby as a “classic American,” a showman and salesman too charming to resist.

He described him as the sort of man who after a visit “you didn’t mind that your wallet was missing at the end, because you were entertained.”

Shelby also was caring, be it in his charitable endeavors or his devotion to drivers. One of his concerns about Enzo Ferrari, whom Henry Ford II enlists Shelby to take on, is that he “kind of went through drivers fairly quickly.”

By that he did not mean that he fired them. He meant that many were killed in pursuit of Ferrari victories.

“Matt is great,” Leno said. “He really captures the essence of Carroll Shelby, the body language, just enough of a Texas accent.”

Carroll visited Leno’s garage often, and Damon follows in his footsteps on the show.

Leno has Damon recreate an old Road & Track cover that featured Shelby, then tells Damon, “This is the first time in my life I’ve known someone who was made the subject of a movie played by someone I know.”

Leno was impressed, as was Shelby’s family, who gave Leno a commemorative Shelby coin for him to present to Damon. Then Damon gives Leno a ride in a Cobra that belongs to Shelby’s grandson and that was used in the film.

Leno said his favorite racing movie prior to this one was the 1966 film “Grand Prix.” He also enjoyed director Ron Howard’s 2013 movie, “Rush.”

“I thought ‘Rush’ was terrific,” he said. “I know [Howard] well, and he’s not a car guy at all. But he really captured the essence of that.”

Leon said transitioning from “The Tonight Show” to “Jay Leno’s Garage,” was “the smartest thing I ever did.”

“It’s two different kinds of shows,” he said. “They don’t compete at all.”

And it allows Leno to focus only on what truly interests him. He said that when he does attend races, he tends not to focus so much on who wins, but rather on the process.