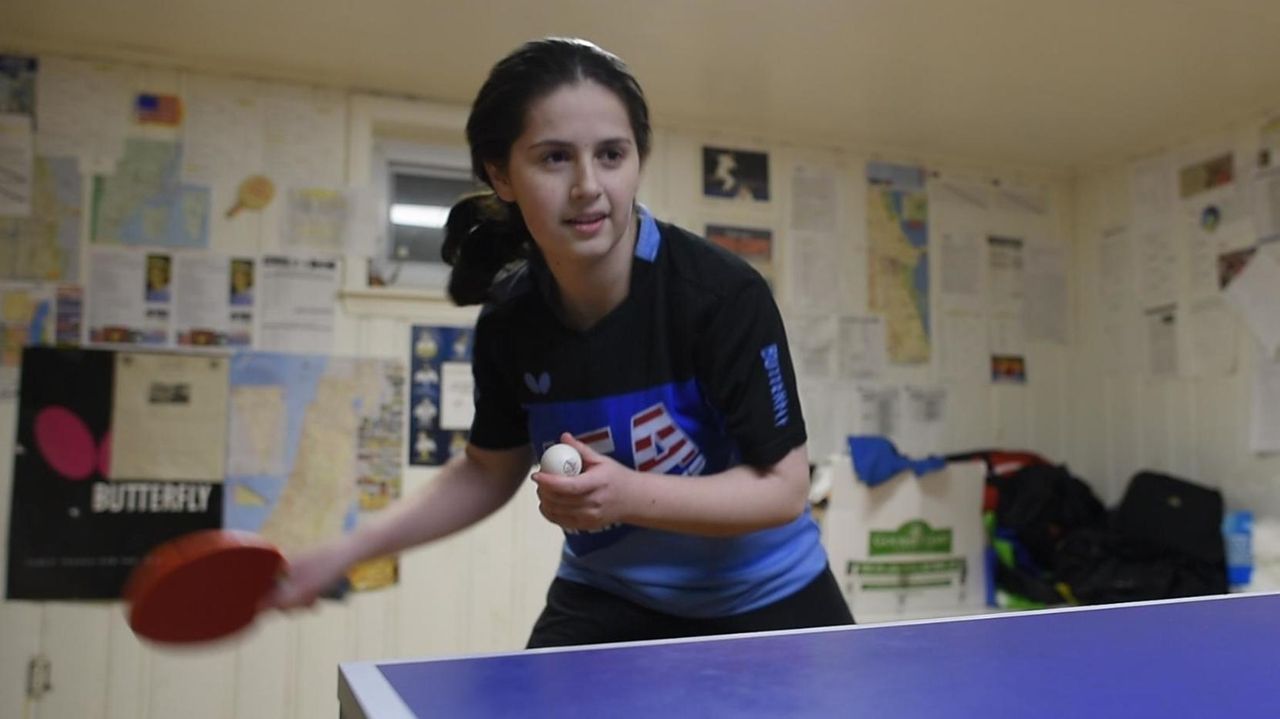 On Thursday, January 2, 2018 Newsday got an inside look into the life of 16-year-old Estee Ackerman of West Hempstead, a table tennis phenom looking to become the first American to win an Olympic medal in that sport. She aims to qualify for the 2020 Summer Olympics. Credit: Johnny Milano

You might say that Estee Ackerman is an ambassador of Ping-Pong Diplomacy.

The West Hempstead teen is a standout table tennis player with an eye on the 2020 Olympic Games in Tokyo. As she works to hone her skills — she won four gold medals and one silver medal at the U.S. Open Table Tennis Championship in Las Vegas in December — she and her dad, Glenn Ackerman, are spreading the word about their favorite game.

“This is something that’s been a dream of mine, to represent the United States,” the 16-year-old student at Yeshiva University High School for Girls said. Another goal for the Orthodox Jew is making table tennis an interscholastic sport among metropolitan area Jewish high schools.

“Thankfully, there are new ping-pong clubs which have been opening up,” Glenn Ackerman said. “Recently, they started one in the Jewish Community Center in Oceanside.”

Topend Sports estimated that more than 300 million people worldwide play table tennis, leading PledgeSports.org to rank it as the eighth-most played sport in the world in 2017.

Interest in the sport exploded in the 1970s, when the term Ping-Pong Diplomacy was coined after table tennis matches between the United States and China helped thaw relations between the two Cold War nations. It became an Olympic sport in 1984, dominated by Asian countries. The U.S. never has medaled in the sport at the Olympics.

Estee would love to be a member of the team that changes that. “That is definitely my goal,” she said. “Tokyo 2020 is a big eyesight for me. I know the toughest and biggest stage for me would be the Olympics.”

In 2016 — at 14 — she was among 16 female athletes trying out to represent the United States at the Summer Olympics in Rio de Janeiro. Only three of the 16 made the cut, and though she wasn’t one of the qualifiers, Ackerman said she learned from the experience.

“I’m very fortunate to say that I know my family puts no pressure on me,” she said. “I try to relish the moment. I try to enjoy it. I try to be thankful for the opportunity of where I am.”

Ackerman, who also plays basketball in the winter and tennis in the spring at the high school in Queens, uses what little spare time she has to speak with boys and girls about the opportunities to be had in table tennis.

Not only is it an exhilarating sport to watch, she said, it’s also quite the workout.

“My friends can’t believe that when I practice I’m even sweating,” she said.

Glenn Ackerman, a funeral director, said table tennis is a sport for nearly anyone, given its relatively low cost compared with other sports. And there’s no need to be an exceptional athlete. Form always can be taught, and repetition tends to lead to positive results.

“Here, in this sport, you have a chance,” Glenn Ackerman said.

“It was interesting because we know what a tennis player he is,” Glenn Ackerman said of her match with Nadal. “We were wondering how she would do against him, and she did quite well. What made it really so special was she was the only one who played with him that night in Grand Central Terminal.”

What once started as an innocent hobby — Glenn Ackerman said the family took up table tennis as a diversion from their electronic devices — has become an infatuation.

They have more than 500 balls in their basement and somewhere between 30 and 40 paddles, Estee said.

Estee’s brother, Akiva, 19, was also a nationally ranked player before giving up competition to focus on his studies. Their mom, Chanie, is an enthusiastic supporter, Estee said, but doesn’t play.

For Estee, the sport is one of inclusion. She’s just doing her best to get everyone involved.

Said Ackerman: “I just always enjoyed playing a sport that I know anyone can play.”

St. John's surges to victory over Fordham
Jets' defense allows points on first seven drives in loss to Eagles
Chicago interim coach King happy to see UBS Arena
Hodges finally voted into Hall of Fame
Islanders lose to Chicago in a shootout as skid extends to 11
Glauber: There's no defense for Jets' defense
Didn’t find what you were looking for?