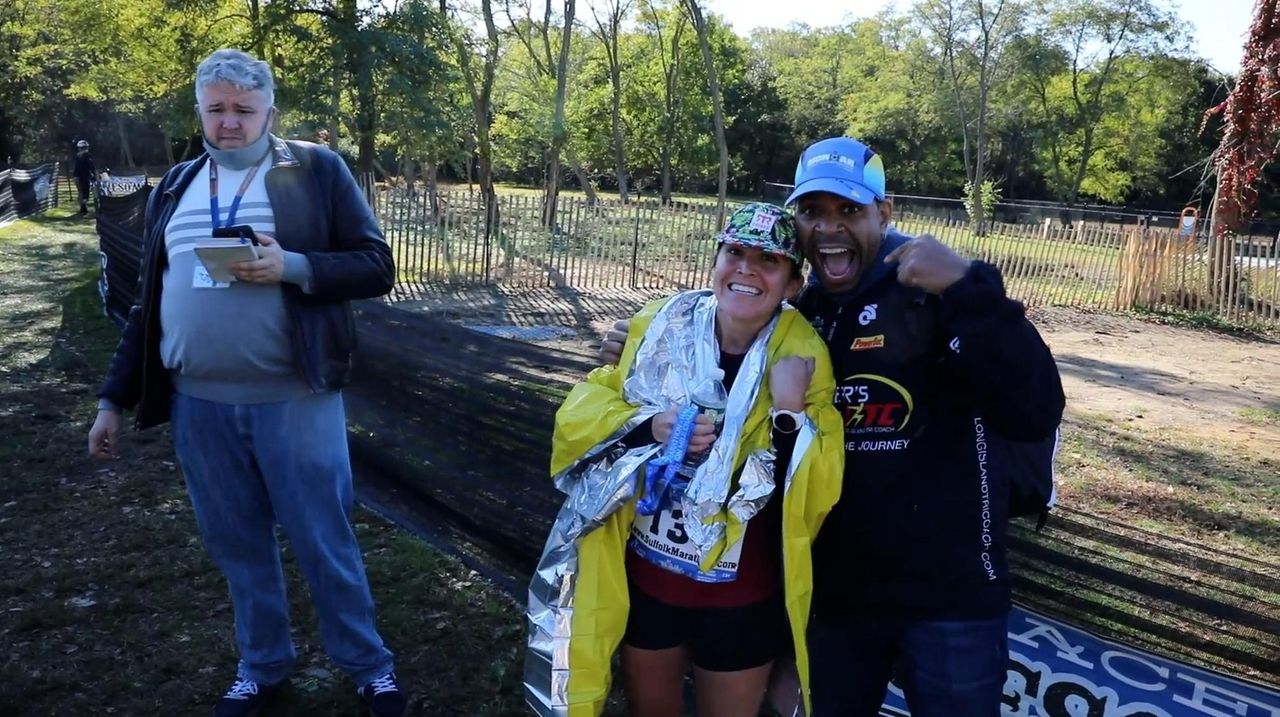 It was, in the words of Ali Caruana, "a perfect day."

The sun was out. The temperature was mild. Wind was almost non-existent.

Oh, and then there was the small matter of winning the women’s half of the seventh annual Suffolk County marathon.

By any measure, Sunday was a very good day for the Babylon resident.

"It was beautiful," said Caruana.

Caruana, a neurosurgeon at Stony Brook, topped the women’s field with a time of three hours and 41 seconds. Ian Stowe, originally from New Rochelle but now lives on the Upper East Side, won the men’s race with a time of two hours, 49 minutes, and 14 seconds.

Race organizers estimated more than 2,000 runners competed in a variety of races, which included a kids 1K, a 5K a 10 K, a half-marathon, and the marathon itself.

"It was breathtaking," Caruana said. "It was just...it was so worth it."

And it did not hurt that she was familiar with the course. Race organizers developed a new route for the 2021 race, beginning in Babylon Village and finishing in Gardiner County Park, a path that Caruana said she regularly runs with friends.

"I found an amazing group of people I train with. We wake up at four in the morning and we’re out there challenging each other," said Caruana, who noted that the only aspect of the course she hadn’t run prior to the marathon was the Great South Bay Bridge. "It’s part of my usual loop."

Whereas Caruana had home-field advantage, Stowe metaphorically stumbled upon the course while looking for a race.

"It looked like a nice course, flat, good cause," said Stowe, alluding to the fact that all donations were earmarked for Suffolk County veterans. "It was a win, win, win."

Not that it didn’t have its challenges. Specifically, the bridge that Caruana and Stowe, independently of each other, said was the toughest part of the race.

"I knew I was going to finish strong," Stowe said. "Whoever was biking with me, he kept telling me ‘that’s the leader, that’s the leader.’ I really had no idea. And then I slowly caught up. (I) just ran my race and happened to catch him."

Said Caruana, "Coming back was harder because it was just like the sun was beating down and there was a breeze. ...I’d probably like to do more training runs across the bridge just to get used to the wind."

Neither Caruana nor Stowe immediately knew what their next race would be — Stowe was looking forward to what he called "a nice, boozy brunch" to celebrate a friend’s 28th birthday— but both were open to the idea of running in the 2022 marathon.

"I want to run the New Jersey marathon because I’m from Jersey and it’s so fast and flat but they canceled it this year, so that’s why I chose to do this one. But I guess next would be [the Boston marathon] in the spring," Caruana said.

Added Stowe: "Yeah, why not? I’m not thinking about it right now but I probably will."