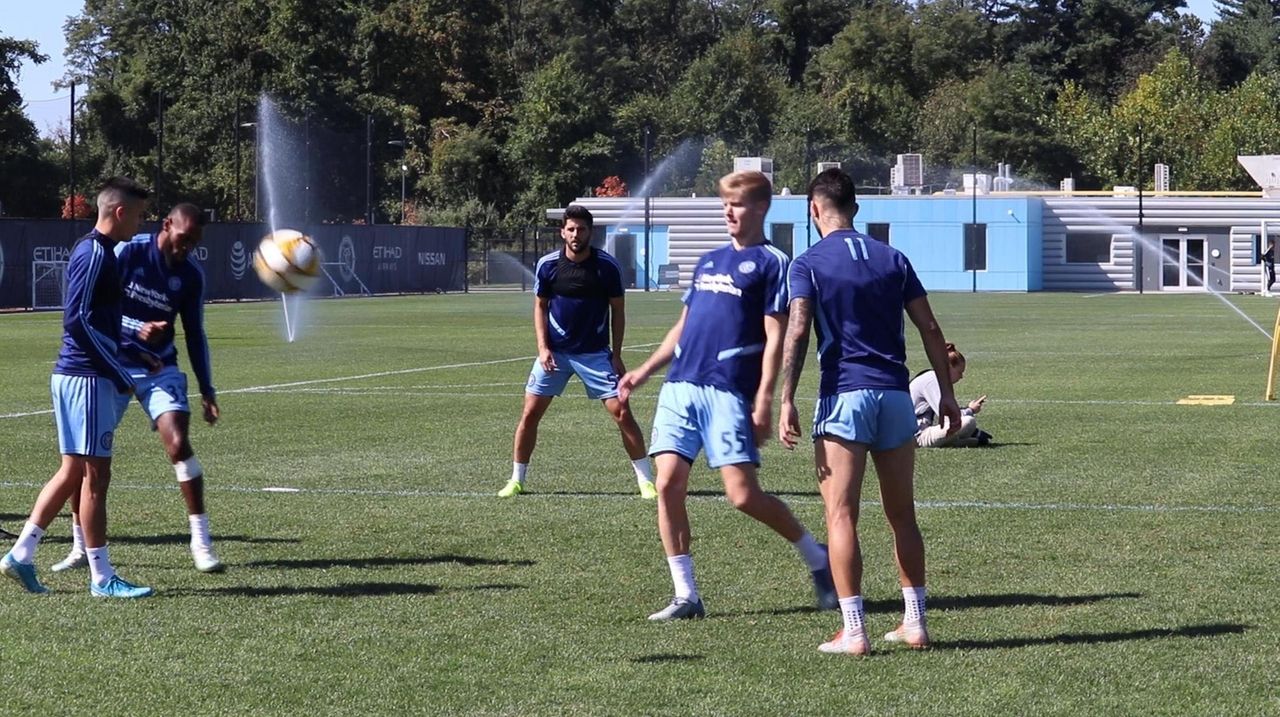 NYCFC midfielder Keaton Parks and head coach Domènec Torrent discussed Parks' journey to the first team in recent weeks, as well as his excitement ahead of this week's game against his hometown team, FC Dallas, on Thursday afternoon in Orangeburg, NY. Credit: Newsday / Ryan Gerbosi

“Keaton has a special quality, he’s never nervous,” Torrent said. “He has this quality, there’s no pressure.”

As he seems to do every game, no matter the opponent or occasion, NYCFC’s sudden stalwart in the midfield expects to maintain his composure on the ball and play with confidence when he takes the pitch at Toyota Stadium in Frisco, Texas on Sunday, characteristics developed on practice fields not far away.

Parks, a North Texas native, makes his first visit home as a professional when NYCFC faces FC Dallas on Sunday in its final long road trip of the regular season, just as he’s making his biggest impact on the field. On a season-long loan from Portuguese powerhouse SL Benfica, he played just 28 minutes total in MLS over the first three months of the season, but now is a virtual certainty to start each time out thanks to his ability to keep things under control.

“I think I do help bring a calmness to the team, I think sometimes I’m too calm and I get yelled at by [captain Alex Ring] and whatever,” Parks said. “But I think it helps a lot just to have a guy that’s in the middle that’s calm and confident on the ball and I think it helps bring everybody in and calm everybody down to keep the ball and play with confidence.”

Following a few breakout U.S. Open Cup performances, Parks earned his first MLS start on June 29 and hasn’t looked back, making at least a cameo in each match since. NYCFC has won 10 of 13 games in which Parks has started, as opposed to just six wins out of 17 when he’s left out. For Torrent, who constantly preaches control as the key characteristic of championship sides, Parks has become an invaluable piece to his squad.

“Sometimes, you have to say to him, ‘careful,’ because he plays the same way when he drops to play in our 18-yard box and it’s not the same. I remember this player, [current Bayern Munich midfielder] Thiago Alcantara, Thiago played in the same way, it doesn’t matter if he’s at the penalty spot or another. But he’s very important because right now because he’s very confident in himself, the team has confidence with him and the reason why is he never gives up.”

Parks credits his youth coach in the Dallas-Fort Worth area, Armando Pelaez, for his calmness in possession. A former professional in Portugal, Pelaez instructed his teams to play with “confidence and freedom” without worry of consequence, Parks said.

“He was never very strict on our teams, he always wanted us to experiment and try stuff out, try dribbling and try to make that hard pass. He gave us a lot of freedom when we played, it helped us learn a lot,” said Parks. “I think that’s important in growth, to try new things and find out what works before you get to a professional level where you can’t really do that really any more, you’ve got to be spot on and not make mistakes.”

Pelaez and his current youth teams are among the large group expected at Toyota Stadium in support of Parks on Sunday. Located about 25 miles north of Dallas in the suburban city of Frisco, the home of FC Dallas has held a place in Parks’ life since its opening in 2005. Although he never played for the club’s academy teams, the Plano, Texas native and graduate of Frisco Liberty High School said his family had season tickets for a few seasons. He even took part in walkouts before a handful of games as a kid, including before an MLS Cup Final at what used to be called Pizza Hut Park.

“I went to a lot of games and even for high school soccer, we played some of our games in that stadium, I know the stadium really well and I know the area and it’s going to be cool to play professionally back there,” Parks said

While Parks is reliving his past somewhat at Toyota Stadium this weekend, his future remains uncertain. With his loan expiring in January, Parks said he’d be happy to make his move permanent with NYCFC, but also would be happy with a return to Benfica, who consistently compete for Portuguese Primeira Liga titles and appear in the prestigious UEFA Champions League.

For now, Torrent is happy to have a versatile embodiment of his philosophy on his side.

“The mentality of Keaton is amazing. Right now, it’s good news for us because he can play in different positions,” Torrent said. “I remember against New England he played at centerback, at right back and he played really well. Maybe next game he’ll play like a striker, why not?”

Highlights: Isles hold on to win Game 4
Barker: Big 3 derailed by health and Nets' window could be closing
KD's 48 points not enough as Nets fall in OT to Bucks, losing Game 7 and series
Urshela stays in after freak play, hits go-ahead HR in Yanks' win over A's
NYCFC again drops points at home, gives up late goal in loss to Revs
Isles turn back furious Lightning push to even series at 2-2
Didn’t find what you were looking for?