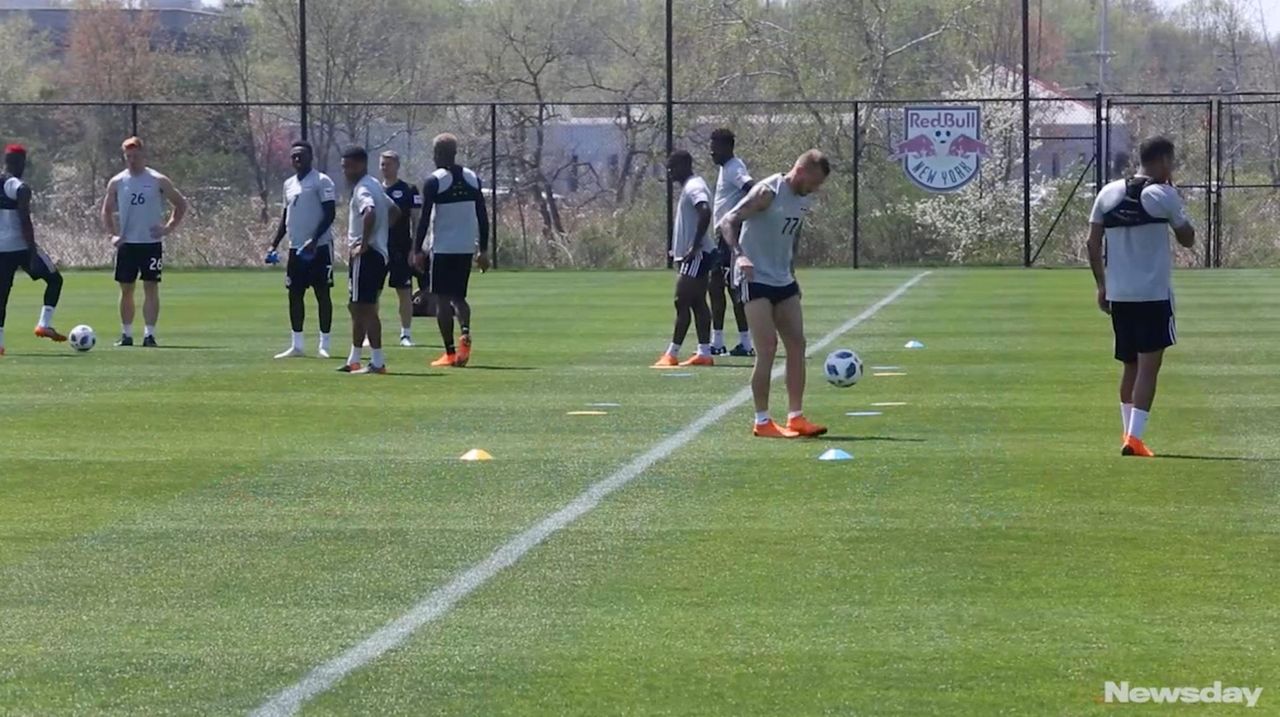 The New York Red Bulls will face NYCFC on Saturday, May 5 at Red Bull Arena in Harrsion, NJ in the first of three match-ups this season.  Credit: Newsday / Ryan Gerbosi

WHIPPANY, N.J. — Red Bulls forward Bradley Wright-Phillips can’t tell you why he’s been so successful in the early stages of the Hudson River Derby, but he’s not complaining.

The striker has 10 goals in nine MLS matches against cross-river rival New York City FC and is hoping for more of the same when the teams meet Saturday at Red Bull Arena, even if he can’t explain why he’s had City’s number.

“I don’t really know. The derby, it’s been good for me, it’s kind of hard to answer,” Wright-Phillips said on Thursday. “It’s gone well for me, I enjoy playing in the game. I don’t put any more effort than I do in another game, it’s just been like that.”

It’s been like that for Wright-Phillips since the beginning of this series. He scored goals in each of the first four matchups after NYCFC joined the league in 2015, including two in very first meeting, a 2-1 Red Bulls home victory.

The Red Bulls are 5-1 in six matches against City in which he’s found the net and 1-1-1 in the three he’s been kept scoreless. The second leading scorer in the series is NYCFC’s David Villa, who has four goals against the Red Bulls.

“It’s incredible,” said Red Bulls head coach Jesse Marsch. “It means that he’s a big-game player. He’s shown that. When you grow up in Manchester (England), I think you know what derby matches are about. Probably watched his father, so I think he’s always been ready for these games. They’re exciting, they’re fun.”

“It’s got bigger. I think the way we started and winning all the time, it gave them some fight and now they’re on top of the league right now,” Wright-Phillips said. “They’ve had two good seasons in a row and it’s going to be tougher for us, but since it first started, it’s definitely been getting better and evening out, it’s not one sided. It’s good, it’s good to be involved.

“You’ve definitely got to respect the occasion, but you can’t let the occasion play you. It’s about being up for the fight, but having a calm way about it. Whoever executes the best on that day normally wins.”

Wright-Phillips might not know why he’s been this successful on New York soccer’s biggest stage, but Marsch has an idea.

“He’s been able to challenge their back line and their goalkeeper often, and that’ll be the goal again,” Marsch said. “And what’s so amazing about Brad, he’s no secret. Every game that we play, the team has a defensive scheme and emphasis trying to take care of him, and yet he scores all the time. I’m sure they’ll want to be hard on him and physical on him, but the key is for the rest of the team to be really clear and tactically sharp and good in moments of transition because the more that we have weapons and other weapons, it means that Brad will be open more as well.”

The Giants' offensive line has four coaches . . . for five positions
Biggest obstacle for Giants' Toney: Dealing with loss of grandmother
Breaking down Garrett's 'Coach' exchange with reporters
Sanchez the next Yankee to test positive for COVID-19
Mets lose to last-place Marlins to set up showdown with Phillies
Source: Randle agrees to contract extension with Knicks
Didn’t find what you were looking for?