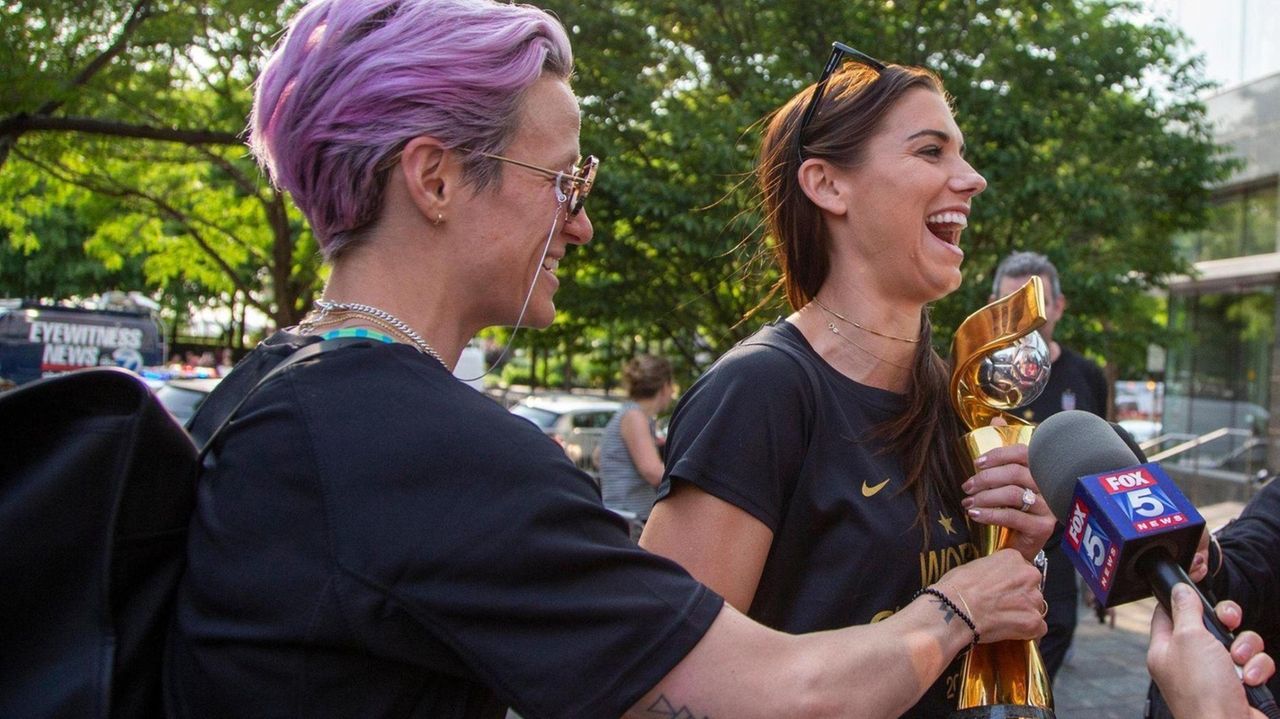 On Monday, players from the U.S. women's national team, fresh off their Women's World Cup victory, arrived at the Wagner Hotel and spoke about the politics they've become involved in, and the ticker tape parade they'll be honored with on Wednesday. Credit: Howard Schnapp

There were grins and there were cheers, big gold bottles of champagne and of course that swirling gold trophy, hoisted up in the air by Megan Rapinoe and then passed to Alex Morgan, who cradled it with deference.

By every metric, the U.S. Women’s National team descended on their Battery Park hotel on Monday as the brash and jubilant World Cup champions who seized global attention this last month.

But when they spoke — and the members of this team, led by Rapinoe, have never been afraid to speak — they reflected another aspect of their communal personality: ambassadors and activists, and still very intent on using this World Cup victory as leverage for equal pay for women soccer players.

Rapinoe continued to speak openly and confidently about what she considers a long overdue change. Politics wasn’t off topic: They’re still not going to the White House, she said, though she doesn’t believe they were invited. Rapinoe and the women’s team have long stated that they will not visit president Donald Trump.

Trump said he would invite the women’s team a few weeks ago, whether they won or lost, but appeared to backtrack later when asked, saying, “We haven’t really thought of it. We’ll look at that.”

“I think in terms of politics, we’ve received so much support,” Rapinoe said, shortly after touching down with her team at Newark Airport and traveling by coach bus and police escort to their hotel. There will be a parade in the Canyon of Heroes Wednesday morning, just like when they won in 2015, and the team will stay local until at least then.

“We will definitely be going to Washington, certainly not to the White House,” she continued. “AOC (Rep. Alexandria Ocasio-Cortez) has reached out on Twitter … I think it’s really exciting. We’ll have a great visit to Washington. In terms of the President, he said he was inviting us either way, but the invitation hasn’t come yet, and it’s been a full 24 hours, so I don’t think it’s coming.”

Rapinoe, Morgan, Rose Lavelle and Long Island’s Crystal Dunn were by turns elated and steadfast. Lavelle acknowledged that they’ve been under criticism, first for scoring 13 goals in a rout over Thailand, though goal differential is important in World Cup play, and then for their celebrations.

Morgan’s face was plastered across the world as she mimed sipping tea, a cheeky ribbing of the English team after the U.S. beat them. Detractors said they were being classless in the face of domination.

“You can’t be everyone’s cup of team,” Lavelle said. “Not everyone is going to like you and that’s fine. I think we’re happy to be who we are and like I said, I couldn’t be any more proud to be part of this team.”

One reason for her pride was their fight for equal pay, something echoed by the other women.

The USWNT is suing the U.S. Soccer Federation for discrimination, and when they beat the Netherlands on Sunday, the stadium was filled with chants of “Equal Pay.” The suit argues that women are paid less than the men for equal work and pay, and in this case, better results (the men’s team did not qualify in the last World Cup).

While that is still being argued, it’s true that men’s World Cup teams receive a pool amount of $400 million from FIFA, while the women’s Cup teams receive $30 million. Morgan also argued for more worldwide investment from the individual federations, to bring more parity to the sport.

“The proof is in the pudding,” Rapinoe said. “The TV ratings are there, the revenue is there, the support is there, the interest is there, sold out stadiums, superstars, role models, everything. What more do you want from us? We’ve literally done every single thing, checked off every single box, been the perfect ambassadors to the sport in so many ways. I think it’s time to move that conversation to the next level.”