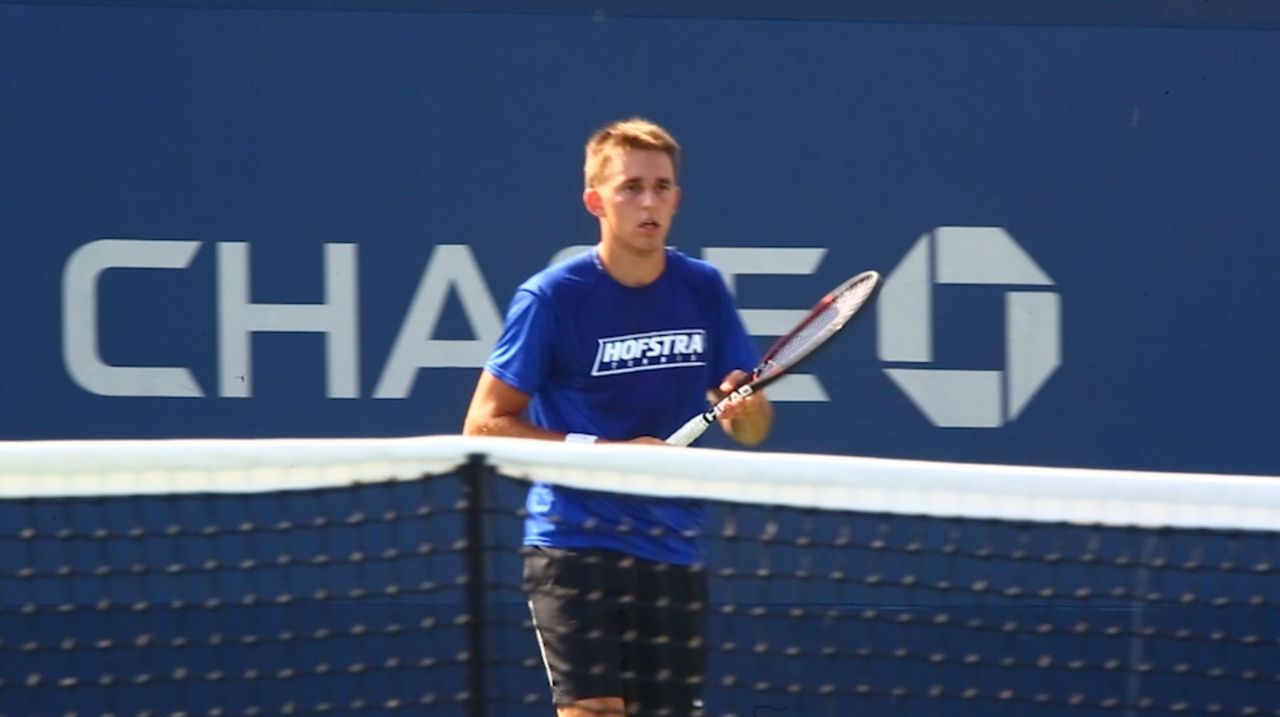 On Thursday, Aug. 31, 2017, Hofstra junior Marcus Smith showed off some of his skills at the USTA Billie Jean King National Tennis Center in Flushing Meadows-Corona Park. Smith is a warm-up tennis player - he gets to play with the pros to get them ready to perform on the big stage. Credit: Newsday / Chris Ware

In the hours before taking the court at the U.S. Open, the top players in the world are spotted working on last-second adjustments, fine-tuning their swing and preparing with a practice partner, someone like Hofstra tennis captain Marcus Smith.

“I’ve always been jealous of seeing other people do it at some tournaments or just watching I was like, ‘I’d really love to get on the court with them,’ ” Smith said. “And now I’m doing it and I’m not taking any moments for granted.”

Smith has spent more than a week as a U.S. Open practice partner, warming up men’s and women’s players before their matches, highlighted by a session last Saturday with 2014 U.S. Open champion Marin Cilic.

“I try to just focus on the ball because the tennis ball is the same with anybody or anywhere you play,” Smith said. “I understand it’s being hit by someone maybe ranked No. 10 in the world, but it’s still a tennis ball.”

Smith, a Queens native, has had Hofstra coach Jason Pasion at the U.S. Open with him to offer encouragement and advice.

“It’s just good to have support because sometimes when you’re out there alone with a player and they have their coach, you feel like you’re on a little island and there’s a lot of pressure,” said Smith, who is a junior at Hofstra. “There is a lot of pressure to keep the ball in with these guys, so if I have him saying, ‘Calm down, you’ll be all right,’ then it’s not as bad as I think it is and my level improves.”

Pasion, in his second year at Hofstra, enjoys seeing Smith get opportunities and have success. He said it’s a major reason why he became a coach.

“I really wanted to see kids develop into good players and good young adults,” said Pasion, who grew up in Islip and now lives in Lindenhurst. “I sort of live vicariously through them, seeing them out there because I’ve taught Marcus a lot and to see him out there on the court really means a lot to me.”

Pasion said he reached out to a coaching friend and got Smith an opportunity to hit with Christina McHale, currently the No. 63-ranked women’s player in the world, in January. After a good performance hitting with McHale, Pasion said he reached out to Jay Devashetty, a United States Tennis Association national coach, and Whitney Kraft, head of player operations for the U.S. Open, and Smith was selected to be a practice partner.

Smith said he thought he’d be active once or twice a day at the U.S. Open, but said he has played more than four hours daily, working with multiple players.

Pasion said he is excited about not only what this opportunity will do for Smith, but also for Hofstra.

“I think he’s really going to take a lot of that into his own game and hopefully share it with his teammates,” Pasion said. “It’s beneficial for him, but it’s going to benefit all of Hofstra and his teammates, I believe.”

And it has provided a confidence boost for Smith.