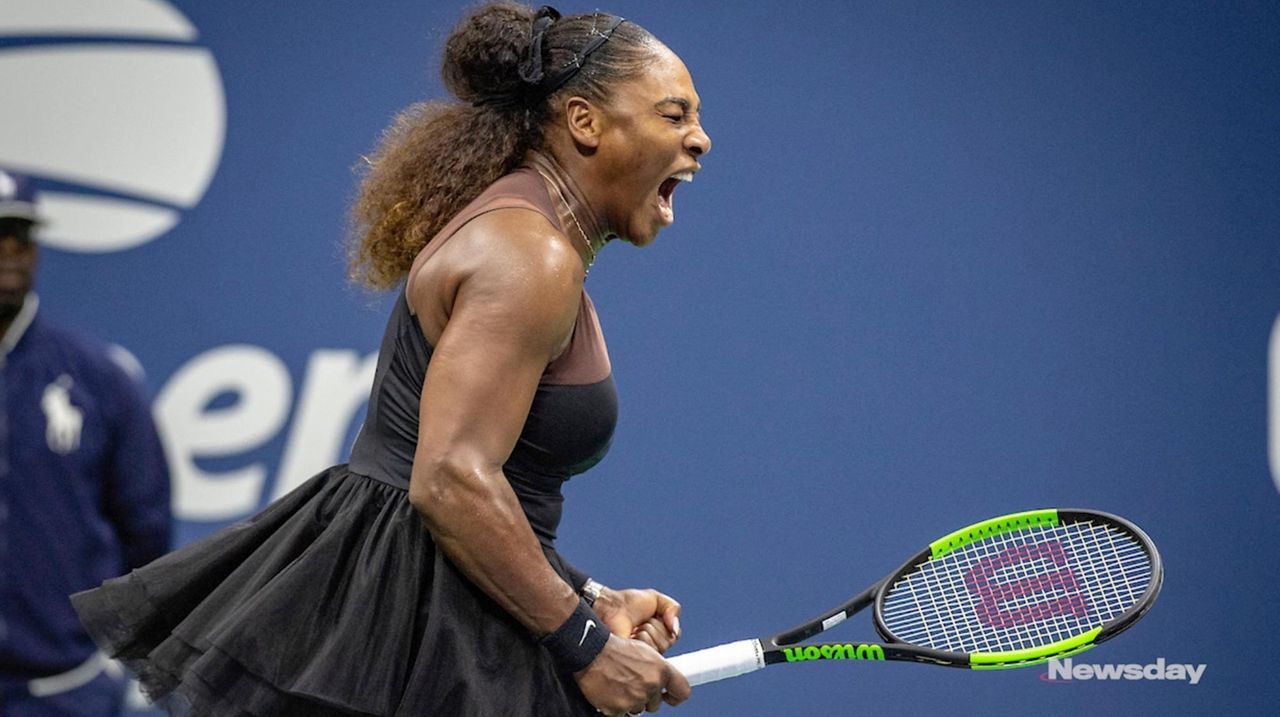 For nearly two weeks, Serena Williams dominated her opposition at the U.S. Open. She seemed poised to win her 24th Grand Slam title, just 53 weeks after giving birth to her daughter. But in the finals, Williams was derailed by the play of Naomi Osaka and unnerved by some of the decisions of the chair umpire. Credit: Newsday staff

That Osaka defeated the icon of the sport by taking control of the match also is undisputed.

But what is in dispute was dispute itself.

Chair umpire Carlos Ramos docked six-time U.S. Open champion Serena Williams a point, then a game for her second and third code violations in the second set on Saturday.

Williams went on to lose to Osaka, 6-2, 6-4, in a bizarre, argument-filled finish to what had been an enthralling match between a major up-and-comer and an all-time great.

When it was done, and the players were called to the trophy presentation, Osaka and Williams were in tears, but Williams hugged and comforted Osaka and then addressed the pro-Serena crowd.

“I know you guys were rooting, but let’s make this a great moment. Let’s not boo. Let’s be positive,” Williams said. “Congratulations, Naomi. No more booing.”

The soft-spoken Osaka, 20, found what few words she could in a very difficult moment. “I know that everyone was cheering for her. I’m sorry it had to end like this,” said Osaka, who beat her idol and the player who had inspired her.

In the second game of the second set, Ramos called Williams for a coaching violation, the first warning. Patrick Mouratoglou, her coach sitting in the players’ box, admitted to ESPN that he was coaching.

Williams said she thought Mouratoglou was giving her a thumbs up.

After the match, when told that Mouratoglou had admitted to coaching, Williams said: “I literally just heard that, too, when they prepped me to come in. I just texted Patrick, like, what is he talking about? Because we don’t have signals.

We have never discussed signals. I don’t even call for on-court coaching. I’m trying to figure out why he would say that. I don’t understand.”

After the second violation for smashing her racket after being broken in the fifth game (allowing Osaka to start serving at 15-0 in the next game), Williams launched into a heated argument with Ramos and continued the argument on the changeover.

“You are a liar. You are never going to be on my court ever again,” Williams said. “Say you are sorry. How dare you insinuate I was cheating. You stole a point from me. You are a thief, too.”

She was issued a third violation for verbal abuse, which calls for a game penalty. Instead of serving at 3-4 down, she was serving at 3-5. The crowd, and Williams, were stunned. And the boos rained down, exaggerated by the fact that with showers in the area, the roof was closed.

Now tournament referee Brian Earley was called to the court, and after consulting with Ramos, he had a long talk with Williams and let Ramos’ rulings stand.

Williams held serve to trail 5-4, then Osaka served out the 10th game for the match. Osaka broke Williams’ serve four times and was broken only once. She had only one double fault to Williams’ six and had a 21-14 advantage in unforced errors.

In 2009, Williams lost her U.S. Open semifinal match to Kim Clijsters on a penalty point after she went on a tirade against a lineswoman. It was her second code violation of the match. In her 2012 final loss to Samantha Stosur, the chair umpire awarded a point to Stosur when Williams hit what would have been a clear winner but cried out “Cmon!” before Stosur had a chance to play the ball. The umpire deemed it a hindrance.

In 2004, she disputed a shot that clearly was wide in a loss to Jennifer Capriati when a chair umpire overruled a call by a linesman to call the shot good. The USTA ultimately apologized for the error and implemented video replay on the feature courts.

“Oh, gosh, I don’t want to go back to 2004,” Williams said. “Forget 2009, you know. It started way back then. So it’s always something. But that’s also kind of, like, this game mentally that you have to play with. You know, sometimes it might seem like things always happen, but I don’t know the word I’m looking for. You just kind of have to, like, try to realize that it’s coincidence. Maybe it’s coincidence, so . . . ”

Williams said that after the coaching violation Saturday, she had what she thought was a positive conversation with Ramos. “I had a good conversation with him,” she said. “I said, ‘Listen, you know my character. You know me really well. Like you know that I don’t even call for on-court coach. I don’t even do that.’ He’s like, ‘You know what? I understand.’ I don’t know if he said, ‘You’re right.’ But he understood. He’s, like, yeah, I get what you’re saying.”

Then came the racket smash, a second violation that carries a point penalty, and finally the fatal third violation for verbal abuse that cost her a game.

When Williams called for the booing to stop at the victory ceremony, it was to let Osaka enjoy her victory.

“She played an amazing match. She deserved credit, she deserved to win. At the end of the day, that’s what it was.”

Second game of the set, Williams is called for a code violation for receiving coaching from her players box, which does not to come with an automatic penalty. It is a warning.

After being broken to lose the fifth game of second set, double faulting twice, she smashed her racket and received a second code violation for abuse, which carried a penalty point awarded to Osaka to start her serve in the sixth game.

After being broken in the seventh game, she continues her argument with Ramos and in the end calls him a thief. He calls her for a third code violation, which comes with a loss of game. Instead of serving 3-4 down, she was 3-5.