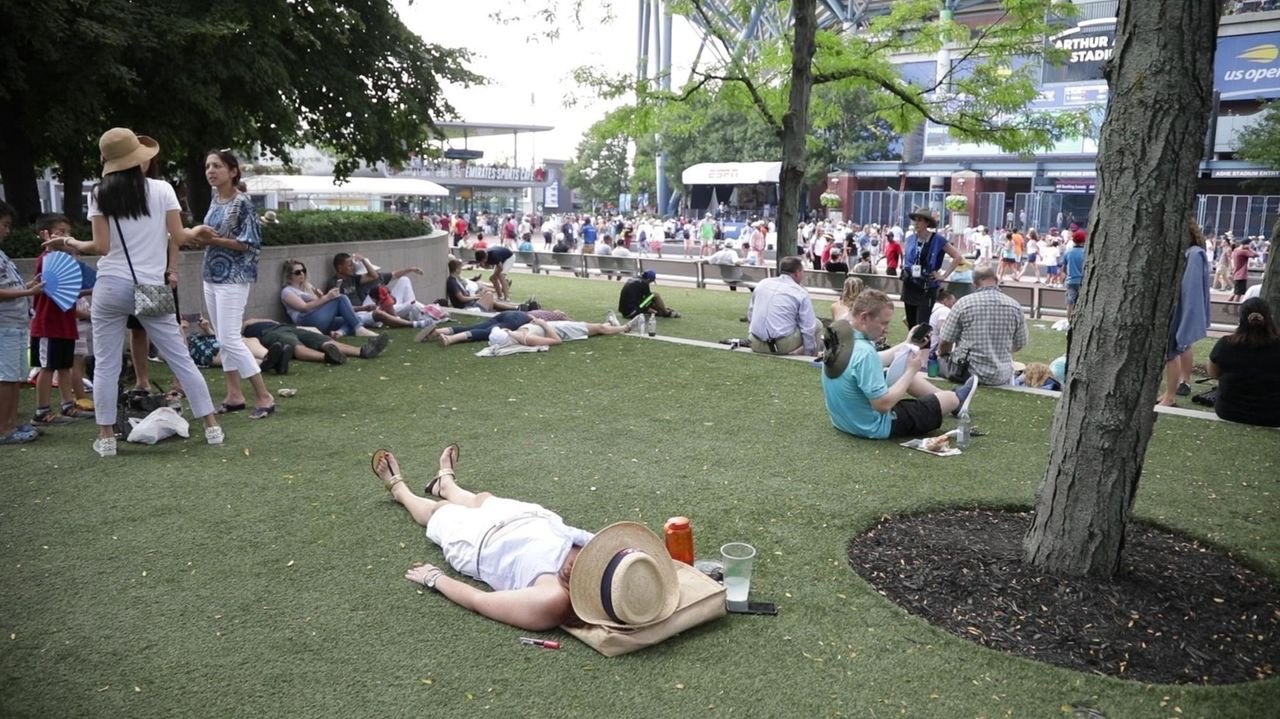 Fans in Flushing Meadows for the first round of the U.S. Open talked on Tuesday about the sweltering heat and how it affected their enjoyment of the matches. Credit: Newsday / Yeong-Ung Yang

No jokes about getting out of the kitchen. Temperatures reached 98 degrees, the heat index hit 107, well north of the sweat-o-meter red-lining, but the U.S. Open’s combatants soldiered on Tuesday. With surprisingly few exceptions. At the conclusion of the day session, only a handful of players had surrendered mid-match.

Lithuania’s Richard Berankis, ranked 104th, retired because of  “heat illness” in the fourth set against No. 23 seed Hyeon Chung of South Korea. Stefano Travaglia, a qualifier from Italy ranked 141st, quit because of cramps in his match against Polish qualifier Hubert Hurkacz, ranked 109th. As did Russia’s Mikhail Youzhny against Cyprus’ Marcos Baghdatis in a battle of Slam veterans.

All the retiring  players left while trailing in their matches, including Marius Copil, Romania’s 82nd ranked player, who cited an arm strain against No. 7 Marin Cilic; and Argentine Leonardo Mayer, ranked 43rd, against Serbia’s No. 89 Laslo Djere, because of dizziness and fatigue.

The suffocating temperatures clearly were a concern. Throughout the Billie Jean King National Tennis Center grounds, players were wrapping ice towels around their necks, quaffing water during changeovers and sneaking moments in the limited shade at the courts’ ends between points.

Just after 1 p.m., tournament officials implemented their Extreme Heat Policy, which manifested itself in slightly different forms for the men and women, based on separate tour rules. In both cases, that meant offering players one 10-minute timeout—for the women, after two sets; for the men, after three—if requested by the players.

Andrea Petkovic, a German ranked 89th, said the 10-minute break seemed to work against her, because when she returned from that break in an air conditioned room, “it felt like five billion degrees” back on court. Her conqueror in three sets, 10th-seeded Jelena Ostapenko of Latvia, meanwhile, said she found the break refreshing — and an opportunity to change clothes.

No. 20 seed Naomi Osaka, who represents Japan but lives in the warmth of Florida, said her only strategic adjustment on Tuesday was to put extra sweat bands in her bag. Most players recited the boilerplate that while the heat was “very tough,” it was “the same for both players.”

That didn’t prevent trotting out references to the mysterious Wet Bulb Globe Temperature — a measure of heat stress in direct sunlight that takes into account temperature, humidity, wind speed, sun angle and cloud cover. When the WBGT number hits 30.1 Celsius—86.4 degrees Fahrenheit—it triggers the 10-minute break on the women’s tour. But the men’s tour relies on the discretion of the tournament referee, in consultation with the medical staff, to take action.

Talk of closing the retractable roofs over Arthur Ashe and the new Louis Armstrong Stadium was dismissed. In part, because of the U.S. Tennis Association commitment, when the Ashe roof became operational two years ago, that the Open remain “an outdoor tournament,” with the roofs closed only for rain. Also, covering Ashe and Armstrong wouldn’t solve the heat problem on the other 14 courts in play.

Mostly, everyone was hot but not unduly bothered.

Isles focused on Rangers, not three games with Capitals
Meet the independent analytics guru helping Stroman, other Mets
Carton & Roberts take over No. 1 sports talk afternoon spot
Cashman confident last-place Yankees will turn things around
Rose manages to bloom again with the Knicks
Rangers know actual points, not style points, matter most in playoff push
Didn’t find what you were looking for?