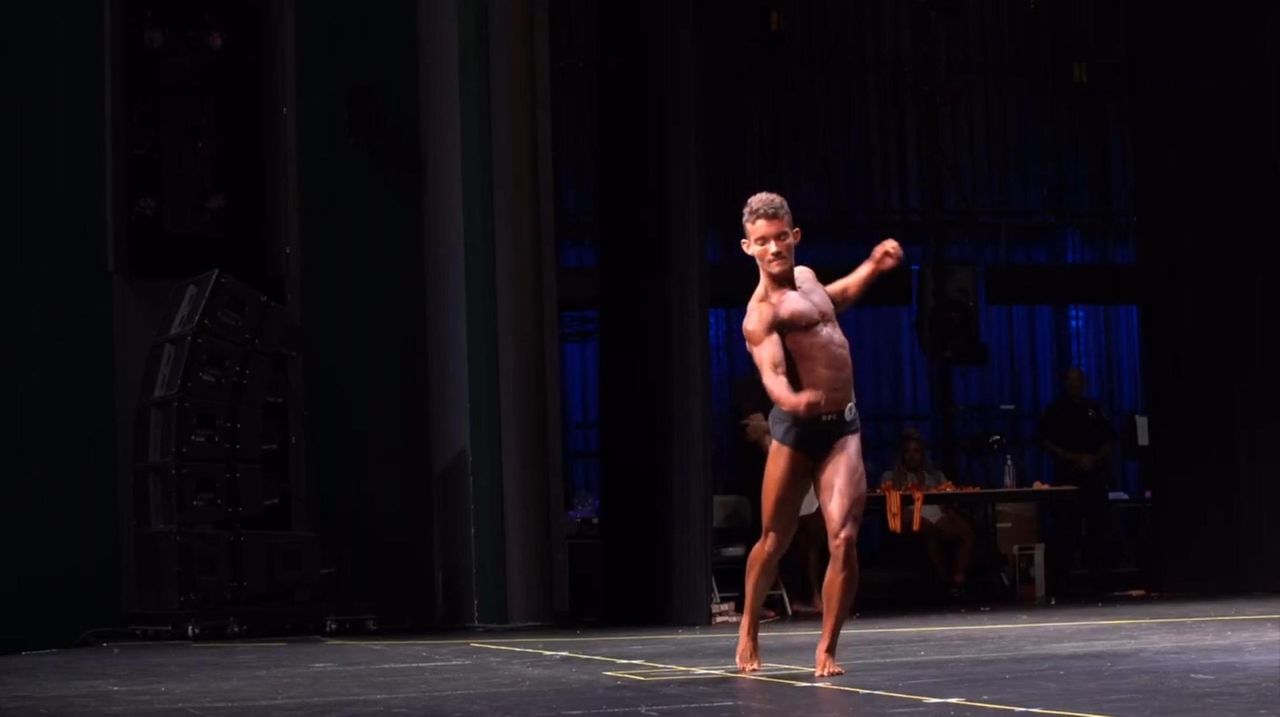 On stage, wearing a Speedo swimsuit, several layers of self-tanning spray and smiling broadly, Alex Tilinca said he felt the world was finally seeing him as the person he was meant to be.

With his parents and friends cheering and crying in the audience, Tilinca, an 18-year-old transgender man, won first place in the Teen Classic Physique competition at the Victor Martinez Legends Bodybuilding Competition in the Bronx in August.

“It was like the universe was telling me to keep going. Don’t stop,” said Tilinca, a freshman marketing major at Hofstra. “This is what I’m meant to do with my life. It shows it’s possible to do what I want to do.”

Tilinca, who lives in Hicksville and grew up in Stony Brook, wants to become the first transgender man to win Mr. Olympia, which is considered the premier international event in the sport of bodybuilding. It is an ambitious goal considering no transgender man has won a major professional bodybuilding competition. No less important, Tilinca said he wants to inspire other transgender young people, who may feel as lost and confused as he did.

Tilinca, named Alexandra at birth, said he knew early on he wasn’t quite like everyone else.

"I felt physically uncomfortable with myself," Tilinca said. "I felt very uncomfortable in my own skin. I was going through the motions because that's what society expected me to do.

"I feel you hit a certain age where you start realizing social expectations of girls versus boys," Tilinca said. "I would say that’s about 7 or 8. I hit an age where I realized, 'Oh, I'm a girl.' It made me feel extremely uncomfortable very quickly. I didn't really understand why. At 8 years old, for a person to be so concerned about their gender is a big red flag."

Tilinca described himself as "very outgoing," but he became more and more withdrawn as he entered middle school and spent much of his time alone in his bedroom playing video games and surfing the web.

“I didn’t like how people saw me, so I tried to avoid interactions as much as I could,” Tilinca said. “One day, I was on YouTube and I saw a video 'How I knew I was transgender.' I clicked it, and I was like, 'This is exactly how I’ve been feeling.’ ” Tilinca said that as an only child, he was always close with his parents -- mom, Monica, a lawyer, and dad, Florin, a photographer.

Tilinca said that when he was about 12 he shared what he was feeling with his parents.

"I told my mom first," Tilinca said. "I told her, 'I think I'm transgender. Do you know what that entails?'

“She said, 'I have no idea what you're talking about but I love you.' I’m really blessed with my parents because unfortunately not everyone in my position has that kind of response. For me it was a learning process as it was for my parents."

A study done at the University of Arizona and published by the American Academy of Pediatrics in 2018 showed that 50.8 percent of transgender boys who were assigned girls at birth reported having attempted suicide. According to a report by the Human Rights Campaign, the largest LGBTQ advocacy group in the United States, transgender youth experience bullying, harassment and family rejection, which are all risk factors for suicide.

“We come from a family of doctors in Europe and Europe is much more openminded about such things,” Monica Tilinca said. “We honestly didn’t know how to handle it. It’s very difficult for a parent to know what to do. We did a lot of research. We were completely fine. We still love Alex. Alex is the same person to us. We came to realize that he needed a lot of medical help. He needed to transition. It was quite a process.”

Tilinca, who is 5-foot-3 and weighs 165 pounds, said he never had an eating disorder but he struggled with his weight. After surgery two years ago, he weighed 98 pounds and was afraid to put on weight because he thought "it would go to my hips."

"At first, I had no intention of being a bodybuilder," Tilinca said. "I just wanted a little more muscle. But I really think once you get the bug, it’s very, very hard to just stop."

He started lifting weights at Ward Melville High School and then found some videos online of bodybuilders working out at Bev Francis Powerhouse Gym in Syosset.

“When I saw bodybuilding, I saw it as a tool of control over what you look like,” Tilinca said. “For someone being trans, that’s amazing. It’s really empowering. If you don’t like something, you know you can change it. It’s like sculpting your own body.”

Tilinca began documenting his transition on YouTube as he put on muscle. He also set a goal of competing in a National Physique Committee (NPC) sanctioned competition. The NPC is the largest amateur bodybuilding organization in the United States and is recognized as a steppingstone to becoming an International Federation of Bodybuilding and Fitness (IFBF) professional. The IFBF hosts the annual competition that awards the Mr. Olympia title.

Tilinca said he works out five or six times a week for about two hours a session and eats 3,200 calories a day.

Sadik Hadzovic, a two-time Mr. Olympia runner-up with 2.9 million Instagram followers, said the seemingly macho bodybuilding community is welcoming to transgender people because athletes get involved in the sport as a result of being uncomfortable about the way they look.

“I can relate to what Alex went through,” said Hadzovic, who works out at Bev’s gym with Tilinca and coached him early on. “When I was 18 years old, I hated my body. Whether you are a man or woman or transgender or not, it doesn’t make a difference. We are all the same. We just want to improve ourselves and be a little bigger, a little faster, look a little better.”

At the Victor Martinez competition, named after the runner-up at the 2007 Mr. Olympia event, Tilinca took second place in the Novice Classic Physique and the Junior Classic Physique divisions in addition to his first place finish. His showing was significant in that he insisted on competing against men whose gender identity matches the one they were assigned at birth.

Tilinca said he never told anyone in the competition he was transgender. It’s unclear what the protocol is for transgender bodybuilders in NPC competitions. The NPC did not return an email request for comment and had no stated policy on its website.

Anne Lieberman, the director of policy and programs for Athlete Ally, an advocacy group for LGBTQ athletes that has worked with the NBA and NCAA, said, “Every person has the right to participate in sport exactly how they are. No one should have to go through what transathletes have to go through on a daily basis to compete at all levels.”

Tilinca said he is driven to show the world that trans people “are not victims and can do anything they set their minds to.” This is certainly something his mother felt as she cried in the audience while Tilinca was awarded first place last August.

“It was emotional. I was overcome by happiness,” Monica Tilinca said. “We are absolutely impressed by Alex’s willingness to do anything it takes to achieve his dreams. It’s beautiful.”

Sam Darnold said news of Jets wanting to trade him was tough
1:57
Yankees get much-needed win over Rays
Isles trade for Senators defenseman Coburn
Smith hoping to remain with Rangers as trade deadline looms
Highlights: Isles vs. Rangers
Boone on starting Gardner over Frazier: All about matchups
Didn’t find what you were looking for?