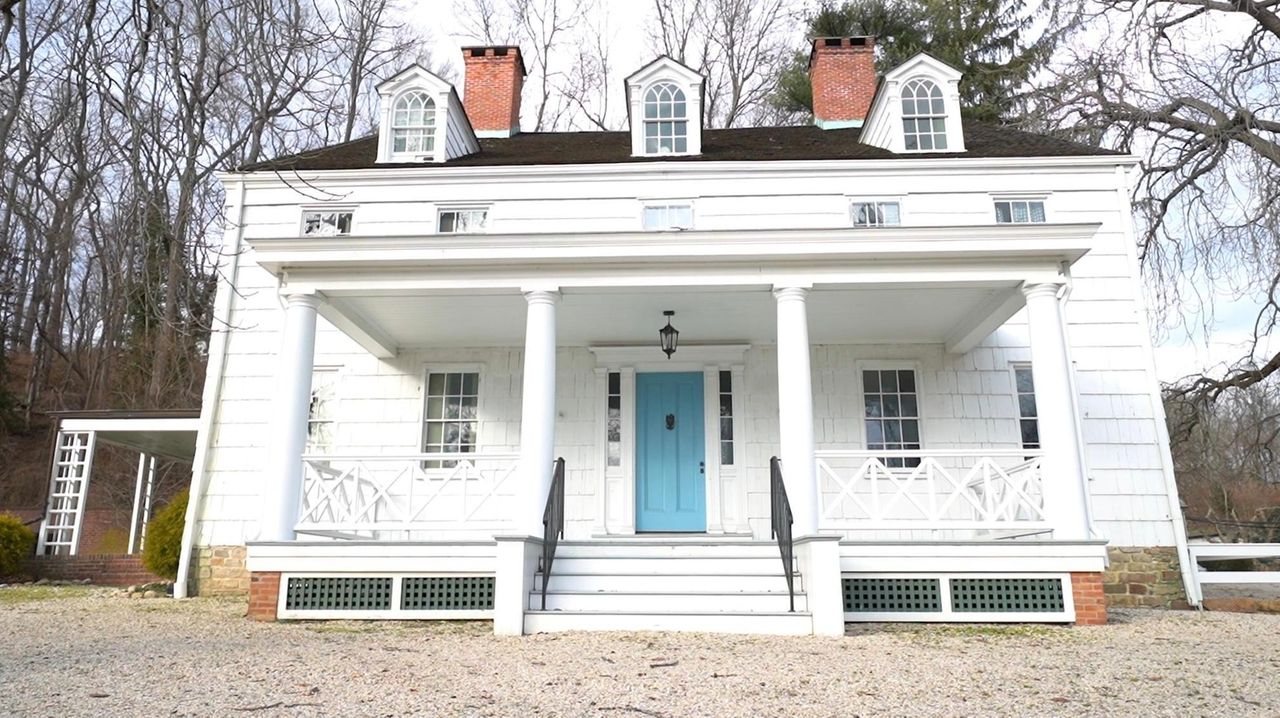 On Jan. 16, Lauren Brincat, curator of Preservation Long Island, gave Newsday a tour of the Joseph Lloyd Manor in Lloyd Harbor, where Jupiter Hammon, one of the 18th century’s most important literary voices, rose from slavery on Long Island to become the first African-American poet to be published in the United States.  Credit: Randee Daddona

During Black History Month, Long Islanders don’t have to travel far to visit significant sites that chronicle the highs and lows of 400-plus years of the African-American experience.

Here are historic homes, burial grounds and museums — spanning the Diaspora, slavery, abolition and emancipation eras to the Harlem Renaissance and beyond — that can be visited on a tank of gas or with an EZ-Pass.

One of the 18th century’s most important literary voices, Jupiter Hammon, rose from slavery on Long Island to international immortality as the first African-American poet to be published in the United States.

Two sites where Hammon lived and worked are at the edge of Caumsett State Historic Park and Preserve in Lloyd Neck. Hammon was born in 1711 at The Henry Lloyd Manor House, which is maintained by the Lloyd Harbor Historical Society. (41 Lloyd Harbor Rd.; for information on tours, call 631-424-6110, or visit lloydharborhistoricalsociety.org.

Visitors can follow Hammon’s story down the road to Joseph Lloyd Manor, a white mansion on a hill overlooking Lloyd Harbor. While working as a servant, bookkeeper and negotiator for the Lloyd family’s business, Hammon composed such early American literary classics as his 1786 address “To the Negroes of the State of New York,” said Lauren Brincat, curator of Preservation Long Island (formerly the Society for the Preservation of Long Island Antiquities). Hammon, who died about 1806, is believed to be buried in an unmarked grave on the Lloyd property.

“He [Hammon] was enslaved while he published, which is pretty unusual and which makes him significant,” Brincat said.

Hammon’s Long Island roots go back ever further, to Sylvester Manor on Shelter Island, where the future poet’s father was born and lived in slavery. The manor, originally developed in the early 1650s, remained under the same family ownership through the dawn of the 21st century, so many of the artifacts on display in its rooms are original. Visitors can walk the grounds with its mighty boxwoods year-round. Manor house tours, which include the attic sleeping quarters for the slaves who worked on the property, resume in the spring. (80 N. Ferry Rd., Shelter Island. Sylvester Manor Educational Farm, sylvestermanor.org.)

The Eastville community was a working-class neighborhood in Sag Harbor settled in the 19th century by Native Americans, European immigrants and free African-Americans who worked in the whaling industry. A self-guided tour of the area narrated by actor Alec Baldwin and Long Island native is available on an app at mytoursapp.com/apps/sag-harbor-walking-tours. A black whalers exhibition is on display through April at the headquarters of the Eastville Community Historical Society in The Heritage House, a Sears and Roebuck Catalogue Order House assembled in 1920 and occupied by an African-American family named Johnson. (139 Hampton St., Sag Harbor. Open Wednesdays from 11 a.m. - 5 p.m. or by appointment by calling 631-725-4711.)

Louis Armstrong was born in New Orleans and rose to fame as one of the Harlem Renaissance’s most brilliant artists, but when it came time to settle down, in 1943 he bought a house in Corona, Queens, living there until his death in 1971. In 2003, with the rooms much as Armstrong left them, the house opened as a museum where one of the most prized exhibits is a gold trumpet given to Satchmo by King George V in 1934. A newly curated Black History Month tour features recordings of anecdotes Armstrong made on reel-to-reel tapes. (The Louis Armstrong House Museum, 34-56 107th St., Corona, Queens, 718-478-8274, louisarmstronghouse.org. Adults/ $12, seniors over 65, students and children/$8)

Where did free black people go after they escaped the bonds of slavery? Some found their way to Weeksville, one of the nation’s largest pre-Civil War communities of free black people, founded in 1838 by James Weeks and a group of African-American investors. A museum tour visits three original Weeksville houses and a fourth reconstructed after an electrical fire, dating from the 1840s through the early 1900s. The community was also a stop on the Underground Railroad, said Rob Fields, president and executive director.

Guests can also see the current exhibition, COLLAPSE: Black Wall Street Study, by Brooklyn-based artist Damien Davis. It is inspired by the history of Greenwood, one of the early 20th century’s most prominent communities for African-American businesses in Tulsa, Oklahoma, where whites in a 1921 riot massacred hundreds of black residents.

Was Manhattan's financial district built on the graves of enslaved Africans?

Archaeologists inspecting a federal construction project in Lower Manhattan in 1991 made an astounding discovery: they unearthed a 6-acre cemetery containing more than 15,000 intact skeletal remains of enslaved and free Africans, who had lived and worked in colonial New York from the 1630s. The monument’s visitors center has exhibits on archaeology and colonial enslavement. A film, “Our Time at Last,” chronicles the discovery of the remains. (The African Burial Ground National Monument Visitor Center is on the first floor of the Ted Weiss Federal Building, 290 Broadway, in Lower Manhattan. Admission is free. Open Tuesday through Saturday, 10 a.m.-4 p.m. 212-238-4367, nps.gov/afbg).

Before she became a legendary abolitionist and suffragist, Sojourner Truth was born a slave in 1797 in the western Hudson River shore town of Esopus. A two-hour drive from New York City takes you to the towns where Truth first made her mark and an annual celebration in her honor, which attracted 200 participants last year.

For Black History Month, Frank Waters of Kingston will again be organizing a 4-mile walk from Port Ewen, where Truth lived in her childhood, to Kingston, reliving highlights in Truth’s life including her escape route to freedom. The tour will also stop at the recently rediscovered African Pine Street Burial Ground. After the walk, historic interpreter Deborah Zull of Saugerties will re-enact Truth’s famous “Ain’t I A Woman” speech at The Old Dutch Reformed Church, 272 Wall St., Kingston. (For further information call 845-282-0182 or visit blackhistorymonthkingston.org)

Mother AME Zion Church, established in 1796, is the oldest historically black congregation in New York, according to its pastor, the Rev. Malcolm J. Byrd. Visitors can tour the current sanctuary, built in 1925, where notables such as Paul Robeson worshipped and where funeral services were held for Madam C.J. Walker, the entrepreneur and first African-American millionaire. The church is also home to the Mother Zion-Dabney N. Montgomery Heritage Center, where exhibits include manumission papers from 1807 and an 1820 receipt “for the use of a black man named Ben in the Dutch Settlement area now known as East Elmhurst, Queens,” Byrd said. 140-6 W. 137th St., Manhattan. Museum open Sundays from noon-2 p.m. and by appointment. Sanctuary tours by appointment. 212-234-5700.

The Paley Center for Media

The Paley Center for Media, one of the world’s largest television and radio archives, is celebrating Black History Month with an exhibition: ''A Salute to Black Achievements in Television.'' An interactive exhibit features clips from ''The Flip Wilson Show,'' ''The Fresh Prince of Bel-Air,'' ''In Living Color,''  Everybody Hates Chris'' and props and costumes from the current ''The Daily Show with Trevor Noah'' to classics like ''The Jeffersons'' and ''Good Times.''

5 fall foliage cruises to take on LI, in NYS
9 unique ways to see fall foliage in the Northeast this season
Indoor water parks close to LI to visit this season
4 off-roading, ATV adventures to take in NYS, Pennsylvania
Amtrak travel from NYC: 3 trips to take this fall
5 resurgent NY cities to visit now
Didn’t find what you were looking for?