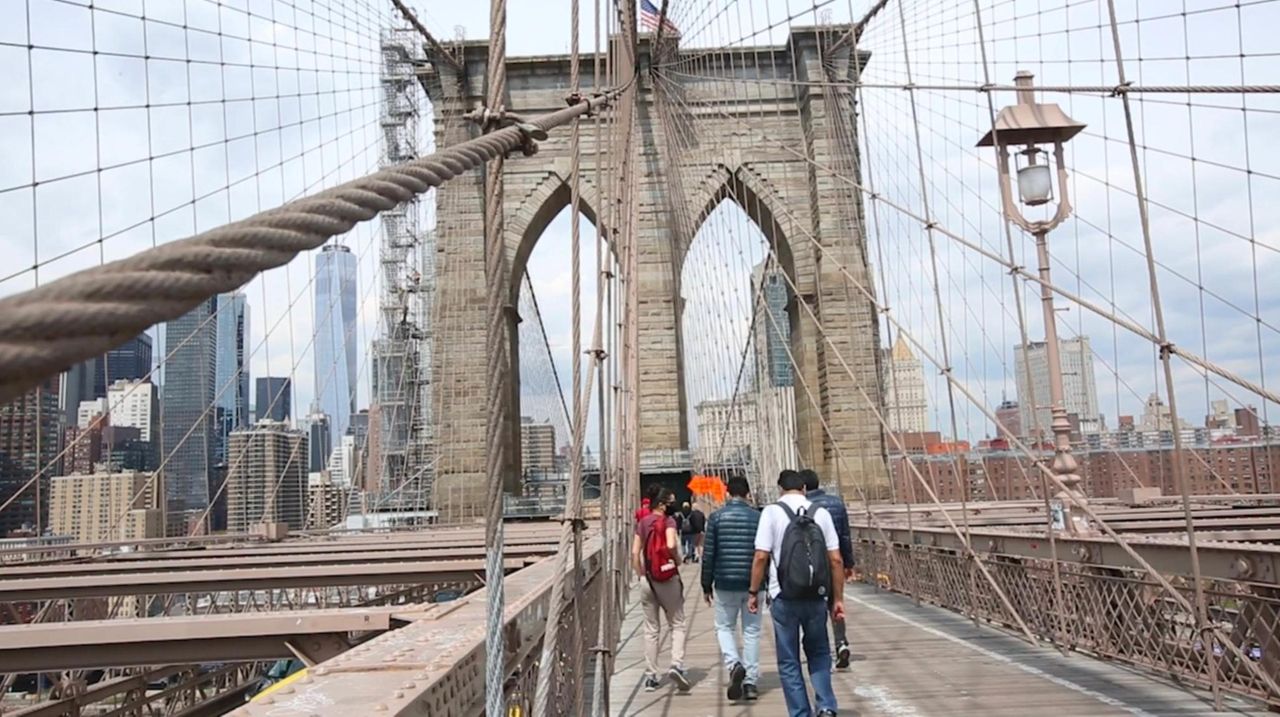 The Brooklyn Bridge handles about 30,000 pedestrians and 3,000 cyclists daily, and is more than 6,000 feet in length, according to the New York City Department of Transportation. Access to its promenade on the Brooklyn side is located at Adams and Tillary streets, while on the Manhattan side it’s along Centre Street by City Hall.  Credit: Bruce Gilbert

For some it’s a route to work or a path among boroughs, but around the world the bridges of New York City are iconic landmarks.

"New York City has about 75 bridges over waterways but the Brooklyn Bridge is in a league of its own," explains Sam Schwartz. The founder and CEO of the Sam Schwartz consultancy firm, specializing in transportation, transit and traffic engineering among other disciplines, Schwartz has also served as chief engineer and first deputy commissioner of the city’s Department of Transportation — and also provides public traffic-related information under his nickname "Gridlock Sam."

"You walk across a structure built in the 1870s and 1880s, you see buildings from the turn of last century and then see the great skyscrapers of the 21st century. ," says Schwartz.

Here are four notable bridges to explore and things to do in the area after you walk across.

The Brooklyn Bridge handles about 30,000 pedestrians and 3,000 cyclists daily, and is more than 6,000 feet in length, according to the New York City Department of Transportation. Access to its promenade on the Brooklyn side is located at Adams and Tillary streets, while on the Manhattan side it’s along Centre Street by City Hall.

Five million people walk across the bridge every year — plus about another million on bikes, says Schwartz, and cycle traffic is up about 20% since the pandemic started. "Even prior to the pandemic we were seeing a rise in active transportation in New York City.. So, more people are walking and biking across the bridge than ever before."

The Manhattan Bridge was the last bridge to be built in Manhattan's central business district and is the only East River bridge considered a pure suspension bridge.

The bridge’s lower level is 5,780 feet in length, while its upper roadway is 6,090 feet from start to finish. Pre-pandemic more than 500,000 people would cross the bridge daily, making it the most heavily used bridge in the city. Stretching between Manhattan and Brooklyn between the Brooklyn and Williamsburg bridges, it provides a similar view to the Brooklyn Bridge.

To enter from Brooklyn, the walkway begins on Jay Street between High and Sands streets; the Manhattan entrance is along the Bowery between Bayard and Canal streets.

The Brooklyn side of the Manhattan Bridge is only about three blocks from the Brooklyn Bridge, so they both share highlights. The Manhattan side leads directly into Chinatown and the venues along Canal Street or walk six blocks north along the Bowery to check out the cutting-edge art at New Museum (235 Bowery; 212-219-1222, newmuseum.org).

The bridge handles approximately 500 pedestrians and 600 cyclists daily, according to the NYC DOT. Enter from Brooklyn at S. 5th Street and S. Fifth Place (across from Holy Trinity Cathedral); in Manhattan enter at Delancey and Clinton streets. The views are mainly of the skylines, with the Manhattan Bridge to the west, but as there’s no bridge directly to its east, pedestrians can look north up the East River and see Roosevelt Island and the Ed Koch Queensboro Bridge leading into the east side of midtown.

The Williamsburg Bridge is only about 10 blocks from the Manhattan Bridge on the Lower East Side, but as the bridge leads directly to Delancey St., it easily takes pedestrians to the vendors at Essex Market (88 Essex St.; essexmarket.nyc). Katz's Delicatessen (205 E Houston S.; 212-254-2246, katzsdelicatessen.com) is about a half-mile walk from the end of the pedestrian path. If you’re walking to Williamsburg, expect to find a variety of eateries, and for some more outdoor time, Domino Park (300 Kent Ave.; 212-484-2700, dominopark.com) .

Situated north of New York City, the Cuomo Bridge — which runs between Westchester and Rockland counties — only opened its pedestrian and bike lanes in June 2020.

Floyd Lapp, a former transportation director for the NYC Department of City Planning, said the pedestrian/ bike lanes opened "with much success" between Tarrytown (in Westchester) and Nyack (Rockland). Crossing the Cuomo Bridge in one direction is a 3.1-mile journey (6 miles round-trip).

The pedestrian path is accessed from a "Westchester Landing" (333 S. Broadway, Tarrytown) and a "Rockland Landing" (1200 Route 9W, South Nyack), and both Tarrytown and Nyack are considered the "nodes" of the bridge, or the two areas of interest at each end.

You’ll then need to walk several blocks to reach the downtown areas after you’ve crossed; once in Nyack, there are many restaurants along S. Broadway and S. Franklin streets. The Village of Nyack’s Memorial Park (51 Piermont Ave.; nyack-ny.gov) offers 11 acres of space located along the Hudson River and features a playground and skateboard park. As for the Tarrytown side, highlights include the strolling path along the water at RiverWalk Park (250 W. Main St.; scenichudson.org) and live shows at Tarrytown Music Hall (13 Main St.; 914-233-3856, tarrytownmusichall.org), which is about a mile from the Landing.