Day into night in Rockaway Beach: Getting there, where to eat and things to do

We all have that distant cousin: The one who looks a little like us, lives an hour away and is always up to cool stuff, but whom we hardly ever see. For Long Island, Rockaway Beach is that cousin: Beachy like us, rich with adventure, and a relatively short drive away. We just somehow never get there because …. well, we have our own beaches, thank you.

Yet there are 101 reasons for Long Islanders to plan a day trip here, and about 99 of those involve eating. This narrow spit of land boasts enough smashburgers, arepas, vegan ice cream, jerk chicken, fish tacos and slushy cocktails to keep you sated all day (and night). But there’s also a beach that stretches as far as the eye can see, a nearly 6-mile-long boardwalk, first-class people-watching, tons of street art, and eclectic shops, plus plenty of Airbnbs and at least two stylish hotels, should you decide to extend your daycation. 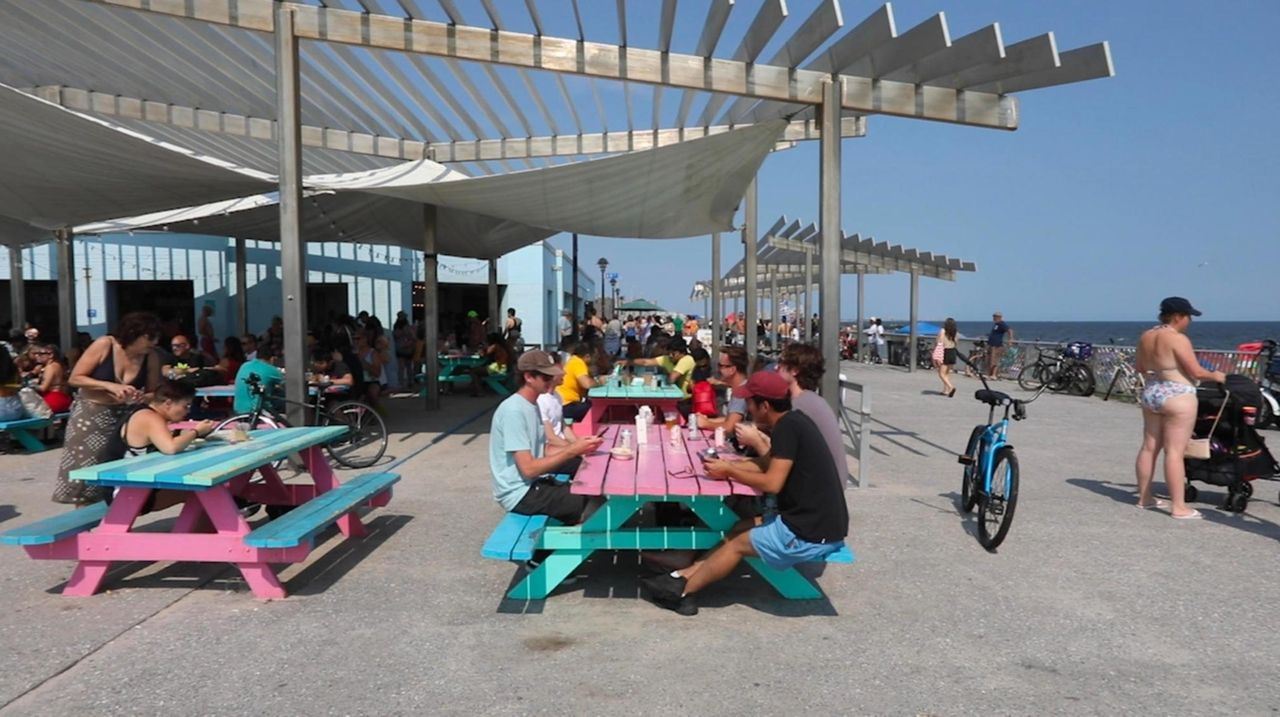 The Rockaway peninsula, which juts between Jamaica Bay and the ocean just beyond Kennedy International Airport, holds a string of diverse neighborhoods that morph from bungalows to high-rises to desolate, wind-swept dunes. It’s impossible to see it all in a few hours — but this daylong tour will reveal this unique community’s flavors, colors and textures.

The Belt Parkway to the Cross Bay Bridge is the easiest way for Long Islanders to get here, though you can also slip in from the west end of Atlantic Beach or the Five Towns. So skip breakfast at home, cue up some Ramones and aim your car across Broad Channel and into the heart of Rockaway Beach. Or, if you prefer to leave the car at home, take a Long Island Rail Road train to Far Rockaway then catch a nearby Q22 bus to Rockaway Beach, or catch a ride-sharing service from the station.

A beach towel is our morning destination, but you’ll need supplies, and the east-west artery Rockaway Beach Boulevard is where most businesses cluster. Parking is a challenge on these stubby cross streets — if you find street parking early, hang onto it like gold and consider taking a bus or Uber around town. If you can bring your bike, even better — or rent one from Boarders Surf Shop at Beach 92th Street.. (Alternatively, you could park in the commercial lot at Beach 108th Street, one of the only such lots in town).

To turbo-fuel the day, grab a speck-and-egg breakfast sandwich from the takeout window of Bernadette’s, a cute spot on Beach 96th street painted the color of the ocean depths, a deep turquoise. Definitely supplement it with a dragonfruit smoothie and a cup of Tanzanian coffee from The Cradle NYC, a West-African cafe next door that began as a boardwalk food cart; owners Pesy Therese and Babajide Alao have a nearby farm. (Come back later for some jollof rice).

Head west, young grasshopper. Well, at least as far west as Jacob Riis Park, a graceful beach about a 10-minute drive past the neighborhoods of Belle Harbor and Neponsit. The sweeping sand is peopled with a mellow mix of families and young beachgoers, many of whom have taken the ferry from the city. (Car parking is $20).

Named for the 19th-century photojournalist, Jacob Riis Park was unveiled in the 1930s and became known as both "the people’s beach" and a safe hangout for LGBTQ community. The surf looks gentle enough, but the beaches of the Rockaways are known for their strong currents — so be vigilant.

The art-deco bathhouse here is striking (inside, it’s as muddy as you’d expect), and also serves as a visual marker for adjacent Riis Park Food Bazaar, a crescent of food vendors fronted by a picnic area.

If you must, there are açaí bowls, but standouts are the battered cod "fishwich" and caramelized Brussels sprouts from the Rockaway Clam Bar and the ultra-rich ice cream from Brooklyn-based OddFellows Ice Cream Co. — in flavors such as key lime pie or chocotorta, a cream-cheese ice cream with swirls of dulce de leche; either one might send you straight into a beach-blanket nap.

Maybe afternoon storm clouds are brewing, or maybe it’s just time to escape the sun for a little while. Find cool late-afternoon respite inside Avoid the Day Bookstore & Cafe, opened by Jianna and Jason Heuer in the not-so-fortuitous month of February 2020.

The Heuers, who both worked in publishing (Jason Heuer still designs book covers), fell in love with the creative community of the Rockaways years ago, decamping from Astoria to the beach. "Rockaway is like our weird suburb and the bookstore is like our child," joked Jason Heuer.

As you browse books both used and new — with a vein of Rockaway- and surfing-centric titles — Jason Heuer can pour you a cold brew or glass of wine for settling into the counter with a locally baked cookie and a fresh read. If in a shopping mood, a few blocks away you’ll find chockablock dresses, bags and curios inside Zingara Vintage, run by Suffok County native Erin Silvers, who if she’s here bubbles over with local intel and tips.

One of the hardest things about a day in the Rockaways is not eating until you fall over. Because this a penultimate street-food destination, though, it is your solemn duty to soldier on. At the boardwalk and Beach 97th Street, a vibrant scene unfolds in front of a pavilion with another trove of vendors serving Peruvian-style ceviche (from La Cevicheria), wood-fired pizza (from Seany Slices), arepas (from Palenque) and kaleidoscopic vegetarian Mexican food (from Breezy & The Vegwolf); owner Erica Frost’s vegetarian nachos, showered in crumbled queso and "chorizo," will fool a sworn carnivore.

The pastel picnic tables here are superb for people-watching or even meeting new friends; for a mellower vibe, head a quick walk (or ride) down the boardwalk to Rippers at Beach 86th Street. The grass-fed burgers, wrapped in checkerboard paper, are squishy, satisfying and locally beloved.

It’s 5 o’clock somewhere, especially here, and if you haven’t started drinking beer or "beach juice" at Rippers, you are probably two steps ahead (or behind) everyone around you. The drinks come at premium at Rockaway Beach Surf Club, which isn’t on the beach at all (it’s under the A Train) but feels like a psychedelic tropical shack. Its main draw is as the home of Tacoway Beach, the modern incarnation of cult-favorite food truck Rockaway Taco. The lush patio is a Gen-Z hangout, the fish tacos are unfussy and the plastic-cup margaritas…..well, you get the idea.

Farther east, the neighborhood of Arverne — a stretch of newish condos in the Beach 70s — harbors a quieter beach and a few solid hangouts, among them Rockaway Tiki Bar, where rum-heavy mai tais and "pain chillers" (a frozen painkiller) await, as do bar bites like crispy mushroom bao buns and togarashi-dusted fries. For a more traditional sit-down dinner, the shoulder-to-shoulder places along Rockaway Beach Boulevard boast ramen, Jamaican barbecue, and even an Uzbek place called Uma’s where you can fortify with plov (barberry-studded rice pilaf) or manti, aka steamed dumplings.

At this point, you may be calling it a night — it’s been 12 hours, after all, but who’s counting. Yet this staycation is not complete without a view of Rockaway Beach at sunset and from on high. That would be on the sixth floor of the Rockaway Hotel, a splashy place that opened late last summer.

There are multiple nooks to play: A poolside bar and patio with cabanas, a ground-floor seafood restaurant called Margie’s, and The Rooftop, a pair of patios (one each overlooking the ocean and the bay) joined by a lazy, elegant bar. If you hang around long enough on a weekend night, there are DJs; and if evening turns to late night, rooms here start at $425 or so.

5 fall foliage cruises to take on LI, in NYS
9 unique ways to see fall foliage in the Northeast this season
Indoor water parks close to LI to visit this season
4 off-roading, ATV adventures to take in NYS, Pennsylvania
Amtrak travel from NYC: 3 trips to take this fall
5 resurgent NY cities to visit now
Didn’t find what you were looking for?