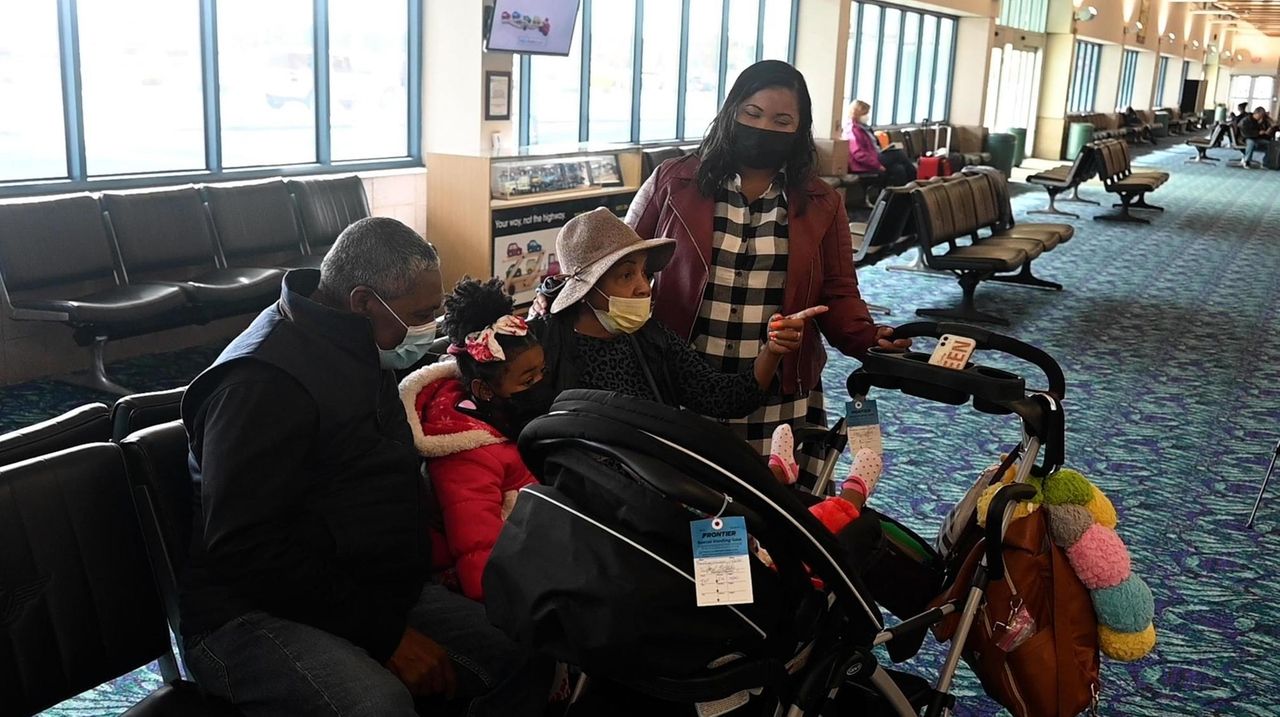 Long Islanders should plan for a pre-pandemic style Thanksgiving rush, officials said, with busier roads and airports clogged like Saturday, when 2.2 million passed through checkpoints nationwide.

Officials credit the boost in airline travel to increased COVID-19 vaccination rates and President Joe Biden’s decision earlier this month to reopen the nation’s borders to vaccinated foreign travelers after 18 months of restrictions.

"It’s no surprise, people have been cooped up for 18 months," AAA Northeast spokesman Robert Sinclair said Sunday. "People are ready to travel."

More than 53 million Americans are predicted to travel for Thanksgiving this year, a 13% bump over 2020. Air travel is expected to spike by 80% compared to last year, AAA said. Monday, Tuesday and especially Wednesday will be busy at Kennedy, LaGuardia and other area regional airports, Sinclair said.

At Long Island MacArthur Airport, Dan Farnham of Montauk said so far so good as he waited for a flight to Orlando, Florida, where he will spend Thanksgiving.

"I don't see any issues so far," Farnham said. "We are ahead of the rush at this point."

Gasoline prices remain high in Suffolk and Nassau counties but Sinclair said that should not keep travelers off Long Island highways this week. The average price for a gallon of regular was $3.555 on Sunday, up from $3.549 last week and $2.137 a year ago.

The Long Island Rail Road, meanwhile, announced that 12 extra trains will depart from Penn Station between 12:45 p.m. and 4:15 p.m. on Wednesday, including four additional trains on the Babylon branch, three on the Port Jefferson/Huntington branch, and one each on the Far Rockaway, Montauk and Port Washington branches. Times are available on the LIRR TrainTime app and MTA.info trip planning tools.

The LIRR will operate on a weekend/holiday schedule Thursday, with extra service scheduled for before and after the Macy’s Thanksgiving Day Parade. There will be six extra westbound trains originating on Long Island between 6 a.m. and 7:45 a.m. [two each on the Babylon branch and Ronkonkoma branch, and one each on the Montauk and Port Jefferson branches]. Eleven extra eastbound trains will depart Penn Station between 11 a.m. and 1:35 p.m. [four each on the Babylon and Ronkonkoma branches, two on the Port Jefferson/Huntington branch and one on the Montauk branch].

The LIRR will operate on a regular weekday schedule on Friday. Lower, off-peak fares are in effect on LIRR trains at all times for the rest of 2021.

Tips for traveling, gatherings and COVID-19 at-home testsHere's a guide for what you need to know to stay safe if you're planning to travel, join a gathering or host at home. Plus, the latest on at-home rapid tests and booster shots.

Questions about the omicron variant and travel, answered
Legoland, Rocking Horse Ranch more: 5 family-friendly resorts in NYS to visit this winter
6 children's museums to visit in New York State this winter
Ski big and go home: 6 nearby resorts for LIers to hit the slopes this winter
The new Disney World hacks: How to skip lines, restaurants to try and meet Mickey
Spending the day at the American Dream amusement center in NJ
Didn’t find what you were looking for?